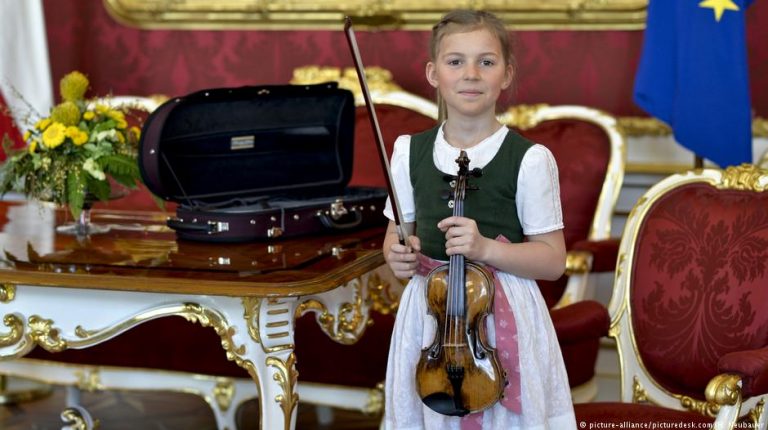 Austrian leaders have undertaken a state visit to China aimed at boosting bilateral economic ties. The delegation also includes a 7-year-old musician who will play a violin used by the young Mozart.Austrian Chancellor Sebastian Kurz and President Alexander Van der Bellen are to be received by Chinese President Xi Jinping on Sunday for political talks.

Kurz and Van der Bellen are at the head of what is the largest delegation in Austria's diplomatic history, with 250 members.

The leaders are also set to hold talks with Premier Li Keqiang, among others. Van der Bellen plans to meet with Chinese human rights activists as well.

The delegation, which also includes several ministers, intends to sign economic agreements worth some €1.5 billion ($1.84 billion) involving 150 Austrian companies. The visit is also focusing on bilateral ties in agriculture and environmental affairs, as well as China's planned rail transport link to Europe.

Austria, which will hold the rotating EU presidency in the second half of this year, intends to focus on EU-Asian ties during that period. China is Austria's second largest non-European trade partner after the United States.

The visit is also to feature a cultural note reflecting Austria's rich history as a musical nation: At a state banquet in Beijing, the 7-year-old Austrian musician Anna Cäcilia Pföss will perform on the violin used by the famous 18th-century Austrian composer Wolfgang Amadeus Mozart as a child.

"Anna Cäcilia Pföss will accompany us as a musical ambassador to China and will represent Austria as a cultural nation. I'm sure she will do an excellent job," Van der Bellen said on Friday before the delegation departed Austria.

Pföss' concert will include minuets by Mozart, who achieved fame early on as a brilliant pianist, violinist and composer. His first documented work is a minuet and trio for piano written when he was just 5 years old.

The young Mozart's violin was probably made around 1740, and was then owned by his sister, Maria Anna — better known as Nannerl — until 1820. It is normally exhibited in Mozart's birthplace in Salzburg.