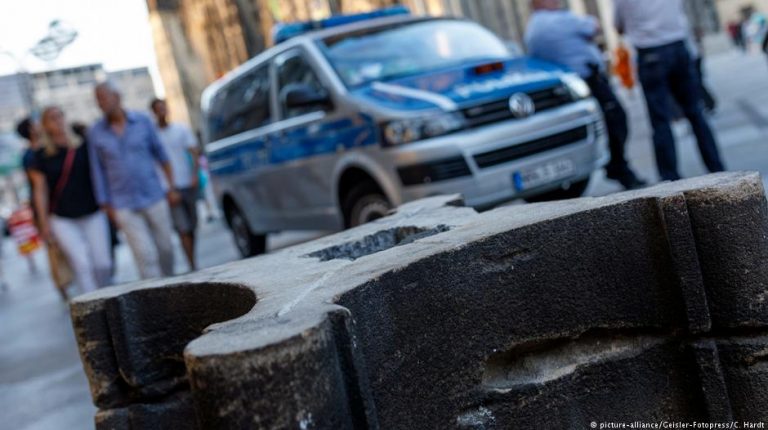 In the wake of the deadly attack with a van in Münster, many reports noted that the city was about install bollards in the downtown area. But do barriers really offer protection? Experts say effectiveness has its price.It seems like a cruel irony. In response to the deadly terrorist attacks with vehicles in Nice, Barcelona, London, Stockholm and at a Christmas market in Berlin, Münster had plans in place to install bollards ahead of next month’s German Catholic Convention — only for an attacker to drive a van into a crowd of people before the barriers had been put up.

The reality, however, is different. The attacker in Münster seems to have no connections to Islamist terrorism. And the planned bollards wouldn’t have helped prevent Saturday’s attack because the streets in question weren’t among those to be protected.

One obvious weakness with bollards and other protective barriers is that decisions about where to place them have no margin for error. And yet after every vehicular attack, more and more cities invest large sums in such barriers.

Read more: Madrid to Manchester to Barcelona: A chronology of terror in Europe

New York City, for instance, earmarked 50 million dollars (41 million euros) for high-security metal bollards after the attack by a pick-up truck on the October 31. Münster’s plans include bollards at a cost of 20,000 euros each at thirteen locations.

In Australia, thousands of simple concrete “jersey blocks” were installed in the country’s major cities. They are far cheaper than classic metal bollards, but experts question their effectiveness. So what should cities do to protect themselves?

Concrete blocks no match for trucks at 50 kmh

A whole industry has sprung up with the increasing frequency of vehicular attacks on so-called soft targets such as highly frequented shopping streets and outdoor markets and concerts. There are scores of manufacturers in Germany and around the world, and barriers come in a whole spectrum of shapes and sizes, from classic steel bollards that retract into the ground to lightweight containers filled with water to ramps and x-shaped barriers designed to upend vehicles.

The barriers most commonly used to protect events in Germany after the 2016 Christmas market attacks are concrete blocks that can be moved from place to place. But a series of high-profile crash tests carried out by the German Motor Vehicle Inspection Association (DEKRA) last year found that what are colloquially known as “Nice stones” in Germany were only of limited use in stopping attacks by heavy trucks. In tests, trucks driving at 50 kilometers an hour simply ploughed through the blocks, first coming to a full halt up to 80 meters behind the barrier.

“The concrete blocks don’t do much to stop anything,” DEKRA Test Director Marcus Gärtner told TV station MDR, which filmed the experiments.

In a separate set of tests, DEKRA tried out more sophisticated movable security systems but also found them to be deficient.

A private test carried out by a German producer on a three pointed metal star also attracted considerable attention after the driver of the truck was seriously injured. Nonetheless, the design proved more effective than the concrete blocks, stopping the truck after only ten meters.

“The truck got lifted up, lost speed and was ultimately destroyed,” Echkard Stolz, a professor Leipzig University of applied science told MDR.

But barriers made of metal are considerably more expensive than concrete ones. And it’s debatable whether people would tolerate ferocious-looking three-pointed hunks of metal in historic city centers.

Another idea is to link concrete blocks like puzzle pieces to form a chain. In computer simulations, this system was projected to be effective and is relatively cheap to produce, but assembly is complicated.

Effective but worth it?

The highest security-grade cylindrical metal bollards in the US are capable of stopping seven-ton trucks travelling at around 80 kilometers an hour, but there is disagreement about whether they are worth their often enormous cost.

When asked about their effectiveness, Jon Coaffee, a professor of urban geography at the University of Warwick, told the New York magazine The Village Voice, that anti-attack bollards were “incredibly effective at stopping vehicles from entering urban spaces.” For that reason, Coafee added, they had become a “default option.”

The New York City bollards cost an estimate $30,000 (€24,400) per unit. A project manager for a leading US bollard manufacturer told a newspaper in Milwaukee, where some 400 of the barriers are being installed to protect the city’s new basketball arena, that the bollard industry was worth $500 million in the US alone. Those sums, say critics, are disproportionately large.

“The anti-terrorism industrial complex has completely warped our national conversation about public safety,” city planner and author Jeff Speck told The Village Voice. “Why have we thrown untold trillions of dollars at a threat that is, at last measure, 568 times less deadly than car crashes?”

Other far less costly measures, such as automatic braking systems for trucks and other heavy vehicles, are also seen as a way of reducing the danger of intentional vehicular assaults. But there is clearly no magic formula at present for cities to protect themselves against these sorts of attacks.