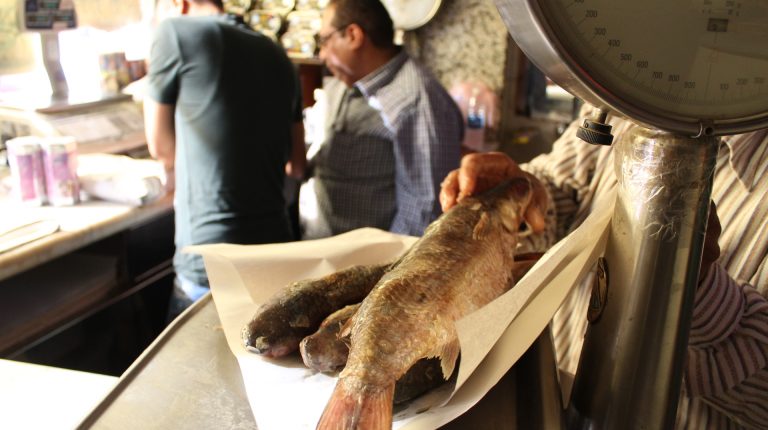 “It is the best shop to sell salted fish in Egypt,” answered a fruit seller sitting at the main gate to the ancient Bab Al-Louq market in the Abdeen district of Downtown, when asked about “Fasakhany el Harameen”, a very old shop named after the Two Holy Mosques, specialising in selling all kinds of slated fish, a traditional food Egyptians are used to eating with family and beloved ones to celebrate Sham Ennessim.

The national holiday, which marks the beginning of spring, is a traditional event that dates back hundreds of years in Egypt, as people usually head to public parks and beaches to celebrate the event, by eating salted fish which is prepared in a special way. The fish varieties include feseekh, herring, and sardine, as children colour eggs on the day that always falls directly after Orthodox Christian Easter.

Down a narrow passage is the small ‘Harameen’ shop, owned by Mohamed Sayed, an imam of a mosque. “I have inherited the profession of selling and preparing salted fish from my father,” Sayed told Daily News Egypt, adding that his father started their business in 1940, in the same place, and he has followed his path to this day.

“In the 1980s and before that, Bab Al-Louq market had been a destination for people from outside Cairo, who came to buy everything including salted fish from our shop. There were like thousands of buyers, but now the situation changed,” referring to rising rent, electricity, and water fees, as well as the prices of the fish itself. “We have to raise our prices too, we do not have another option,” said Sayed.

However, he said that people used to buying from him each year still come and buy the

same quantities. “People eat salted fish to enjoy the holiday with their family, so they do not mind paying extra once a year,” he said, also noting that prices depend on the neighbourhood. “I have a friend in Maadi that sells a kg of feseekh for EGP 200; here I sell it for EGP 170.”

The prices of feseekh and herring have increased over last year by nearly EGP 40, as prices of food spiked following the floating of the pound in November 2016. According to a February 2017 Central Agency for Public Mobilisation and Statistics report, fish and seafood prices increased by 40.3%.

The price of a kg of feseekh ranges from EGP 160-170, while the price of herring ranges from EGP 50-60. “Some people, after asking about prices before buying, they sometimes change their mind and buy less than they need,” Sayed said. He added that the economic situation makes people very stressed. “Look at faces of people in the streets; they are unhappy, worried, and depressed,” Sayed said. He recalled the holidays he used to have when he was child and said, “people were cheerful and enjoying their time. Now I rarely notice the same atmosphere.”

According to Sayed, what contributes to his family’s success in this business is that they are always developing their work. “I know well what my clients want to eat, so I prepare it for them as they wish. Some like the fish very salted and others only slightly, so with experience, I am more familiar with their preferences.”

Though the Ministry of Health always warns against eating feseekh, people continue to buy it from what they consider to be trusted places, to avoid botulism poisoning that can sometimes lead to death.

Sayed said that the Ministry of Health’s warnings have a huge impact on the business: “sometimes people fear eating salted fish, but places that have a good reputation should not worry.”

At Shaheen for Salted Fish and Caviar, a family-run shop in Downtown Cairo, which dates to nearly 100 years ago, Shady Shaheen, one of the people who run the business, said that the Ministry of Health’s instructions to avoid eating feseekh are actually a form of positive advertising, noting, “this enhances our work because our fish is properly prepared.” He added that business volume is solid this year, as people have confidence in his business.

“We trust this shop, so we come here every year,” said Ayman Hussien, a business owner, while he was waiting for his order to be prepared. Hussien said that the high prices do not discourage him from buying salted fish as a gift for his family and relatives. “Prices increased by nearly EGP 50. It’s okay, they are not very high,” noted Hussien.

In contrast, Mona, a housewife who used to buy between 3 kg and 4 kg of feseekh every year for her mother and daughter, said she now buys just 2 kg because of the soaring prices. Meanwhile, another woman, Mervat, noted that she just buys the same 2 kg of herring each year, saying, “whether prices are high or not, I just buy 2 kg for my family.”

Hadyaa Abdel Aziz and her husband said they can no longer afford to buy the same quantity they used to purchase for their families and relatives. “Actually, [the quantity] becomes less and less due to high prices,” said Hadyaa, noting that she does not eat feseekh. “My husband and children like it very much.” Her Husband, Ashraf Emad, an official at the Ministry of Finance, commented on her words with a smile, saying that the holiday is a tradition that gathers people to have a good time: “we get together to enjoy eating salted fish.”

While people celebrate Sham Ennessim, Shaheen and his brothers have to work at their shop: “unfortunately we don’t celebrate like others, we have to work during the holiday.”

This generation of the Shaheens, including Shady and his brothers, resort to social media to enhance their relations with clients, receiving complaints and feedback. They set up a Facebook page after the name of their shop as well as a chat group on WhatsApp. They also seek to open a new restaurant to serve healthy ready-to-eat salted fish meals.

Shaheen, who studied at a Faculty of Commerce, grew up adoring his father’s profession. He said he wants his children to recognise it too: “I hope my kids and nephews would appreciate our work. I want them to hold university degrees along with [working for] our business.” He went on to say, laughing, “they have to eat salted fish too, it is a rule in the family.”

Ramadan beneath the surface: Fish at Farag since Farouk times