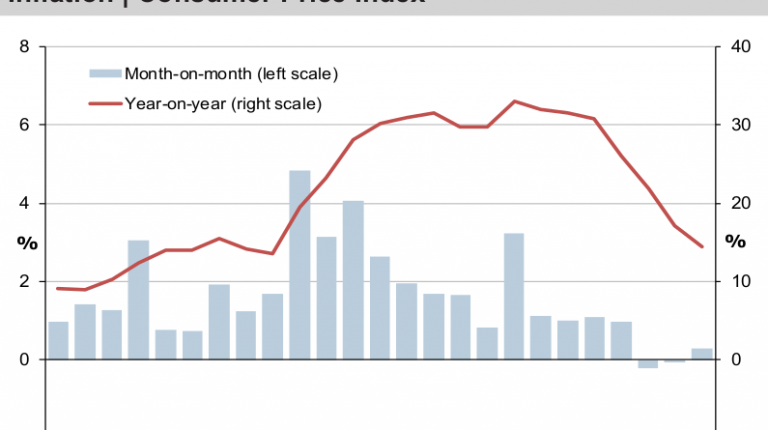 FocusEconomics panelists expect total investment to grow 8.1% in fiscal year 2018, which is unchanged from last month’s forecast, and 8.5% in FY 2019.

Inflation declines for seventh consecutive month in February, according to the report. The report explained that in February, urban consumer prices rose 0.29% from the previous month, contrasting January’s 0.06% decline. February’s increase was driven by higher prices for food and non-alcoholic beverages—particularly poultry and rice, which were partially offset by seasonally lower prices for clothing and footwear.

“Urban inflation continued to drop sharply, falling from 17.1% in January to 14.4% in February, marking the seventh consecutive decrease and the lowest figure since October 2016. Core urban inflation moved in lockstep, falling to 11.9% from 14.4% in the prior month, with both indicators affected by favourable base effects and tight monetary conditions. Meanwhile, annual average inflation fell from 28.4% in January to 26.9% in February,” the report read.

FocusEconomics sees that inflation should continue its downward trend as the impact of past reform measures lessens, although further subsidy cuts could see price pressures briefly flare up again later this year.

At its 29 March Monetary Policy Committee meeting, the Central Bank of Egypt (CBE) slashed all its key interest rates by 100 basis points. The overnight deposit rate was cut to 16.75%, the overnight lending rate to 17.75%, and the main operation rate to 17.25%. All decisions were in line with market expectations.

The report explained that the move to loosen monetary policy came after price pressures ebbed further in February, with both headline and core inflation dropping to over one-year lows, as the impact of subsidy cuts, tax hikes, and the depreciation of the pound continued to diminish.

Headline inflation now lies within the CBE’s target range for Q4 2018 of 10.0–16.0%. By easing its stance, the CBE hopes to boost lending and thus aid investment and consumption, as both firms and consumers are currently hampered by high borrowing costs. However, nominal interest rates remain elevated by historical standards, to ensure inflation continues its downward trajectory.

The report also pointed out that growth should accelerate in FY 2018. Investment should expand at a rapid pace, aided by an improved regulatory environment—thanks in large part to several recent measures, such as new investment, bankruptcy, and industrial licensing laws. In addition, the external sector will continue to benefit from the weaker pound. However, the elevated debt burden and sizeable budget deficit pose downside risks.