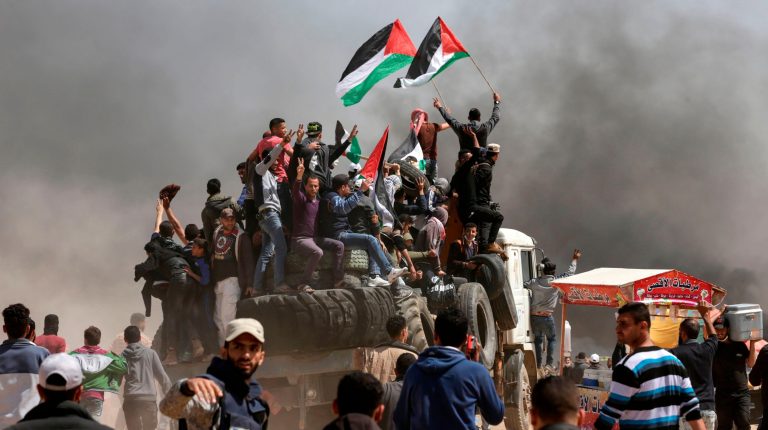 A death toll exceeding 30 Palestinians and hundreds of others injured were the result of Israeli fire during a week of protests which reached a peak on Friday, amid anticipated fears of bloodshed and threats by Israel ahead of the Great Return March.

According to the Palestinian Health Ministry on Friday, more than 2,500 people were wounded since last week in the Gaza Strip and the West Bank, including dozens of women and children.

Since the US recognition of Jerusalem as the capital of Israel on 6 December 2017, 64 Palestinians have been killed and more than 10,000 injured, according to the ministry.

Last week, the Palestinian Authority cabinet condemned Israeli violence against peaceful protesters on Friday 30 March, when at least 18 Palestinian citizens were killed and more than 1,450 injured on Land Day demonstrations which took place near the Gaza border.

“The massacre committed by the forces of occupation was premeditated, through a series of threats issued by [Prime Minister Benjamin Netanyahu] and sending out snipers, artillery, and thousands of soldiers shooting at unarmed citizens, despite already being informed of the organisation of peaceful protests,” the cabinet stated.

Land Day, celebrated on 30 March, symbolises Palestinian resistance and annually commemorates events in 1976 when Israeli forces killed six unarmed citizens and wounded and arrested hundreds, in a day of general strikes and protests against Israel’s plan to confiscate Palestinian lands for settlement purposes.

The Palestinian cabinet demanded an international investigation and accountability for Israel, stating that the silence of international bodies fuels Israeli arrogance.

“This tragedy underlines the urgency of revitalising the peace process aiming at creating the conditions for a return to meaningful negotiations for a peaceful solution that will allow Palestinians and Israelis to live side by side peacefully and in security,” the statement said.

The UN Security Council held an emergency session simultaneously, where the deputy UN political affairs chief reported that Israeli forces used live ammunition on demonstrators despite them staying away from the border fence and not engaging in violence. He also voiced Israel’s claims that “militants tried to get through the fence in an attempt to plant explosives.”

For her part, EU High Representative for Foreign Affairs Federica Mogherini said on Saturday that “the use of live ammunition should, in particular, be part of an independent and transparent investigation.”

Israel rejected such calls and renewed its threats ahead of renewed protests plans. Last Saturday, the US blocked a draft UNSC resolution to conduct investigations, presented by Kuwait.

The Palestinian refugees issue is the chore of the cause, as put by the International Coordination Committee of the Great Return March (GRM) managed by Palestinian activist Zaher Birawi.

The committee, calling for weeks of protests, states that the march “will only end with the actual return of Palestinian refugees and the sit-in may last for weeks or months.”

The group defines the march as a movement by social and political factions who organise peaceful protests aiming to call for the right of refugees to return to their homes which they were forcibly displaced from under occupation in 1948.

According to UN General Assembly Resolution 194, “refugees wishing to return to their homes and live at peace with their neighbours should be permitted to do so at the earliest practicable date, and that compensation should be paid for the property of those choosing not to return and for loss of or damage to property which, under principles of international law or equity, should be made good by the Governments or authorities responsible.”

Tens of thousands were reported to be preparing for the second week of protests. At least 300,000 protesters were out during the first one.

One of the most remarkable scenes of the second protest was heavy smoke rising from Gaza, as demonstrators set fire to tyres on the border, taking advantage of the wind direction towards Israel.

Protests are scheduled to continue, especially amid planned demonstrations on Naqba Day on 14 May, the date Israel celebrates its establishment and promised by the US to be further coronated by opening its embassy in Jerusalem on that day.

As the first protests erupted in March, Israel threatened with violence. Ofir Gendelman, spokesperson of the Israeli Prime Minister Office for the Arab media, posted to his Twitter account  a video of a Palestinian man being shot in the leg, with a caption reading: “This is the least anyone who attempts to cross the wall between Gaza and Israel would face,” using “march of chaos” as a hashtag.

The tweet echoed similar threats made by Chief of Staff Gadi Eisenkot, who said in an interview with Yedioth Ahronoth on 28 March that the Israeli Defence Forces had deployed 100 sharpshooters at the Gaza border, saying they had permission to fire “if lives are in jeopardy.”

Israeli officials, including Defence Minister Avigdor Liberman, have repeatedly claimed that Hamas was risking people’s lives by encouraging them to take part in the protests, telling Palestinians not to participate and warning them against nearing the borders.

Following the violence of 30 March, regarding an inquiry into the killings, Lieberman told the media that there will not be one and that Israeli soldiers deserve “a medal”. He reportedly warned of a much harsher response to protests scheduled for 6 April.

France had called on Israel to show restraint, respect its duty to protect civilians, and highlighted Palestinians’ right to peaceful demonstrations.

Rights groups did not fail to note Israeli abuses and unjustified use of excessive violence.

A report by Human Rights Watch said senior Israeli officials who called for the use of live ammunition bear responsibility for the killings of at least 14 protestors and the injuries of a hundred others last week.

Although Israel had warned that it would stand the in face of any action threatening its border security, it presented no evidence that this has been the case or that firearms were used by demonstrators, HRW added.

For its part, Amnesty International called “on the Israeli authorities to put an immediate end to its heavy handed, and often lethal, suppression of Palestinian demonstrations,” in a statement on 31 March.

“The Israeli authorities are obligated to respect the right to peaceful protest and, even if violence may occur, only the minimum force necessary to address it can be used. Having consistently ignored the human rights of Palestinian refugees for 70 years, Israel must at least hear their demands and allow peaceful demonstrations and protests to take place.”

Egypt’s Ministry of Foreign Affairs condemned Israel’s use of excessive force against unarmed civilians demanding their “legitimate and fair rights,” pointing to the international community’s responsibility to help Palestinians secure their rights.

A number of Arab countries also voiced criticism of Israel, with some protests erupting in solidarity with the Palestinian people.

However, the timing of the events coincided with statements made by Saudi Crown Prince Mohamed bin Salman, who, in a rare occasion, stated that Israel has the right to exist and have its own land.

Talal Salman, Lebanese journalist and founder of Al-Safir newspaper, has written a series of pieces in the Egyptian privately-owned Al-Shorouk newspaper on how Arabs drifted away from the Palestinian cause in order to get close to Washington.

In one of his recent pieces, published on 3 April, Salman said the “Israeli atrocities” during the Land Day protests barely made the headlines of Arab news as other priorities took over, condemning the weak reaction of Arab leaders and institutions.

Salman charged that Arab countries were completely normalising relations with Tel Aviv without realising that the Palestinian cause is at the heart of shaping the future of the region.