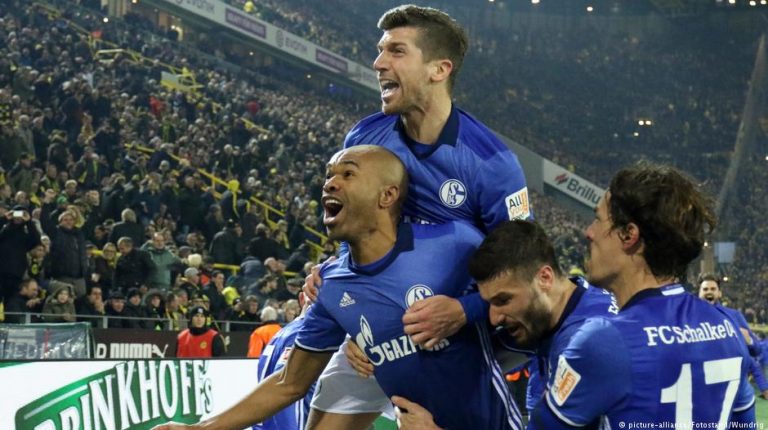 Schalke and Dortmund are gearing up for a potentially pivotal Ruhr Derby on Sunday. Schalke are only a point clear of their rivals, and with November’s 4-4 still fresh in the memory, hopes are high for another classic.The Bundesliga has come under a lot of scrutiny this season. Fears over a lack of competition, the implementation of an imperfect technology, a concerningly poor showing by their clubs in Europe — there are causes for concern across German football. One of the silver linings though, has always been its football rivalries and on Matchday 30 the country’s greatest will deliver it’s latest edition.

Borussia Dortmund against Schalke is the Bundesliga’s most complete fixture. A real rivalry between two teams from two cities separated by just 30 kilometers, both in the heart of Germany’s industrial Ruhr region, supported by two sets of ferociously passionate fans. While neither side would ever admit it, it’s like two siblings have a biannual fight.

Victory for Dortmund in Gelsenkirchen would not only mean winning back pride after the fixture earlier this season, but would also see them leapfrog Schalke to claim second spot. Dortmund have not lost any of their last six meetings with Schalke, and the hosts have won their last three at home.

There’s no denying Domenico Tedesco has made a spectacular start at Schalke, but a home win and a four-goal comeback in his first season in charge would be quite the statement. For Dortmund, victory here will not only make their end goal more possible but will also be a much-needed plus point when this season is reviewed.

While Dortmund have grown in ways Schalke still dream of, the Ruhr derby remains a close contest of a uniquely fierce nature, unlike Der Klassiker. The breathtaking fixture earlier in the season was perhaps the best evidence to support that.

— Hamburg want to make the impossible possible, but to do so will need at least a point against the league’s in-form team. Hoffenheim have the best record in the league in the last six games, having not lost any of them. Hamburg will be without Kyriakos Papadopoulos, who is suspended, as is Mark Uth for Hoffenheim. While HSV ended a run of 15 winless games last weekend against Schalke, they will need more victories to keep the pressure up on Mainz, who are five points clear in the relegation playoff spot.

— Leverkusen take on Frankfurt in another battle for Europe. In the 65 meetings between the two, there has never been a 0-0 which bodes well for the neutral. Frankfurt, though, are perhaps a little more nervous going into this one as they have lost four of the last five meetings.

— On Monday night, Freiburg host Mainz in a game that could all but decide the relegation battle. Mainz might not have won in six, but are heading in the right direction after drawing their last two. Freiburg, on the other hand, are hitting the wrong form at the wrong time. A run of six games without a win includes three straight defeats in their last three games. On top of that, they’ve only scored four goals in their last nine games.