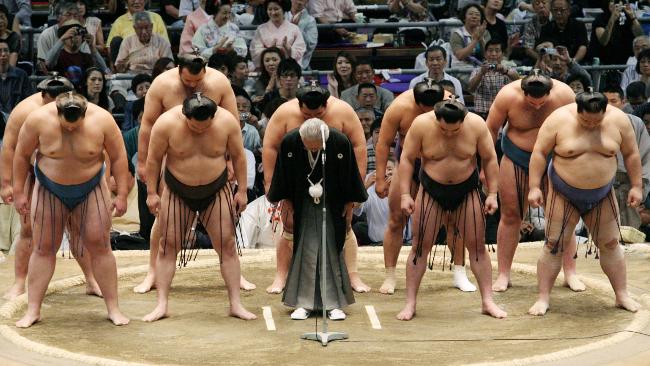 Sumo wrestling, one of Japan’s oldest and most hallowed sports, is known for its large fighters. Many believe that those wrestlers adopt unhealthy diets that increased their weights, but the reality is that the sport requires the wrestlers to gain much weight and undergo intensive exercises so that they can play the game.

The Japanese do not see sumo as a mere sport. Sumo was first mentioned in one of the holy books of Shinto, called the Kojiki or Records of Ancient Matters (AD712). It is the oldest religious book in Japanese history.

According to the Kojiki, the first sumo wrestling match recorded in history was between Takemikazuchi and Takeminakata—two deities in Japanese mythology—and occurred on the Japanese archipelago.

Takemikazuchi won the first match, thus the Japanese sumo stars are said to have descended from him.

On entering sumo, the wrestlers are expected to grow their hair long to form a topknot, or chonmage, similar to the samurai hairstyles of the Edo period. Those with short hair are not allowed to practice this sacred sport.

Despite their huge bodies, the sumo wrestlers are also characterised with powerful body structures, especially since sumo requires great physical strength that enables wrestlers to push each other. Some sumo wrestlers weigh up to 200 kg.

Therefore, a sumo wrestler undergoes heavy training to strengthen his body muscles before he starts to gain weight.

The sumo game mainly depends on large bodies. This is why the role of sumo training schools spread in Japan, which help to increase the weights of wrestlers from an average 80-90 kg to more than 180 kg.

Wrestlers are not normally allowed to eat breakfast and are expected to have a form of siesta after a large lunch. A sumo wrestler has two meals a day, each containing meat, fish, vegetables, rice, juices, and sugary foods. The most common type of lunch served is the traditional sumo meal of chankonabe, which consists of a simmering stew of various fish, meat, and vegetables cooked at the table. This regimen of no breakfast and a large lunch followed by sleep is intended to help wrestlers put on a lot of weight so as to compete more effectively.

Sumo wrestlers live their whole lives in training camps. They do not have social lives outside the sumo school. They have no holidays or sick leaves. Their training sessions start at 5:00 am and end at 1:00 or 2:00 pm. In the afternoon, the junior wrestlers usually have cleaning duties or other chores. Younger wrestlers also attend classes, although their education differs from the typical curriculum of their non-sumo peers.

Despite the development of the whole world’s sports supplies, sumo has maintained its traditions. The sumo ring is still made of rice straw in a clay frame, while its surface is covered with a layer of sand. The sumo ring is called dohyo.

Sumo wrestlers have short lives because of their unhealthy dietary regimens which may cause heart attacks, clots, or other diseases. Thus, sumo wrestlers quit after a few years of fighting and begin losing weight, a process that takes at least six years to return to a normal life.

A sumo match can be won in a number of ways. First, you can push your competitor out of the ring. Second, you can grab your opponent’s belt and force them out of the ring by pushing them or throwing them. Third, you can force your opponent to the canvas. These are the three main ways and there are multiple variations of each one, although a match can be won by disqualification or if one competitor is deemed unfit to continue.

Although sumo is originally a Japanese sport, many wrestlers from outside Japan have been able, in the last few years, to achieve much in the game.

The strangest thing about sumo is that it does not attract young people at all. The average age of sumo fans is 50 years old.

Women are not allowed to play the sport or even enter the sumo ring. It is considered a violation of the sanctity and purity of sumo. In Osaka’s annual tournament, the governor of the state is usually invited to award medals to the winners. However, when the state governor was a woman, called Fusae Ohta, she was not allowed to enter the sumo ring.

Japan has six annual sumo tournaments held by the Japan Sumo Association. The official sumo season begins in January and then occurrs every other month. Three of the six sumo tournaments take place at the Ryōgoku Kokugikan sumo arena in Tokyo’s old-fashioned Ryogoku neighbourhood, with the other three held in Osaka, Nagoya, and Fukuoka.

The ranking of professional wrestlers is measured through the results of the official sumo tournaments, which each last 15 days. Japanese national television broadcasts all the tournament games live throughout the country. The sumo wrestlers compete to increase their rankings, based on which monthly salaries and special benefits are determined.

‘Osunaarashi’, the Egyptian sandstorm of Sumo