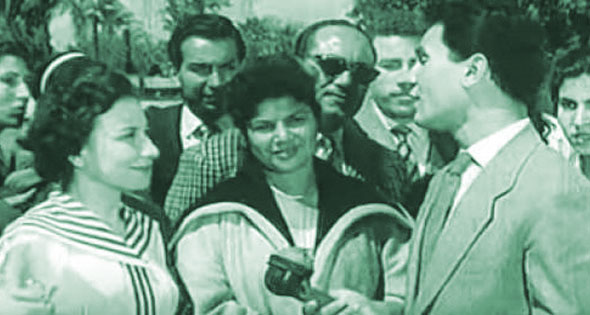 One of the pioneers of Arab radio in general, and Egyptian radio in particular, died last Sunday. Nevertheless, her distinctive voice will not be soon forgotten. She was known as the “Queen of Speech”. Her large archive led her to occupy a prominent position within Egyptian radio. Amal Fahmi was the woman behind of the famous programme “A’al Nasya” (At the Corner), which has been broadcasted for more than 50 years, making it enter the Guinness World Records.

Fahmi stopped her programme in 2014 due to her illness. Daily News Egypt dug through Fahmi’s life to find look back at when it began and how she assumed her position among radio royalty.

The beginning of Fahmi’s journey with radio

Her career in radio began when she was a child. She participated in the children’s programmes that were offered by Baba Sharou and Mama Zouzou, singing one of the most prominent songs for children, famous to this day, named “Qetaty Saghera w Esmoha Nameira” (My Cat is Small and Her Name is Nameira).

Fahmi graduated from the Faculty of Arts of Cairo University and was a student of some of Egypt’s greatest writers and thinkers, including Taha Hussein, then the dean of Arabic literature.

After graduating, she worked for a short period in journalism and won the Mustafa and Ali Amin Prize in journalism, becoming the only person from the Egyptian Radio and Television Union, known as Maspero, to receive this prize.

She received it because of her success in turning her investigative journalism into radio investigations, which impressed radio audiences.

Fahmi’s study of Arabic literature helped her much in becoming one of the pioneers of radio, due to her perfect enunciation of Arabic words and her wide vocabulary. In 1951, she passed the test of the radio station, carving out her position among the early pioneers of the Egyptian radio.

Fahmi presented her first programme, “Hawl El-Aalam” (Around the World), which provided cultural information and aspects of different countries around the world, with the aim of increasing cultural awareness among her audience.

As radio was, at that time, the only means of social communication, Fahmi preferred the type of programmes that dealt directly with listeners, that touch on the problems on the streets.

Thus, she presented another programme called ” Fi Khedmatak” (At Your Service). The programme depended on receiving citizens’ complaints and broadcasting them, trying to find solutions to these problems, then she presented another programme called “Okbal Ankom” (Wishing You Good Fortunes), then she presented the programme known as “Hatha Al-Masaa’” (This Night), which hosted a number of public figures, along with “Fengan Shay” (Cup of Tea), hosting many  political figures and leaders of Arab countries, including Ahmed Ben Bella, who was the first president of Algeria; Houari Boumédiène, Algeria’s second president; Gaafar Nimeiry, Sudan’s former president; and King Hussein, former king of Jordan.

In the mid-1950s, Fahmi was the first to include a series of daily riddles throughout the month of Ramadan, “Fawazeer Ramadan”, which aired on the radio. These riddles were written by Bayram al-Tunisi and prominent Egyptian poet Salah Jahin.

Egyptians were impressed by the programme, to the point where they were hoping to meet the lady leading the programme and record with her on the streets.

In the programme’s first year, Fahmi recorded with singing idol Abdel Halim Hafez. She also interviewed, throughout the programme’s broadcast years, many other celebrities, including Umm Kulthum and Youssef Wahbi.

Fahmi ran for many positions in media

In 1960, Fahmi won the title of Best Personality of the Year, along with then-president Gamal Abdel Nasser, according to a poll conducted by Al-Musawar magazine for the best personalities that year.

Fahmi was appointed to the presidency of Middle East Radio since its inception in 1964. She was then promoted to become the minister of information, and despite these positions, her 56 years of presenting her programme A’al Nasya did not suffer, earning her the title “Queen of Speech.”

Fahmi announced her desire to retire from broadcasting, prompting the presidency to intervene during  the interim term of Adly Mansour and Doria Sharaf El-Din’s tenure as minister of information in that period, persuading her to retreat from retirement.

She then returned to presenting her programme for a short time, then halted it due to deteriorating health conditions, entering a long fight with disease.

This long conflict ended with her death on Sunday, leaving behind her a plethora of loving listeners, speaking many memories into various generations’ ears.