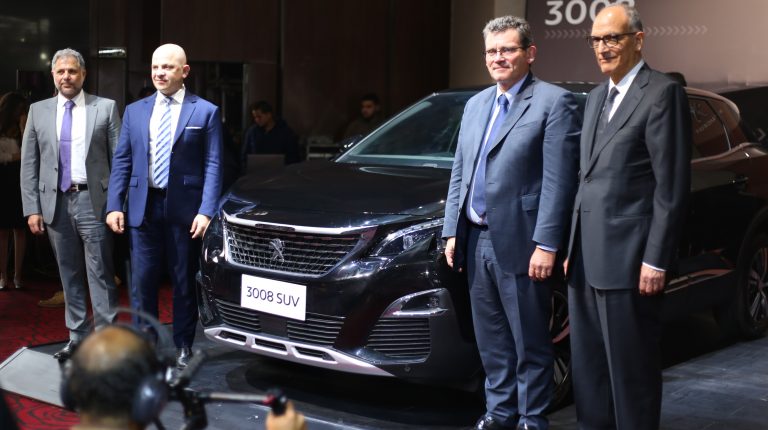 Jean-Christophe Quémard, executive vice president for Africa and the Middle East at Groupe PSA, the manufacturer of Peugeot, Opel, and Citroen participated in a conference last week organised by Al-Mansour Automotive and UAE-based Scope Investment to announce the launch of a new partnership to distribute Peugeot vehicles in Egypt.

Quémard said the company plans to invest about €20m in the spare parts sector in Egypt next year, amid expectations to increase these investments further to €100m.

Adel Khadr, CEO at Al-Mansour, said the company will release five models in the local market, including the new Peugeot 3008 and 5008 that were unveiled at the conference.

The new Peugeot 3008 and 5008, which belong to the SUV category, are available now in seven newly opened showrooms across the country.

The company aims to expand its network of showrooms and service centres by up to 11 by the end of this year, Khadr said.

For his part, Farid Al Bilbeisi, CEO at Scoop, said that Egypt has a promising market for cars, stressing that his company’s partnership with Al-Mansour is a strategic step.

“We are confident that [the partnership] will provide an important return for shareholders and benefit current and future Peugeot vehicles owners,” Al Bilbeisi said.

Samir Cherfan, Peugeot’s senior vice president for sales and marketing for the Middle East and Africa, told Daily News Egypt that former Peugeot distributor Cairo for Development and Cars Manufacturing (CDCM) was aware of the distribution contract expiration date. He noted that the French company had addressed CDCM and other companies simultaneously to provide a better offer.

“They had an amazing opportunity, but they missed it,” Cherfan said.

He stressed that Groupe PSA respects its agents and distributors even after the termination of their contracts.

According to a statement issued by the French brand, a copy of which was obtained by Daily News Egypt, Groupe PSA invited in May 2017 interested companies to bid for an open contract for the import and distribution of Peugeot cars in Egypt.

The French group received a number of offers, including an offer from CDCM, and another from the Al-Mansour-Scoop alliance. Groupe PSA said last November that they accepted Al-Mansour-Scoop’s offer after a trade-off among the presented offers.

The new Peugeot 3008 won the European Car of the Year award in 2017—one of the most important and prestigious awards in the automotive world—on the eve of the Geneva Motor Show. A jury of 58 European journalists praised its style, interior design, and performance.

The Peugeot 3008 is the first SUV in history to receive this award.

The exterior design of the car is characterised by a vertical head and a long, flat hood. It measures 4.45 metres long overall and rides on a 2675 mm wheelbase that makes it suitable for Egyptian roads.
The new car’s seats are equipped with five different massage programmes.

Peugeot says the petrol 3008 will get from standstill to 100km/h in 9.9 seconds, with the more powerful diesel version getting there a full second quicker at 8.9 seconds.

The price of Peugeot 3008 starts at EGP 540,000, while the car’s different categories have not yet been announced.

Peugeot’s new seven-seat 5008 SUV is well positioned among the large seven-seat SUVs, with a spacious interior and enhanced functionality.

The design of the car inspires a sense of strength and well-being. The car comes with a sports front bumper and grille, while the rear design features a glossy black bar and LED lights with claw effects.

The cabin gives you a real chance to travel in luxury, because it offers noise isolation and a number of comfort features for all passengers.

During the press conference, the Al-Mansour-Scoop alliance revealed the new network of Peugeot sales and service centres in Cairo and Alexandria.

The new Peugeot showrooms are located at Al-Mansour Showroom in Heliopolis, Al Ghalban on Merghany Street, Elgeoushy Motors on 90th Street, Ashraf Tawfiq in Maadi, Masters in Nasr City, and Motor City in Al-Nozha, in addition to five ElSabaa Autoservice centres in Maadi. Outside Cairo, there are the Saudi Centre on the Cairo-Ismailia Road, Al-Wahdan in Sixth of October, Nour El-Din El Sherif on Amiriya-Alexandria Road, and Abaza in Hurghada.

Al-Mansour affirmed that all the new Peugeot models are available in its showrooms starting from the day of the conference.