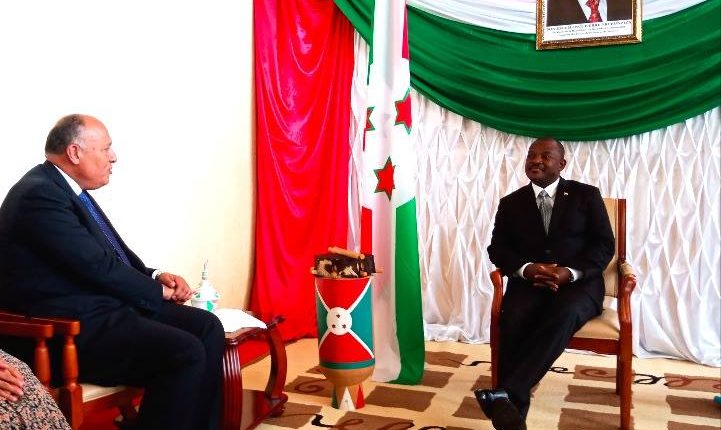 Egypt’s Minister of Foreign Affairs Sameh Shoukry discussed several issues of mutual interest with Pierre Nkurunziza, the president of Burundi, Wednesday, during Shoukry’s visit to Bujumbura, where he delivered a message from President Abdel Fattah Al-Sisi to Nkurunziza.

According to a statement from Foreign Ministry spokesperson Ahmed Abou Zaid, the message addressed bilateral cooperation between the two countries and several issues of mutual interest.

The Egyptian minister also discussed bilateral relations between Egypt and Burundi with his Burundian counterpart Alain Aimé Nyamitwe on Tuesday, said Abou Zaid in a statement.

During the meeting, Shoukry expressed Egypt’s keenness in boosting relations with Burundi in all fields. He also reviewed the role of the Egyptian Agency of Partnership for Development, affiliated with the Egyptian Foreign Ministry, in providing scholarships and trainings for African countries.

According to the statement, the agency participated in building capabilities and transferring experience to 150 trainees from Burundi in 2017. It also funded a dialysis centre in Bujumbura, in addition to an Egyptian hospital in the capital city.

Nyamitwe praised the Egyptian role in keeping security and stability in Burundi during its period of political instability. He announced his country’s support for Egypt and its understanding for the Egyptian stance regarding Nile river water.

He also expressed hope for reaching an agreement between the Nile River Basin countries in line with the mutual interests of these countries. For his part, Shoukry briefed his Burundian counterpart on the latest updates of the issue, saying that Egypt does not want to hinder constructing the Grand Ethiopian Renaissance Dam (GERD), as it knows that it will achieve development for Ethiopia. He explained that Egypt needs only to ensure that the GERD will not harm its share of Nile water.

Abou Zaid said that the meeting between the two ministers addressed several regional issues, including in Somalia, South Sudan, Central Africa, and the Democratic Republic of the Congo, as well as countering terrorism efforts.