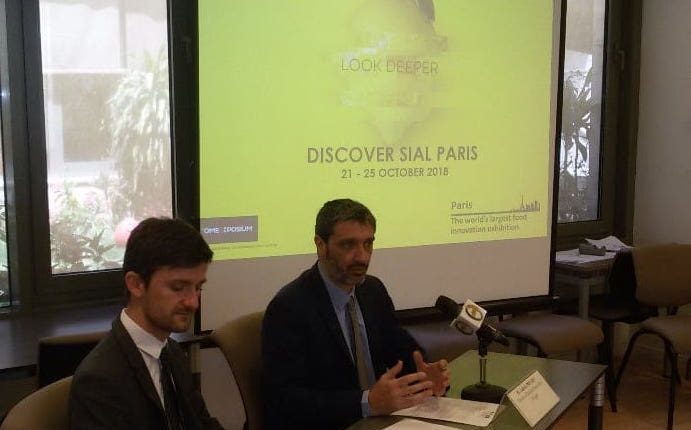 Almost 90% of the SIAL Paris food exhibition’s floor space has already been reserved and more than 80 countries have already confirmed their attendance, according to Ludovic Prévost, director of Business France in Egypt.

Prévost said that during the five days of the event, exhibitors will have the opportunity to present their products to more than 160,000 professional visitors from all around the world. Depending on their preferences, their expectations, and their needs, visitors will be able to explore the exhibition by sector or world regions.

“During the last edition, more than 700 Egyptian visitors attended SIAL Paris, of which 90% were decision-makers and about 109 were exhibitors, constituting 1% of all exhibitors,” Prévost noted. “Trade relations between France and Egypt are close.

Commercial exchanges between France and Egypt reached €2.5bn in 2017. France is Egypt’s sixth [largest] supplier and seventh client”. For his part, Baptiste Dumas, agri-food department manager at Business France in Egypt, said, “in 2018, two good ideas made their reappearance.

First, beverages will again be under the spotlight. And, because SIAL Paris is such an excellent showcase for the French food processing industry, products made in France will be assembled and promoted under the same banner.

What is more, the equipment and services zone will be back once again to allow microenterprises and SMEs to present their technologies and equipment.” Dumas noted that new in 2018, the alternative food sector will welcome many exhibitors from the alternative food market, renowned experts on healthy eating, and the stars of innovation in this field, whatever their country of origin. “It is a unique potpourri of experiences that we will be proposing for the first time in 2018,” explained an enthusiastic Nicolas Trentesaux, director of the SIAL network.

“SIAL has always been at the vanguard in food matters, and this year we wish to go even further with this alternative food sector, organised against the backdrop of SIAL, the world’s leading food innovation exhibition.”

SIAL Paris is a global event which involves food companies from all over the world. The upcoming edition of SIAL Paris will take place from 21 to 25 October 2018 at Paris Nord Villepinte. Its eight regular exhibitions (SIAL Paris, SIAL Canada in Montreal and Toronto, SIAL China, SIAL Middle East, SIAL Interfood in Jakarta, and FOOD India Inspired by SIAL, in New Delhi) bring together 14,535 exhibitors and 359,800 visitors from 194 countries.