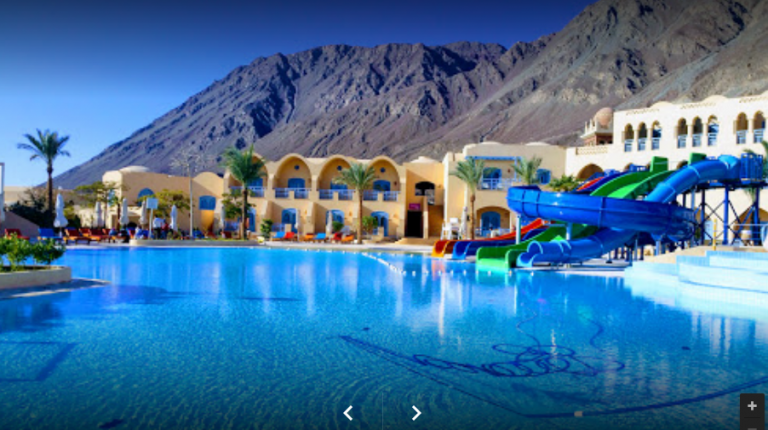 Taba is a small, Egyptian border town with mountains encircling its tourist resorts and its coastal strip near the northern tip of the Gulf of Aqaba, the northernmost resort of Egypt’s Red Sea Riviera, and Egypt’s busiest border crossing with neighbouring countries, despite it consisting of little more than a bus depot and a luxury hotel (complete with casino). It is a frequent vacation spot for tourists, from Egypt and abroad, especially those from Jordan, Saudi Arabia, Palestine, and increasingly from the Egyptian market, as a weekend getaway or on their way to other destinations in Egypt.

Orascom Development Egypt (OD), the owner of Taba Heights, is interested in reviving tourism in Sinai—for its unique landscape—and overcoming the low tourist turnout that has recently been witnessed due to the current instability, according to Emad El Trabishy, senior owner representative of Taba Heights Resort.

El Trabishy added that the area of Taba began to recover as of late as a result of the propaganda and marketing parties and concerts that Taba Heights has held recently.

El Trabishy told Daily News Egypt that some events occurred in Egypt after the revolution of 25 January 2011, which affected the tourism sector in Egypt and the occupancy in the whole Sinai region, with occupancy rates sometimes reaching as low as 25% or even lower.

This led the management of Taba Heights—a fully self-sufficient resort town—to launch promotional parties to attract tourists, especially Arabs. The company also seeks to attract tourists from European countries through a number of promotional activities, including exhibitions outside Egypt and holding concerts headlined by international celebrities.

Taba Heights held a series of trips starting in January last year to activate tourism, and Taba Heights continues to hold other celebrations to attract tourists to the region, which is suffering from a lack of promotional activities by the concerned state agencies, even though it is one of the best tourist locations within Egypt’s borders.

El Trabishy noted that the minimum occupancy during concerts is 90% and sometimes the rooms are fully booked, especially during the last concert which was held at the beginning of the current month, when the occupancy exceeded 100% due to the great demand by guests, especially Arabs who came to attend the concert of Syrian singing icon George Wassouf.

“The company has inaugurated The Bayview Taba Heights Resort and installed an aqua park in El Wekala Resort. The aqua park was developed by E.MAK Swimming Pool Centre,” he elaborated.

The company is working to develop different categories of hotels within the resort to suit all segments of guests. Orascom is seeking to attract a number of guests, as Taba Heights was dependent on the English, French, Germans, Italians and a number of Russian tourists with high spending ability. Nevertheless, Egyptian tourists began to visit resorts in Taba during the past year.

“We are focusing on attracting other tourist nationalities, including Lithuanians. Therefore, Taba Heights holds concerts annually for famous singers of the Arab world, which raised the occupancy of hotels,” said El Trabishy. “The company is seeking to use the shipping line between Hurghada and Sharm El-Sheikh to revive the Taba area during the coming period.”

Mohamed Abdel Wahab, mayor of the city of Taba, said that the city is witnessing a state of tourism boom during the celebrations of Sham Ennessim.

Abdel Wahhab said that the percentage of tourist occupancy in hotels and tourist resorts exceeded 75% as the influx of large numbers of tourists from different nationalities, including Russians and Brits, in addition to Jordanians, Lebanese, and others.

He pointed out that all tourists are keen to enjoy the sea water and the scenic landscape of the city, in addition to visiting the most important touristic sites.

Taba hotel prices less than half of Sharm El-Sheikh, Hurghada

A tourist of the Arabs of 48 said, “hotel prices in Taba are approximately 50% cheaper than other destinations. Besides, the place is very close to us. Moreover, holding concerts and parties is the main purpose of going on holiday in Taba.”

For his part, El Trabishy commented that the concerned agencies have to set a minimum price for hotel rooms in South Sinai to fight the practice of pricing below market value. Some camps in South Sinai sell at prices higher than many hotels located in the governorate.

“Taba’s atmosphere is perfect, especially in the summer, and we love to come to attend parties and concerts at Taba Heights resorts, especially since the prices of rooms are suitable for spending the weekend,” a Jordanian tourist told Daily News Egypt.

A European tourist said, “Taba is one of the best resorts in Egypt to enjoy the sun, sea, and colourful fish close up. Moreover, the mountains shine under the sun, and the sky is clear at night, filled with stars.”

“Its borderline between the mountains gives it a special charm,” said an Egyptian tourist visiting Taba for the first time.

Another Egyptian tourist noted that the direct road to Taba from Cairo saves time, and through it, guests can take only six hours from the capital, which is considered closer than Sharm El-Sheikh.

“I feel a new feeling different than other places in Sinai. However, we need more entertainment areas for children to have more fun,” the tourist added.

Famous Arab singers express their pleasure to be in Taba

The Taba Heights Spring Nights 2018 has proven its success and its ability to attract the top stars of the Arab world after having generated confidence in all the equipment and supplies provided by Star System Company for sound and lighting equipment, which is owned by Hany Hassan, who oversees all the preparations for the stage and equipment. Last year, Sherine Abdel Wahab, Wael Jassar, Fares Karam, Maeen Sharif, and other singers had performed concerts in Taba Heights. George Wassouf, Najwa Karam, and Melhem Zein have performed concerts this year.

After an absence for years, Wassouf returned to perform a concert in Taba in the attendance of thousands of his fans.

Wassouf told Daily News Egypt, “I adore Egypt and Egyptians and I can feel their love for me. I love their shouts when they say ‘Abou Wadea ya amohom,’” Wassouf said. “I sang in Egypt, the country of dignity, a country where I always cherish singing. I hope to visit Taba again and sing in it because I enjoyed singing with those masses who came from different Arab countries and cities and made me happy.”

He further noted that Taba is an Egyptian and Arab land and has a special place in his heart and is always happy singing in Egypt.

Taba: A place of great history

Archaeologist Abdel Rahim Rayhan, the general manager of research, archaeological studies, and scientific publishing in the Sinai Peninsula, explained that all tourism components will be highlighted in Taba, including archaeological tourism to visit the citadel of Saladin, on Pharaoh’s Island, as it is an important historical and cultural value established by the leader Salah ad-Din al-Ayyubi in AH567 (AD1171) to repel Crusader raids and protect the Egyptian pilgrimage route through the Sinai Peninsula, and had a great role in protecting Sinai from the Crusader invasion when it was besieged by Renaud of Châtillons.

Taba enjoys safari tourism and mountain climbing, including the picturesque Tobya Valley and mountains surrounding Pharaoh’s Island, highlighting the tourist attractions of Taba. In addition, recreational and environmental tourism is available to enjoy a cruise around Pharaoh’s Island, Fjord Bay, which is 10 km away from Taba. A famous Egyptian film was also shot in that region, as is the world-renowned diving resort of Taba Heights. The Taba Port can also be opened to tourism to see the “91 mark” that tells the story of Taba’s return to Egyptian sovereignty.