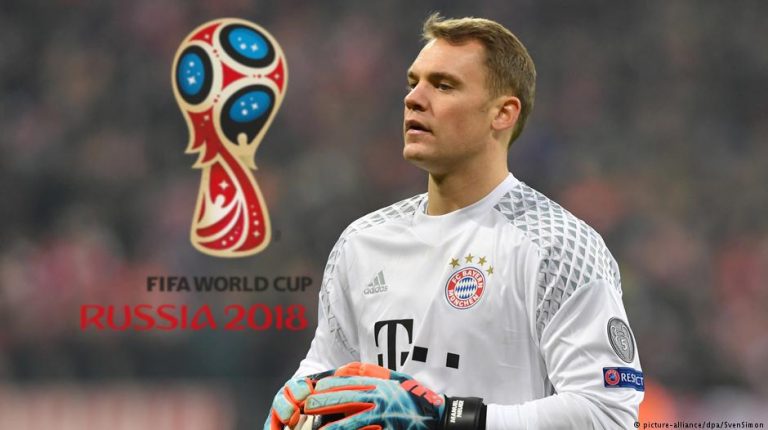 Manuel Neuer returned to full training with Bayern Munich on Friday after seven months out. But with the World Cup less than two months away, and deputy Sven Ulreich in fine form, he faces a race against time.The good news just keeps on coming for Bayern Munich, with Neuer’s return the latest boost in a week that’s seen them appoint a new coach and reach the German Cup final.

The 32-year-old hasn’t featured for Bayern since September 16 after fracturing a metatarsal but the club announced on Friday that: “After three weeks of just goalkeeper-specific sessions, Manuel Neuer finally returned to team training with his colleagues on Friday.”

But departing coach Jupp Heynckes said any talk of an imminent return to first team action would be premature and that Sven Ulreich, who has impressed between the sticks in Neuer’s absence, will keep his place against Hannover on Saturday and in the first leg of the Champions League clash with Real Madrid.

Read more: The race to be Manuel Neuer’s understudy

“The discussion is coming too early,” Heynckes said. “I know what I will do. I have a plan.”

Exactly how that plan plays out is not clear. After that meeting with Real in Munich, Bayern will have a maximum of five games remaining, while Germany have two pre-World Cup friendlies lined up in early June.

As well as Ulreich’s performances, his World Cup ambitions make this situation trickier than it might be for Heynckes. After a shaky performance from Kevin Trapp in Germany’s loss to Brazil and with Bernd Leno yet to fully convince Joachim Löw, the third keeper spot – behind Neuer and Marc-Andre ter Stegen – is very much up for grabs.

“The World Cup is the biggest thing there is,” Ulreich said recently. “Of course that’s also a goal of mine. But if it doesn’t happen, I won’t be sad.”

After a shaky start under Carlo Ancelotti, Ulreich has become a firm favorite with fans, Heynckes and his defensive colleagues. “He’s been really solid behind the defence for months,” said Mats Hummels. “He exudes calmness and saves everything that comes his way – and sometimes more.”

The same could be said of Neuer, who has been a fixture in the Germany goal for almost a decade. The former Schalke stopper has also been unstinting in his praise for his replacement and appears relaxed about his own return.

“My aim is to play a few games again for Bayern, but the important thing is nobody is putting me under any pressure,” Neuer told his club’s website at the end of last month. “They’re giving me all the time in the world, albeit hoping to see me back on the field again soon. Getting back into the national team with a few games under my belt is my objective.”

Neuer’s caliber and vast experience mean he remains as close to an automatic selection as it gets, but even he will need games before Germany kick off their World Cup defense against Mexico on June 17.

With Bayern’s remaining league games largely meaningless to them, opportunities to regain sharpness will surely arise. But Ulreich might take some getting past in the cup competitions. The pair could be seeing even more of each other over the next few months.