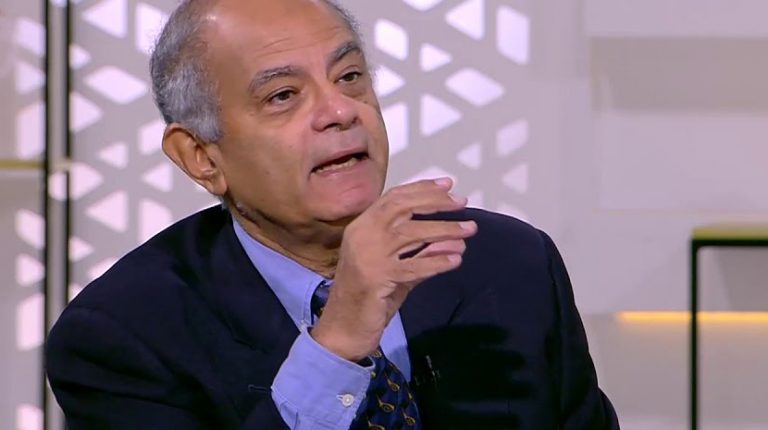 Spanning three continents and two cultures, as well as two disciplines, the work of Swiss-Egyptian artist Karim Noureldin is increasingly receiving the attention it deserves.

This year the Swiss private banking group Julius Baer asked him to work on a site-specific installation. With offices in 20 countries, the group decided to unveil the work for the first time at Art Dubai. Noureldin sat down with Daily News Egypt for an interview in which he opened up about his ties to the Middle East and his work with Julius Baer.

“It was a very generous commission and an exceptional opportunity. The work is everything I wanted it to be,” he said.

The commission involved the development of two large textile installations, both produced in India. Textiles have increasingly become part of the artist’s repertoire but, at the focus is his interest in elaborate, geometrically abstract designs. The two wall-sized installations can be loosely compared to tapestries but were sewn by a family in India. Given that common decorative themes can be found between the Middle East, India, and even traditional European art, it was a solid choice.

The work took over six months to complete and started with careful pen sketches and then a trip to India to meet with the families and workers.

“I have become friends with these people when I visit them,” the artist said with a smile when discussing his relationship with his art labourers, adding that ensuring they worked under ethical standards was an important part of his directorship of the project.

The did not only include a commission, it allowed him to travel to India to develop his work and the Middle East. Noureldin said his work draws on the inspiration of Islamic art in the region.

The son of a middle-class Egyptian engineer who completed his doctorate in that field in Zurich, Switzerland, while completing his studies, the elder Noureldin met and eventually married a Swiss woman. The father frequently took the young Noureldin to Egypt each year where he was fascinated with the lure of the pyramids of Giza and Egyptian gastronomy.

“I never learned fluent Arabic, but Egypt is in my DNA,” he said. “I’m always cold, and I have a family now, but my wife and I still talk about moving somewhere warm,” he said. He leaves the thought to linger in the air as he reflects on a move to the Middle East.

Upon each visit to Cairo as a child, his first contact with Egyptian culture would be the police officers at Cairo International Airport.

“Masri? Masri?” they would ask Karim Noureldin. It was the Nasser era, and the state was eager to find conscripts for the army, but Noureldin never held Egyptian citizenship. In fact, over concerns he would be obligated to serve in one of Egypt’s wars with Israel—a real concern given that the artist was born in 1967—the October 1973 war and its aftermath briefly stopped the family’s trips to Cairo.

He soon found his passion in the art world and studied visual art at various institutions in Switzerland. He has described his artistic career as a research journey, and that journey has taken him around the world, and he sojourned in the art hubs of London and New York, as well as Rome. Pencil and paper remain his primary interests, but the artist has expanded to include textiles, site-specific installations, sculpture works, and photos. However, his work remains loyal to its use of bright colours and geometric designs. As such, his work has influenced a group of younger Swiss avantgarde architects.

Ten years ago, however, he returned to Cairo not as a visitor to his family or as a tourist, but as an artist in residence. This time there was no father to translate the questions of the airport police. His apartment overlooked a Misr petrol station, the iconic logo of which featured the pyramids which so fascinated him as a child. While in Cairo, he deeply studied the country’s social and political history, looking for inspiration.

His sojourn in Egypt produced a book which looked at Cairo through an unusual lens. Cairo’s businesses invariably have roll-down storefront gates. Painters are hired to give these gates some colour and work at night when the shops are closed. More often than not, simplistic geometric designs, stripped lines in bright colours, and in other places triangles, were used. Images of these Cairo doors were compiled in a book by the author with the title “MISR”. The book also includes images of cars on Cairo’s streets wrapped in dust covers. The photos were taken in a way that even this seemingly every-day action appears as found-art. But, not in the manner of Marcel Duchamp, but as a geometric and artistic abstraction. The book can be read in English or be flipped over and read in Arabic.

“I work in the abstract [and geometric designs], so there is an inspiration in my work in Arabic and Islamic art for which I have an affinity. I am culturally a European, but I am comfortable in any large city in the world.”

Today, he lives in Lausanne, where he works as a professor at the University of Art and Design. In this role, he is again bridging two worlds, the artistic and the academic.

“Some companies collect art, but Julius Baer might be one of the best at collecting in the corporate world. There is a family feel in their behaviour and philosophy in their collecting,”

Noureldin is also a family man; his wife is French and he has children. His study is in Lausanne, his gallery is in Basel, and he works with three different dealers. He credits Switzerland’s small size—each city is only a train-ride away—for his ability to work across the country.

“Of course I would be open to doing more work in the Middle East as an artist,” the artist said with a grin. “I would be thrilled if there were more opportunities. Right now, I am very busy back in Switzerland.”

All EU ID cards to include fingerprints – EU commissioner