Using the internet in Egypt does not come without difficulties. Whether surfing the web or publishing content, users could find themselves unable to access hundreds of websites and what they put out could be the subject of legal penalties.

Like elsewhere in the world, users are also often exposed to fake news and unauthentic graphics and could be at risk of digital security harm and scams.

In recent years, the Egyptian government has sought to gain more control over internet-published content, on grounds of protecting national security and countering incitement to violence. State bodies have also been closely monitoring social media content related to news and information on the country’s affairs and making sure to deny circulating rumours.

Last May, the government blocked nearly 20 websites as officials claimed they were fuelling terrorism. They included news websites which the government has considered hostile to Egypt, such as Al-Jazeera and other Muslim Brotherhood-affiliated websites. 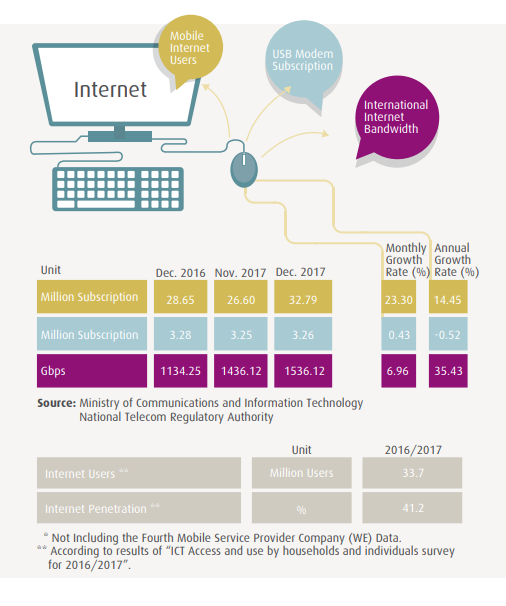 In the following months, the campaign extended to more websites among which were many local news websites, specialised online platforms (on arts, women, sports, etc), and foreign websites as well. The critical content of some websites had already been the subject of denunciation by the government and pro-state media campaigns which established that those websites were working on an agenda against the country and its people.

According to data from the Ministry of Communications and Information Technology, there are nearly 33 million internet users in Egypt as of 2017, a 41% internet penetration.

The internet served as an important tool during the 2011 revolution, starting with a bloggers’ movement all the way to social media websites which were used to spread calls for protests.

The former Mubarak regime had realised its significance within two days of the mass demonstrations that broke out across the country and resorted to cutting access to the web in a move that was publicly decried and became the subject of investigations.

As the revolution went on, social media platforms turned into vehicles for political debate. Facebook and Twitter were also widely used to expose security forces’ alleged violence against protesters, spread the word about detainees, and bringing together the community of political activists.

Online political campaigns continued in the following years, but divisions and polarisation were also increasing, and so was unverified information.

In this chaotic scene, the government is trying to implement a cybercrime law that would include penalties that may reach imprisonment. The law seems to have obtained parliamentary approval, amid fears on limitations on liberties.

But member of parliament have defended the necessity of the law in fighting internet piracy, protecting information, and preventing abuses of technology, denying that it would restrict personal freedoms and saying that, on the contrary, it would safeguard users’ privacy. Controlling and monitoring social media use

With the growing influence of social media on which people are increasingly relying for information, the government has started to pay attention to what is being posted on those platforms.

The Egyptian Ministry of Interior is one body that is actively monitoring social media pages and has announced over the years the shutdown of hundreds of pages reportedly inciting violence.

For example, the militant group Hasm had been using Facebook and Twitter to post statements about killing operations against police personnel. However, other pages might have also been targeted by the ministry in spite of their non-violent content. There were several reports on arrests made of individuals who administered social media pages allegedly inciting violence, according to the ministry.

Moreover, authorities encouraged citizens to report what they believed was misleading or false information.

The ministry is not the only monitoring entity. Within growing restrictions on the public sphere, pro-state actors have also played the role of monitoring and reporting social media content, especially if posted by political or human rights activists and political opponents.

This content was often used by such media to conduct smear campaigns against those persons, including on some occasions the use of private information for the same purpose.

In a more progressive approach, some government institutions have been following up on news circulated on social media and then issuing statements to clarify their authenticity.

While the world is witnessing one of the most powerful scandals related to Facebook’s exploitation of users’ data, the topic is not viewed as a priority in Egypt.

The issue recently came up during debates on a new law that would regulate the operations of ride-hailing applications such as Uber and Careem, where both companies reportedly objected to articles that would require them to provide state authorities with complete access to their databases.

In the new cybercrimes law, there are penalties that would apply against companies, state, or private entities misusing the data of internet users or breaching their data privacy.

According to the local Al-Youm Al-Sabea website, article 26 of the law stipulates a prison sentence of at least six months and/or a fine ranging between EGP 50,000 and EGP 100,000 in the case of violating privacy and users’ data for promotion purposes without their consent.

In fact, foreign reports said the Egyptian government had purchased different programmes aimed at surveillance from Western countries. A recent research by Citizen Lab suggested the government was doing more than that: using internet users to mine cryptocurrency.