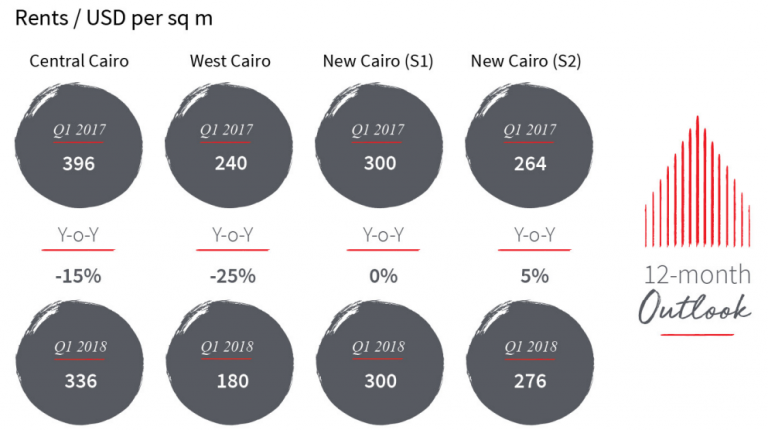 The residential market has experienced strong price increases over the past year, which resulted in a number of new projects being launched during the first quarter (Q1) of 2018, according to Jones Lang LaSalle’s report Cairo Real Estate Market Q1 2018.

The report said that these new projects include City Edge Developments’ Etapa and most of the new launches have been to the east of Cairo between New Cairo and the New Administrative Capital. Further, Al Marasem Development recently announced its second residential project, Capital Gate, over 407,000 sqm in New Cairo.

Regarding supply, the report noted that around 2,000 units were completed during, Q1 bringing the community supply to around 138,000.

A further 13,000 units are expected to enter the market over the remainder of the year, according to the report.

The report pointed out that Q1 2018 witnessed a significant number of project announcements, mainly located in east Cairo, with these projects expected to contribute to new supply over the next three to four years.

It also explained that there was less activity in the city of Sixth of October with just minor deliveries recorded across previously announced projects.

“Prices continued to increase across all sectors of the residential market in Q1 but at lower levels to reach 2-7%, compared to the hikes recorded in the second half of 2017. The increase in competition and the success of new market entries priced at competitive levels has contributed to the slowing in price growth compared to previous levels,” the report elaborated. “Developers are responding to the increased competition by reducing the unit sizing and offering more flexible payment terms to attract buyers.”

The report added that the rental market has continued to decline, with further falls in rental levels between 1% and 7% in Q1. There remains some temporary demand from purchasers awaiting the delivery of off-plan units.

JLL said that the retail sector was the most negatively impacted by the currency devaluation and other economic reforms over the past two years, with an average decline of 45% in rents in US dollar terms being recorded during 2017. This situation has now stabilised and some of these declines are being recouped, with rentals increasing by 10% in US dollar terms in Q1 2018. There remain opportunities for retailers to expand their footprint and for developers to physically reshape their malls in line with emerging consumer trends.

The report added that retail supply remained at around 1.5m of gross leasing area (GLA) with no significant additions entering the market during Q1. There remains one project expected to enter the market before the end of 2018.

“Retail sales across Egypt continue to increase and the total retail sales reached $79.5bn in 2017, with the figure forecast to increase by around 17% to reach $95.3bn during 2018. Retail rents experienced a sharp drop in 2017 due to the EGP devaluation. However, rents are now stabilising as developers have adapted the new market conditions, which contributed to an increase of 10% in average rent for shops within super regional malls in Q1 2018,” the report elaborated. “Sector vacancy increased by approximately 2% y-o-y, reaching 12% in Q1 compared to 10% in Q1 2017, and is expected to increase with new market additions.”

The office sector has experienced relatively stable performance over Q1, with demand mainly geared towards consolidation within fully integrated office parks, which has resulted in the announcement of a number of new business districts across the country. While rents have increased in New Cairo in Q1, rents in the Central Business District and west Cairo have remained unchanged. Office rentals are expected to pick up further in the medium term due to the continued improvement in business sentiment.

Regarding office supply, the report noted that there were no completions recorded during Q1 with the total office stock remaining at 986,00 sqm of GLA. There is an additional 68,000 sqm expected to be added by the end of 2018, with most of this space within Cairo Festival City. New Cairo remains the preferred location for additional office supply, with a number of new projects being launched recently in response to strong demand. Supply in west Cairo remains stable with no new project announcements and no completions scheduled for 2018.

The report pointed out that New Cairo continues to experience rental growth between 11% and 16% over Q1 due to strong demand for spaces in that area due to its proximity to Cairo International Airport and the New Administrative Capital.

“Vacancies in the office sector remained stable at 18% over Q1 but are expected to increase over the course of the year due to the new market additions,” the report pointed out.