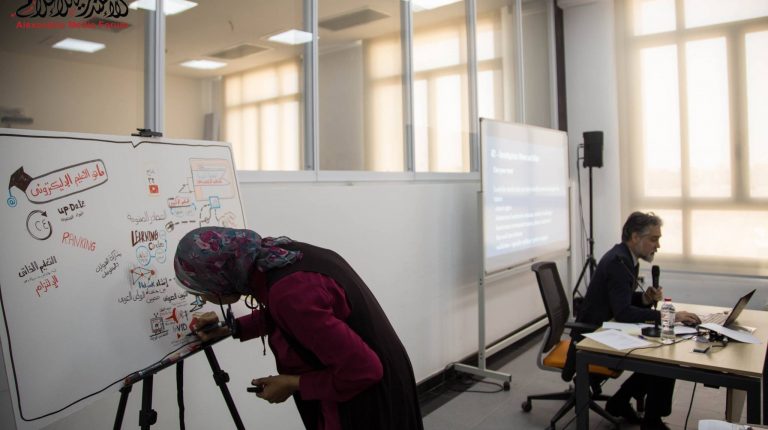 “Ancient Egyptians started engraving on walls thousands of years ago to produce a visual brief about something; this is what we do,” said Maiy El-wakeel, a teaching assistant at the Faculty of Arts in Alexandria University. Five artists who all graduated from the same faculty knocked on the door of an unpopular business in the country called “graphic recording.”

In November 2015, El-Wakeel, Hany Mansy, Dina Elsayed Saleh, Alaa Ebied, and Nermeen A Elreheem launched a project named “Wasalet” for graphic facilitation. Only three of them participated in the Alexandria Media Forum, which was held from 15-17 April at the Egypt-Japan University of Science and Technology, as graphic facilitators. They attended all sessions of the forum to “facilitate the process of delivering information given by speakers to attendees.”

“We work to connect people,” said El-wakeel, illustrating at a session on news verification and search engine tools. “Our main mission is to ‘record’ what we hear and see, then turn it into a clear brief,” adding that they “facilitate the process of delivering information to people,” adding that they produce an effective way of communication between speakers and attendees.”

During the three days of the forum, the three graphic facilitators worked for entire days, sometimes standing or sitting in a chair next to the speakers, to do their job.

“Graphic facilitation is very common across the world. We first learned about it when we were trained by the Value Web,” she said, adding, “the Value Web is an international network of artists, designers, facilitators, educators, researchers, technologists, writers, social activists, and entrepreneurs who work to use design and facilitation to tackle the most pressing challenges in our time.”

According to El-wekeel, 14 Egyptian participants joined the workshop that the network conducted for a week in Egypt in 2015 while it was organising a conference, noting that only five of them launched Wasalet. “The network was in need of Arab graphic recorders. When they did not find anyone, they decided to train some people to assist them in the conference they organised,” explained El-wekeel.

However, when the five young people started their own business, they faced difficulties in a field that does not recognise or understand what they are doing. “Most organisations we worked for were not Egyptian. We tried to communicate with local bodies, but we were unwelcomed, as they do not acknowledge the importance of what we do,” said El-wekeel.

However, they received great attention while working at the Alexandria Media Forum, as most speakers and participants were aware of what they do and took photos of boards full of creative symbols and caricatures. Meanwhile, the forum announced that they rewarded Wasalet’s members by issuing a handbook consisting of all their works during the sessions. That kind of appreciation, according to El-wakeel, is very supporting and encouraging to the path they chose three years ago.

She noted that their project is self-funded, with almost no profits thus far. “The reason is that institutions still do not consider our work as a significant part of any conference, meeting, or workshop,” said El-wekeel.

Meanwhile, Hany Mansy, a jewellery designer, member of the project, and also El-wekeel’s husband, said that the job is not just for artists, but of course, having painting and illustration skills is a great advantage.

Talking about the circumstances of working in Egypt, he said, “unfortunately, conferences just happen in Egypt via the same traditional organising way and offer little chance for other creative assistances such as graphics facilitation,” noted Mansy.

He added that they have to pay for the expenses of all materials they use, as they sometimes participate as volunteers for the chance to let people acknowledge what they do. “We have to focus on every word said at a conference and stand the whole day, as our work requires major physical and mental effort,” he said.

Furthermore, he added that sometimes they receive offers they do not feel comfortable with. “They bring us only for the purposes of innovation, but actually, we offer an important kind of work, which has to be respected,” Mansy said, adding, “we are not coming to amuse audiences. Organisers should treat graphic facilitators as they deal with speakers.”