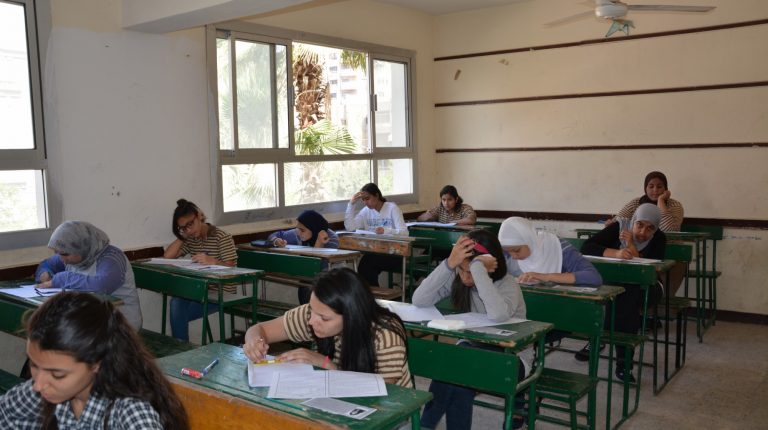 For years, “thanaweya amma” (secondary school) has been a nightmare for Egyptian students, stirring among them fears and doubts of not reaching their goals, as in many cases, the final total of their grades was the main reason that hindered some students from entering the faculty of their dreams. Parents spend large amounts of money on private tutoring, as well as school tuition fees. Students depend on private lessons more than school classes during the thanaweya amma stage to learn the subjects they will be tested on.

Thanaweya amma is Egypt’s secondary school certificate, required to apply to universities and higher education institutes. The system in Egypt is very complicated, as students are required to study a number of subjects, in which grades of each subject are combined to come up with the total that will determine which faculty he or she can apply for.

“Throughout the year, I spend too much money on private classes, I do all my best to offer a good atmosphere of studying for my daughter. Still, I cannot guarantee that she will really succeed with high grades, to enrol in her dream university in the specialisation she wishes to study and work in, no matter how hard she studies, as always, final exams of thanaweya amma are an obstacle,” said Amal Thabet, a mother of a thanaweya amma student completing the science specialisation.

Students often dream of top notch faculties that always require the highest grades. In Egypt, thousands of youth have not been able to study in their most desired faculties because they failed to reach certain grades to study in one of the country’s three prominent universities, Cairo, Helwan, and Ain Shams. In some cases, parents send their sons to private universities where they can study their dream specialisation, but in the trade-off is large sums of money.

Students never get the chance to see how their tests were graded, but instead, get a report about whether their exams were graded fairly, as well as the option to receive a regrading.

Educational experts have always criticised the syllabi of the subjects of thanaweya amma, asserting that they are not of interest to students and that they are not well-trained to study such subjects. In addition to that, they further complained of the difficulty of exams that always include tricks not suitable for the learning levels of students.

The secondary level is three years long. During the first year, students study subjects of both specialisations available in the system. For the last two years, students study only the subjects of the specialisation they choose. In the Egyptian thanaweya amma, students will choose either the scientific or literary route, to the contrary of other countries, where there are other specialisations, such as nursing, information systems. and industrial as well as human and social studies.

Recently, the Ministry of Education changed the system to calculate the final grade based on the final year, though students must now study extra subjects. The new system was introduced after decades of combining the last two years as the final grade.

In 2017, Egypt’s Education Minister Tarek Shawky announced that a new system will replace the traditional thanaweya amma system in the academic year 2018-19. The new system will cancel the scoring system of calculating total grades to switch to a grade point average (GPA).

The new system is scheduled to be implemented at the beginning of the new academic year, next September, to all students, except those at international schools. Students will have 12 exams in each subject throughout a year of study, of which the scores of the highest six exams in each subject will be taken into account.

The minister said that students will take the electronic tests instead of paper ones to improve the system and student evaluation. Exams will not be unified for all students, though details are not yet clear how they will differ. He also said that the tests will be administered similarly to the English proficiency Test of English as a Foreign Language (TOEFL) exams, adding that secondary schools will be sent the examinations shortly before test dates to avoid leaks of exam questions. The past few years witnessed leaks of thanaweya amma final exams through pages on social media, which forced the ministry, on several occasions, to change the exams.

The Ministry of Education plans to provide all secondary school students and teachers with tablets. All of those will be free of charge, and high-speed wifi services will be provided in schools. Students will have books, in addition to the tablets as additional references.

Parliamentarians have expressed concerns regarding the new system proposed by the minister. Columnist Ashraf El-Barbary said in an op-ed in privately-owned Al-Shorouk newspaper that still the minister needs to present a clear strategy as to how the new system will be implemented in public schools, particularly in remote, rural areas that lack basic facilities and services.

Member of parliament’s committee for education and scientific research Mostafa Kamal said that the new system has many “negatives,” adding that parliament will hold community dialogue sessions on the new system. Kamal suggested that to change the system, it is necessary to amend the country’s law on secondary education and to discuss proposed articles. He said the changes will likely be challenged in parliament, and then approved, which will take long time.

The members of the committee have different concerns regarding the new system. Parliament is still waiting for the Ministry of Education to send it the plan to hold discussions and community dialogues with educational experts.

Gamal Sheha, head of the committee, asserted that the secondary school system will only change by amending the law, and that he is not supporting the system, but is still waiting to hear discussions of experts and the minister, as he feels that the new system “may turn thanaweya amma into a trade and increase private lessons.”

Egypt will sign a deal with the World Bank for $500m to fund the government’s plan for the system, to support increasing access to quality kindergarten education, improve the quality of learning, and adopt technology as a vehicle to achieve reform objectives. Egyptian President Abdel-Fattah El-Sisi ordered all tablets used in exams to be manufactured in Egypt, in cooperation with the Ministries of Military Production and Communication and Information Technology.