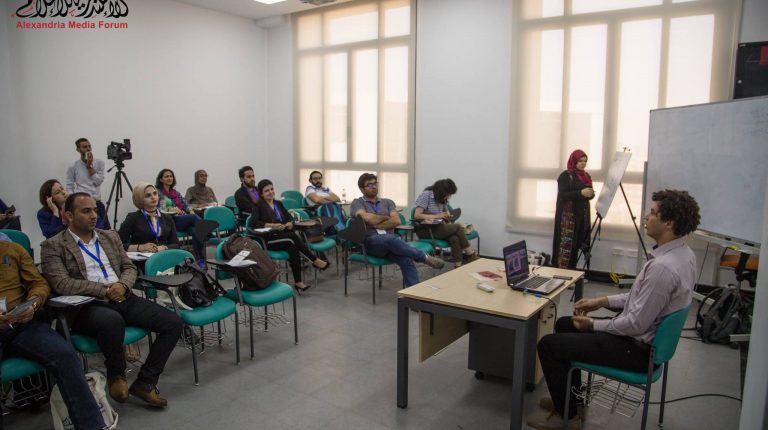 As Middle Eastern countries have weathered civil wars, conflicts, and political instability, every news story has had two, if not more, narratives. On what is true or fake, Lebanon, Jordan, Egypt, and Iraq launched projects and initiatives over the past years to counter fake and fabricated news, run by journalists, bloggers, and volunteers.  At Alexandria Media Forum, held from 15-17 April 2018 at Egypt-Japan University of Science and Technology in Borg El-Arab, Alexandria, all the projects’ representatives provided more details about their work.

“We are not journalists,” noted Mohamed Hassanein, of “Da Begad” (Is It True?), an Egyptian initiative run by seven young volunteers. Hassanein, a 22-year-old engineering student at Helwan University, said that the team includes doctors, engineers, and others who work in different fields. “It was launched in 2013 by Hany Bahgat, who works in the digital marketing field, as he noticed how fake news flooded social media following the 25 January 2011 revolution,” Hassanein said.

However, he joined the team because he was a big fan of their work. “They were requesting new members, providing a quiz to those interested in joining them,” said Hassanein, adding that the job required research and fact-checking skills.

He said that their Facebook page has more than 1 million followers, and their Twitter page has 14,000. “We build credibility with our audience who trust us, as we provide all our posts with official, documented sources. However, we face some rejection from users, as posts oppose their own beliefs or opinions.”

The Da Begad team coordinate online and organise their work through a comfortable schedule as they all have their own jobs. “We review all news, carefully check it, then publish on social media channels and our website,” noted Hassanein, adding that they believe in what they do, even though it is not a paid job.

Meanwhile, “Akhbar Metre” (News Metre) is another Egyptian project, the main mission of which is to fight fake news. Their bio reads: “the project aims at assessing and evaluating the professionalism and truthfulness of Egyptian news that are shared online and promote a critical mindset among media consumers. Our goal is to put pressure on formal media channels online to commit to ethical and professional frameworks in news production, to avoid using manipulative techniques in their news, and to stop sharing false news.”

Nourehane Saif Eldin, a journalist and one of the project’s members, said, “our main purpose is to academically monitor and check news on media websites then evaluate it in term of professional, objective reporting.” She added that people have the right to receive true news. “It’s a human right,” noted Saif Eldin.

The team is comprised of six members, according to Saif Eldin, including journalists, social media specialists, video editors, and the founder, Haytham Atef. “We don’t just focus on negatives acts, when there is positive, professional reporting, we highlight it,” Saif Eldin said.

In Iraq, From 2013 to 2016, three projects were launched on social media: Fakepostspage, Peace Bloggers, and Tech for Peace, as a result of fake news that flourished due to conflicts and the rise of the Islamic State group in the country. “Young people feel obliged to maintain societal peace,” said Muhannad Munjed Hameed, an Iraqi blogger and fact-checking trainer. “I feel obliged to do something towards fake news, as a main responsibility,” he said, adding that “fabricated news has a negative effect on society and national unity. It leads to communal violence and dissemination of hate.”

Hameed started his profession as a fact-checking trainer with Iraqi Network for Social Media (INSM) and Media in Cooperation and Transition (MICT), as well as other international institutions, with the aim of training young people on how to fact-check news, starting first with media personnel, activists, and then university and high schools students.

“We train people to spread the culture of fact-checking in their workplaces and communities,” noted the 28-year-old blogger, adding that most workers at the three aforementioned projects are university students and bloggers, not journalists.

Moreover, the Lebanese newspaper Annahar launched five months ago a project led by journalists and reporters to combat fake news. “At first, we launched a Facebook page entitled ‘LebanonNowNews.com’, and published three pieces of news with catchy headlines to attract readers, but actually, the news did not contain any real news. However, it was a message from the newspaper to readers to say to them, ‘do not open any source, believe, or share anything without verifying it,’” said Diana Skaini, head of digital content at Annahar.

This page was just the beginning for the Lebanese newspaper, part of a larger campaign to counter fake news and rumours. “The campaign is named “Annahar, what you read, not what you see”, which means “reading news in depth,” explained Skaini, noting, “Arab societies need truth and true information, people need to understand what is going on in the world; credible and trusted information, not catchy headlines or fabricated news.”

Meanwhile, Annahar launched a section entitled “Annahar counters fake news”, through which it communicates with reporters in the most significant international media, such as the BBC, Le Monde, and Le Parisien, which have sections of journalists to fact-check news. “Each organisation has its section of seven specialised journalists to only fact-check news,” Skaini pointed out, noting that Arab media outlets do not have such departments.

“This is because they don’t know how to do that or the tools they need, and of course, it would not be easy to have seven journalists only for fact-checking; it would be a financial burden on any media organisation,” she said.  However, she noted that it is never too late to get on the right track to implementing international practices. “We can benefit from international media experiences,” she said.

On the other hand, Jordan has taken the mission through an academic approach, with the Jordan Media Institute creating a project on media and information education. “We offer trainings and academic programmes to school and university students in order to teach them doubting skills before sharing anything online,” said Anoud Al Zoubi, a Jordanian communications professional, fact-checking trainer, and TV and radio producer.

On social media, the institute launched “Akeed.jo,” a Facebook page to monitor news published in Jordanian media, enhance public monitoring, and spread the culture of media accountability among the media, journalists, and society. “The main task is to correct fake news and rumours,” Al Zoubi noted, adding that they teach students technological tools such InVID and Google tools to fact-check news.

“We also teach them that the virtual world is the same as the real one, has main ethics and responsibilities, and that they do not have the absolute freedom to do or publish whatever they want,” Al Zoubi concluded.