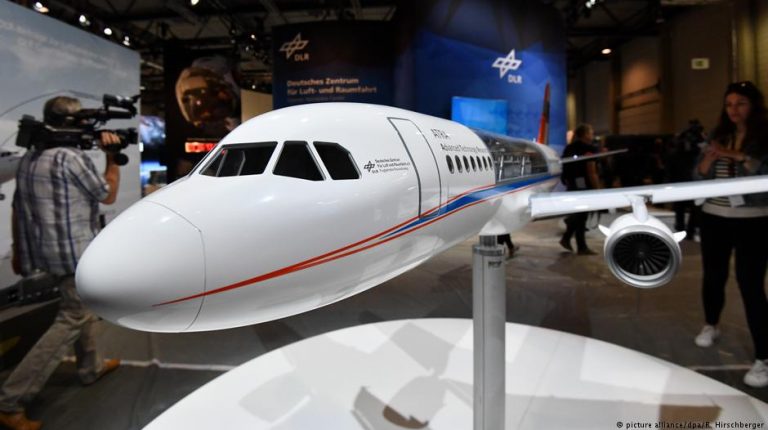 The world’s longest-running air show has opened to aerospace industry officials and an estimated 150,000 visitors, who want to see the latest in aviation technology, including 3D-printing and electric planes.Now in its 109th year, the bi-annual event held south of Berlin presents modern aircraft, new air and space technology and features a program of displays and conferences that target both experts and the general public.

Claiming to be the longest-running air show in the world, this year’s event hosts 1,100 exhibitors from over 40 countries, which showcase their latest innovations — among them conceptual designs for flying taxis, zero emissions aircraft and 3D-printed drones.

Read more: How soon till we all fly in electric planes?

“Today, ILA stands for innovation and leadership in aerospace. Thanks to our efforts, the world’s very first air show is now leading the way into the future,” said Volker Thum, managing director of the German Aerospace Industries Association (BDLI).

Last year, the global aerospace industry garnered revenues of more than €40 billion ($48 billion) — up 6 percent from the previous year, and boosted strongly by tailwinds from the travel sector which grew by 7.1 percent to 4.1 billion passengers worldwide in 2017.

Flying into the future

This year’s ILA Berlin revolves around key issues shaping the future of aviation. Sustainable air travel is one of the most important topics there, as the aviation industry aims to cut net CO2 emissions in half by 2050 as measured against 2005 emissions. To achieve their goal, planemakers are looking at alternative fuels, including those sourced from algae.

Read more: To fly or not to fly? The environmental cost of air travel

Another key innovation emerging is called “additive manufacturing,” meaning the 3D-printing of aircraft parts, and a market estimated to be worth billions. The technology offers weight reductions of 30 to 55 percent, which could, for example reduce the weight of an Airbus A350 XWB by up to 1,000 kilograms. Every kilogram shaved off means 25 tons of CO2 can be reduced during an aircraft’s lifespan.

E-mobility in the air is also shaping up to be one of the most promising approaches. At ILA, aircraft manufacturers and electronics companies are showcasing design models of hybrid aircraft capable of carrying up to 100 passengers.

Rolf Henke, a senior official of research think tank, German Aerospace Center (DLR), said that electrically-propelled small aircraft were no longer a pipedream. “We are still about ten years away from such planes, including five years for research and five years for development,” he told German news agency DPA. “These could be 19-seat light planes for regional flights and based on hybrid motors or fuel-cell technology,” he added.

Read more: Amazon test drones to take off after US approval

DLR also presents a project called Unmanned Freight Operations (UFO), a pilot-less aircraft, that is, designed to transport cargo. All over the world, engineers are developing unmanned aircraft for transporting goods and even passengers, for example, in flying taxis. ILA shows what is already possible and will discuss the regulatory challenges that need to be overcome in future.

ILA Berlin 2018 will also become the launch pad for a new Franco-German cooperation to build a new fighter jet to replace Eurofighter Typhoon and Rafale warplanes beginning in 2040.

German Chancellor Angela Merkel is expected to sign an outline document that will launch the program. The declaration sets out in detail how the partners — notably France’s Dassault Aviation and Airbus, Europe’s aerospace giant — will approach the multibillion-euro project.

The new fighter jet is supposed to be acting on its own as well as commanding a squadron of other weapons, including drones. But it’s not yet been decided if the new plane would be only manned or also have an unmanned option.

The move to develop a new warplane is seen as a preliminary step towards overcoming differences that have left Europe struggling to maintain three competing fighter programs — France’s Rafale, the Eurofighter made by Germany, Britain and Italy, and Sweden’s Gripen.

Germany and France also plan to sign a document at the air show in which they agree to explore the joint development of a new maritime surveillance aircraft, with a goal of making it operational by 2035.