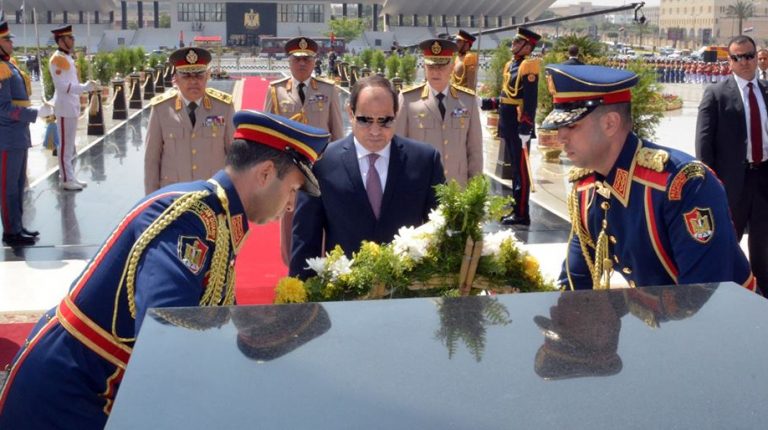 As the Egyptian state celebrates Sinai Liberation Day, President Abdel Fattah Al-Sisi addressed the nation on Wednesday saying that, “threats on Sinai have not come to an end.”

Al-Sisi explained that throughout the past years Egypt has been dealing with a wave of militancy from “terrorist groups, which are sponsored and financed by some countries.” He added that the experience of “recapturing Sinai taught us that the Egyptian people will not let go of their lands, and are able to protect it in peace and in war.”

The president, who has been elected last month for another presidential term, has been a vocal opponent of Islamist militancy, which came at a peak in 2013, after the ouster of former Islamist President Mohamed Morsi.

Several military campaigns, spearheaded by the Egyptian army and the police, have attempted to limit and restrict the occurrence of militant attacks on security personnel in the Sinai Peninsula. Hundreds of civilians, security personnel, and militants have been killed in the process.

Al-Sisi said that “as we continue to fight terrorism, we also aim to continue developing Sinai.”

Sinai Liberation Day is a commemoration of the withdrawal of all Israeli military and civilian personnel, including settlements, on 25 April in accordance with the 1979 peace treaty between Israel and Egypt.

On the same day of the celebration, the military spokesperson announced that three military personnel have been killed in an ongoing military campaign.

The Sinai 2018 military campaign has begun in February.

The Wednesday statement also said that 30 militants have been killed in action, including an alleged leader of an “extremist group” raising the number of killed militants, as announced by the military, to more than 100 individuals.

Early this week, Human Rights Watch published a report arguing that “the Egyptian government campaign against an affiliate of the Islamic State group in North Sinai has left up to 420,000 residents in four north-eastern cities in urgent need of humanitarian aid.”

The statement was heavily denounced by pro-state media and parliament members. The army spokesperson told privately owned TV Sada Al-Balad that the report was a fake and that waves of supplies, and aid have been entering North Sinai since the start of the campaign, denying the details that were mentioned in the report.

Engineers Syndicate leader to remain in detention for ‘inciting protests’