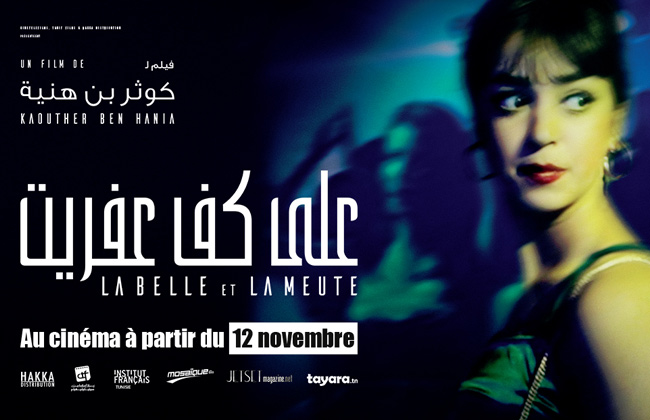 The second edition of Cairo Cinema Days, screenings organised by Zawya Cinema, kicked off last Monday, aiming to highlight the productions of Arab cinema by presenting independent Arab films which critics praised and that participated in many regional and international festivals.

The films will be screened from 23 to 30 April at several cinemas: Karim, CimaTech in Downtown, and Cinema Zamalek.

Daily News Egypt takes a closer look at the films chosen by the festival to discover the films that address problems, obstacles, and violence faced by women in the Arab world, and also created by women, resisting the male-dominated filmmaking industry, proving that women can be good directors, script writers, etc.

Among these films is “Ala Kaf Afret”, which was directed and written by Tunisian director Kaouther Bin Hania, produced in 2017.

The story of the film is adapted from an accident that occurred in 2012 during which a female university student who studies at a university in Tunis and goes to a party with her friends, then falls in love with a young man at the party that she met for the first time. After that, she decided to walk with him to a hotel. During her walk, three policemen stopped them, raped the young woman, and extorted the male.

The story is inspired by memoirs published by the Tunisian girl under the title “My sin is that I got raped”.

The film presents, in an hour and a half, the details of her rape by the policemen, reviewing her suffering with the male-driven societies that view her as the one responsible for that violation.

It documents the suffering of the girl who seeks to complain and gain her rights, while the authority meant to receive the complaint and transfer it to prosecution is her opponent.

The film shows, boldly, the disgraceful practices of some Tunisian policemen against citizens that were practiced before the fall of the regime of Zine El Abidine Ben Ali.

The lead actress of the film, Mariam Al Ferjani, previously said in a panel discussion on the sidelines of the 14th Dubai International Film Festival that she did not meet the victim before shooting and that she relied only on reading the details of the incident as well as the book that the girl wrote about it.

She continued that she met her after the screening of the film, and that she was very excited to learn about her opinion of it.

The victim thanked her a lot, Al Ferjani said, describing that as the best award she received.

“It took four months to prepare the film, while the filming took only five weeks and the film received support from the Tunisian Ministry of Culture in its production,” Al Ferjani stressed.

The film Walili was also produced in 2017, directed by Moroccan director Fawzy bin Saed. It presents a love story between Abed El Kader, a security guard, and Malika, a servant.

The newly married couple love each other, despite the financial difficulties they face. As the story unfolds, the film represents the suffering of the societal class that includes servants and the obstacles that they face, including sexual harassment and the inferior look they receive from the rest of society.

The film Looking for Umm Kulthum is another one of the films that was chosen by the festival, produced in 2017.

The interesting thing about the film is that its director and producers are not Egyptian, despite it being about an Egyptian singing icon. The film is directed by Iranian Sheren Nashat and is a joint production of companies and institutions from Germany, Austria, Italy, and Morocco.

It is a feminist film, as it deals with the struggles and sacrifices that Umm Kalthum made until she was able to cross the red lines of society, reaching the throne of art.

Nashat did not focus in the film on the journey of Umm Kalthoum in singing and how she became the most important singer in Egypt in her time.

Instead, she refocused on presenting the strong personality of Umm Kulthum and how influential she was.

Umm Kulthum, in the film, influences the heroine, who is a director living in exile, making her decide to make a film about the life and art of Umm Kulthum, with a look at the struggle and obstacles that she faced.

The character of Umm Kulthum is represented in the film by three actors: Noor El Amar, who performs the character during childhood, Yasmine El Rayes, playing Umm Kulthum as a young woman, and actress Najia al-Saqli, portraying her as an old woman.

For her part, El Rayes previously told Daily News Egypt in an interview that it took about three months for her to prepare for the role of Umm Kulthum in the film.

El Rayes stressed that the film also represents Egyptian history and its variability from 1920 to 1975, in the form of an interesting drama, not in the form of a documentary.

El Rayes assured that Umm Kulthum was a rebellious and courageous figure who could impose herself during an era in which power was usually reserved for men, making herself the dominant woman singer among many giant male singers over many generations, penetrating many barriers in her eastern society.

Zawya was established by Misr International Films (MIF) in March 2014 as the first art-house cinema in Egypt, located in Downtown’s Cinema Odeon.

Zawya screens different types of films, including short films, documentaries, feature films, and experimental works. It has a programme that is divided between theatrical releases and special events.