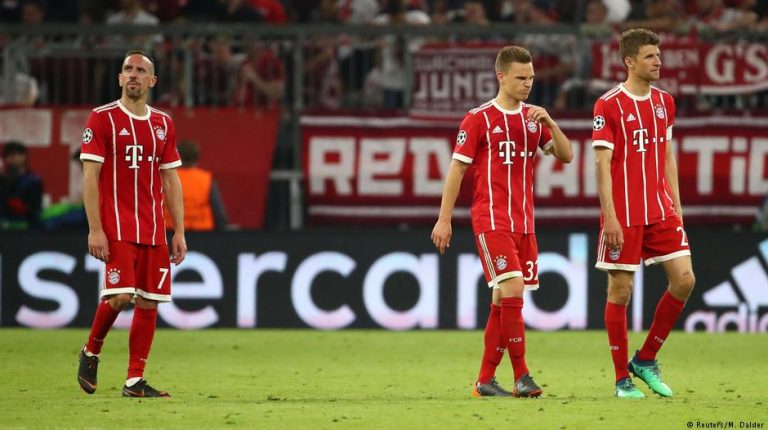 Wednesday’s Champions League semifinal first leg against Real Madrid was a rare chance for Bayern Munich to measure themselves against Europe’s very best. But the 2-1 defeat still leaves many questions unanswered.Over the course of their 23 meetings in European competition, Bayern Munich and Real Madrid have become barometers for each other’s success, and the fixture’s rich history has given rise to huge mutual respect.

In Germany, Real are deferentially known as “die Königlichen” – the Royals. In Spain, they refer to the German giants as the “Bestia Negra” – the Black Beast.

Unfortunately for Bayern on Wednesday, the Royals punished the Beast for needless mistakes and taught Jupp Heynckes’ side a lesson in taking chances – chances they can afford to miss in the Bundesliga.

“Going into the game, I didn’t think we would have so many clear-cut opportunities,” said goal-scorer Joshua Kimmich. “But we were too naïve, whereas Real were clinical.”

There was nothing naïve about Kimmich’s own finish, catching out Keylor Navas at his near post to give the hosts the lead, but Bayern failed to kill the game off. Twice, Franck Ribéry found himself in promising positions in front of goal but stumbled in the first half and shot straight at Navas in the second.

“We needed to be more cold-blooded,” said Thomas Müller. “We needed a killer instinct, but we showed too much respect and left them alive.”

In contrast, Real were ruthless in capitalizing on Bayern’s mistakes.

If Javi Martinez could be forgiven for taking his eyes off Marcelo as Cristiano Ronaldo weighed up another spectacular over-head kick, leaving the Brazilian to fire home the equalizer unmarked, there can be no explanation for Rafinha’s suicidal pass to Marco Asensio which led to the winner.

And yet, perhaps most worryingly for Bayern, and for the Bundesliga as a whole, this was far from a vintage performance from the reigning European champions, and far from the highest quality semifinal we have seen in this competition in recent years. Both teams were lethargic, slow and nervous for long periods, Cristiano Ronaldo was quiet, and the atmosphere was flat throughout.

Every football club needs a rival. Every club needs a sporting equal against which a team can measure their own abilities.

In the absence of genuine domestic competition in the Bundesliga, Bayern have never been in greater need of an external examination, but Wednesday night left more questions than answers.

How good are Bayern Munich really? We’ll find out in the Santiago Bernabeu next week.