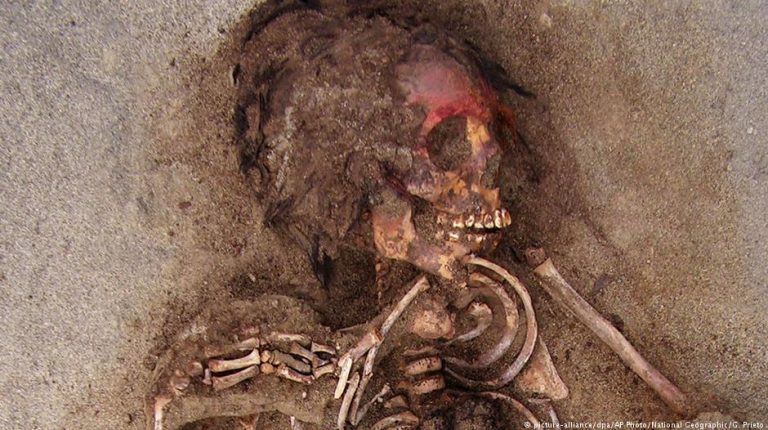 Researchers have found that more than 140 children were sacrificed in a single event in Peru about 550 years ago. But why were so many children ritually killed?Archaeologists in Peru have uncovered what may be world’s largest single incident of mass child sacrifice in history.

They found that more than 140 children were ritually killed in a single event some 550 years ago during the ancient Chimu civilization, according to a National Geographic report on the discovery.

Some 200 llamas were also sacrificed as part of the ritual, the researchers found.

The discovery, supported by grants from the National Geographic Society, was made close to what was then the capital of the Chimu Empire — Chan Chan, a UNESCO World Heritage site near modern-day Trujillo.

“I, for one, never expected it,” said John Verano, one of the lead researchers told National Geographic. “I don’t think anyone else would have, either.”

The Chimu civilization flourished between 1000 and 1470 along the Pacific coast in modern Peru before the empire was defeated by Inca forces. At its peak, the Chimu Empire spanned the territory between what is today southern Ecuador and the Peruvian capital of Lima.

The site of the discovery — Huanchaquito-Las Llamas — first grabbed headlines in 2011 when remains of 42 children and 76 llamas were found during the excavation of a 3,500-year-old temple.

The numbers eventually swelled to the current tally by the time excavations ended in 2016.

The 140 sacrificed children were aged between five and 14, while the llamas were less than 18 months old, National Geographic reported.

The skeletal remains of both children and animals show evidence of cuts to the sternum as well as rib dislocations, suggesting that the victims’ chests were cut open and pulled apart, perhaps to facilitate the removal of the heart, the publication said.

Many of the children had their faces smeared with a red cinnabar-based pigment — most likely as part of the sacrificial ritual.

Researchers suggest that the mass sacrifice of children may have been an attempt to appease the gods at a time when the arid coastline was being battered by “severe rain and flooding.”

“When people hear about what happened and the scale of it, the first thing they always ask is: why,” Gabriel Prieto, the other lead researcher, told National Geographic.

Prieto and team said the excavations show that the victims were buried in a layer of mud. The layer could have been caused by the rains in the usually dry area — probably linked to an extreme weather event such as El Nino.

High sea temperatures caused by the El Nino effect would have disrupted marine fisheries in the area, while coastal flooding could have overwhelmed the Chimu’s extensive infrastructure of agricultural canals, the publication said.

“People sacrifice that which is of most and greatest value to them,” National Geographic quoted Haagen Klaus, a professor of anthropology at George Mason University, as saying. “They may have seen that [adult sacrifice] was ineffective. The rains kept coming. Maybe there was a need for a new type of sacrificial victim.”

The Chimu Empire perished just decades after the mass sacrifice.