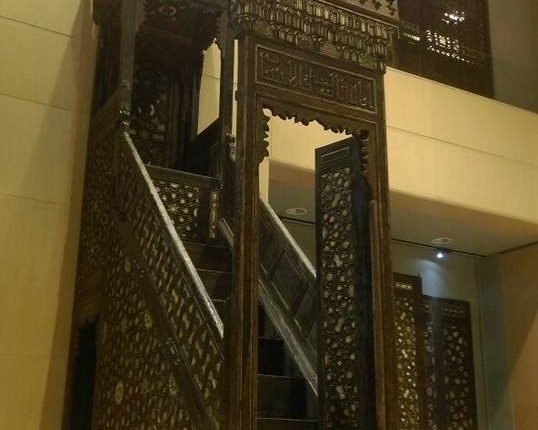 The Ministry of Antiquities announced on Sunday that it transferred the dais of a Mamluk-era mosque, Abu Bakr Muzzher, for display at the National Museum of Egyptian Civilisation making it the first transferred rostrum after announcing the decision to relocate some of the heritage daises from their original mosques to showcase them at different museums.

The decision came amid a wide spectrum of anger from heritage preservation activists who insist that moving the tens of thousands of years old daises affects them and reduces their historical importance.

For his part, Mostafa Waziri, secretary general of the Supreme Council of Antiquities, stated in a press release that he personally witnessed the process of transferring the dais, adding that it will be the last relocated rostrum, as the ministry plans not to relocate any other ones except in urgent cases that will be carefully studied.

The dais was restored before being displayed and it is currently open to the public at its new location.

Ghareb Rostom, the head of the Ministry of Antiquities’ Central Administration of Conservation, added in the press release that the rostrum had to be transferred from its original location due to the risk of severe destruction because of the ground water rise in the area, which led to the closure of the mosque.

“Transferring the rostrum from its original place is a wise decision, it saved it from permanent destruction,” Rostom said in the press release. The mosque has been closed for five years for restoration.

Obama declares US not at war with Islam