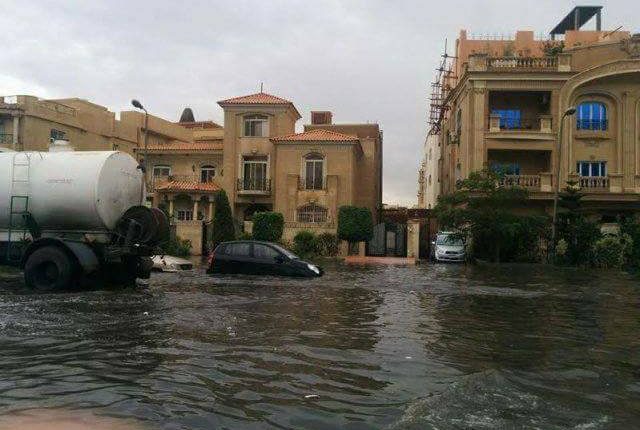 Over the past several days, social media feeds have been flooded with posts, images, and videos on the crisis of drowned streets, mainly in Fifth Settlement, New Cairo, due to heavy rainfall. Furthermore, social media not only highlighted the crisis, but also ridiculed the lack of sufficient infrastructure to handle the heavy rain which the Greater Cairo area witnessed last week.

Heavy rain hit Cairo last Tuesday and Wednesday, leading to streets and squares to become flooded while many cars were substantially submerged in rain on the roads. Moreover, the water entered some residential units and villas and damaged furniture.

Despite the criticism of the infrastructure in New Cairo, real estate experts and many citizens are betting that real estate in the area will remain priced highly and will not be affected by the crisis.

Ashraf Diaa, managing director at ERA West Associates, said that strong rain is becoming a bigger threat than competitors for some developers.

Diaa added that the rain crisis last week sounded an alarm for consumers buying in and outside New Cairo. With all eyes on the New Administrative Capital and Mostakbal City, consumers are wondering if the same infrastructure and durability measures are being used in the new urban projects.

Diaa explained that after what happened, customers will be looking at greater aspects when buying property in the Fifth Settlement. Furthermore, customers will focus on the history of the developer and the whole infrastructure in the region.

He noted that Sheikh Zayed is active and proved that the area can handle heavy rain, pointing out that developers may look to that city to launch new projects and invest in.

He reaffirmed that the prices in New Cairo will not be affected badly by the rain, but said there could be a slowdown in price increases in the area, while arguing that there is no villa or unit belonging to a developer that collapsed due to the rain.

However, the electricity outage during and after the storm is a big issue that may affect clients’ choices, according to Diaa.

Adham Hesham, associate vice president for real estate at Beltone Financial, agreed with Diaa that the projects implemented by large real estate investment companies in New Cairo were not affected by the rain like in the main streets of the Fifth Settlement and nearby real estate.

On the other hand, the rain crisis may lead to increased demand for real estate west of Cairo in Sheikh Zayed and Sixth of October due to the fact that the infrastructure there may prove to be of better quality, according to Hesham.

Developers had previously predicted that the real estate sector would rebound this year in line with the expected decline in interest rates and improved purchasing power of consumers.

Daker Abdellah, board member of the Egyptian Federation for Construction and Building Contractors (EFCBC), said all countries of the world are witnessing similar situations, which he said are treated as emergency and exceptional circumstances and not disasters resulting from negligence, noting that it is impossible to deny the scale of development of Egyptian roads and infrastructure recently.

Meanwhile, citizens have another view regarding their preferences in buying property in the Fifth Settlement and New Cairo.

Daily News Egypt polled some citizens on their opinions regarding the demand for and the prices of property in the Fifth Settlement.

Eman Yousef agreed with her and said that she will think thoroughly before buying property in the Fifth Settlement.

Meanwhile, Mohamed Abdallah sees that this crisis will not affect the prices because the region is witnessing huge demand for purchasing property. He thought the demand may slowdown but not decrease.

However, Madgy Abdel Fattah said he believes the real estate prices in the Fifth Settlement are exaggerated and do not match the services provided, noting that in its first test, the infrastructure proved its failure.

For his part, Mohamed Samir pointed out that the decrease on demand in New Cairo will not affect the prices because the real estate market in Egypt is controlled by greedy traders and brokers.

Nevertheless, Randa Fouad mused that if the rainfall crisis affected the demand and prices in New Cairo, it would increase property prices in Giza.

Maged Sabry said that if demand decreased in New Cairo it would only be for a while and then increase again to its natural level.

Kaled Abo Ali agreed with Sabry that the prices will increase again in the region because people forget they consider investing in real estate to be a safe heaven.

Demand for property in Egypt drops 7% in July: Aqarmap

Op-ed review: Arab forces should not be implicated in Syria