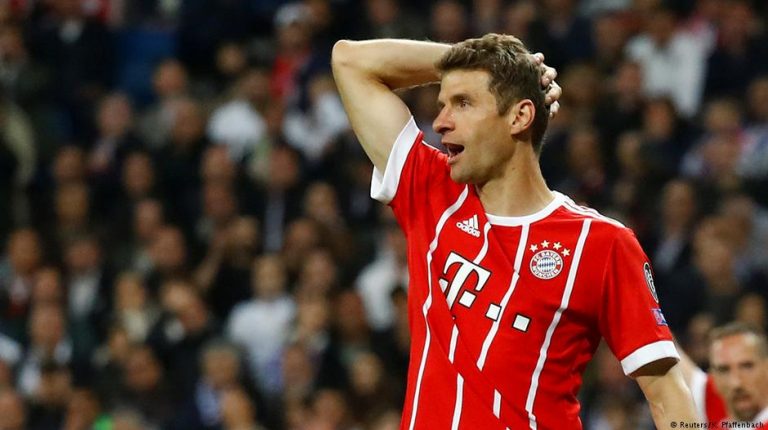 Bayern Munich have thrown away the club’s best chance of winning the Champions League since their 2013 triumph. Real Madrid were there for the taking, but galling misses at clutch moments proved Bayern’s downfall.Bayern Munich should be on their way to Kiev. The Champions League final has once again slipped through their fingers for a fourth consecutive year, but on this occasion the club’s failure is difficult to explain.

The German goalkeeper’s blunder just after halftime will be replayed across the world over the next week, and will be relived in the 29-year-old’s mind eternally. He’ll be hard on himself in those moments where he finds himself alone and in a contemplative state.

Yet Ulreich’s moment of madness was not to blame for Bayern failing to reach the Champions League final. Instead, the German champion’s profligacy in front of goal – from some of their star players – let them down when it mattered most.

In the home leg, the culprits were many. Franck Ribery’s failure to score in the Champions League since March 2015 shone through as he miscontrolled the ball and fluffed a fantastic opporunity to put Bayern 2-0 up against a poor Madrid team.

And at the death, with Bayern down 2-1 by that stage, Robert Lewandowksi blew a glorious chance – one which he usually gobbles up in the Bundesliga – to leave his side with a mountain to climb.

In the return leg, Lewandowksi went missing again, extending his barren run in the Champions League to five matches. For a world-class striker, that record isn’t good enough. His opposite number, Karim Benzema, oft criticized for his own exploits in the penalty box, scored two.

With the odds well and truly against them, Bayern still should have progressed, albeit against a more switched-on Madrid side.

Defensive errors prove more glaring in the media lights and Rafinha’s gaff in the first leg and Ulreich’s “blackout” – as coach Jupp Heynckes described it – duly featured heavily in the highlights reels. It’s the unfortunate nature of playing in the defensive line, but Bayern’s attacking players have to shoulder the majority of the blame.

The frustrating aspect for Heynckes must be that the profilgacy in front of goal came from his most experienced players – Ribery, Lewandowksi and also Thomas Müller and Mats Hummels. The less experienced duo of James Rodriguez and Joshua Kimmich, on the other hand, stepped up to the occasion.

Madrid were there for the taking. Fifteen points off Barcelona in La Liga and coming off a quarterfinal where they were second-best to Italian giants Juventus. This is not the same team that has dominated Europe over the past few years and Bayern should be preparing for a final showdown in Kiev.

It’s a showdown that Bayern would have entered as favorites, too. The last four in this season’s Champions League is perhaps the weakest lineup in the past decade and, whether against Roma or Liverpool in the final, Bayern would have been confident of victory.

Bayern let Madrid off the hook at clutch moments over both legs and it will be difficult to assess how incoming coach Niko Kovac can improve their chances next season. This was probably Bayern’s last – as well as best – chance to reclaim the Champions League with their current squad.

Lewandowski could well find himself at Madrid next season, while even if Ribery and Arjen Robben do sign mooted contract extensions, their age means we could have seen the last of their dominant seasons. Bit-part players rarely prove decisive in Champions League finals.

A changing of the attacking guard is inevitably coming to a head, despite Bayern attempting to drain the last remnants out of their old charges. The burning question is whether they already have the goods or if they need to significantly invest.

Kingsley Coman produces nowhere near the goals or assists necessary for a starring role, while Corentin Tolisso has failed to live up to his hefty €40 million price tag. It is uncertain whether the incoming Serge Gnabry or Leon Goretzka can immediately slide into the starting XI, indeed Bayern’s previous attempts to replace their stars have fallen flat in Renato Sanches and Douglas Costa.

The Champions League is unlikely to be as quality-starved in the final four next season, if Bayern can even navigate their way into a fifth semifinal appearance in six years. A reboot is necessary, but as it stands, with Kovac to make his debut in the competition and the team’s attacking lineup uncertain, Bayern look like they’ve passed up their best chance of lifting the coveted trophy for some years.