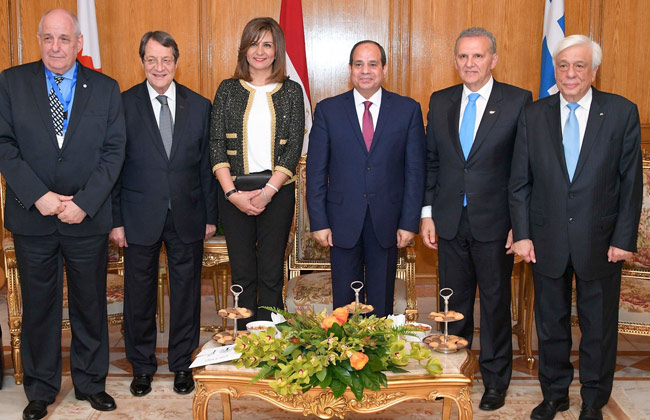 A tripartite summit is expected to be held in Athens between the leaders of Egypt, Greece, and Cyprus in the fall of 2018, according to media statements by presidency spokesperson Bassam Rady on Tuesday.

During the summit, the leaders are expected to discuss additional efforts to strengthen their relations in various fields, including energy, and tourism.

Regarding tourism, the leaders will focus on discussing organising touring trips between the three countries.

The leaders agreed on the summit during their meeting in Cairo that came on the sidelines of the “Roots Revival Week culture festival currently being held in Cairo.

President Abdel Fattah Al-Sisi met with his Greek and Cypriot counterparts and discussed trilateral cooperation in the gas sector, and they also tackled the advanced infrastructure which Egypt already has in that field, as well as recent discoveries in the Eastern Mediterranean region, Rady said in statements to the TV channel MBC.

He explained that the cooperation of the three countries in the field of gas extends to the European Union, which will qualify Egypt to become a regional hub for the distribution of gas and electricity.

Rady said that Egypt’s relations with Greece and Cyprus are currently witnessing the most prosperous era, and that that tripartite cooperation mechanism between Egypt, Greece, and Cyprus is effective and fruitful. He also pointed out that the three countries have a deep cultural balance, geographical proximity, and common interests, including politically.

Greece and Cyprus have strongly supported Egypt after the June 30 2013 uprising and inside the European Union, as they believe that the developments that have taken place in Egypt since that time are in favour of the stability and security of the Mediterranean region, he concluded.

The Roots Revival Week began on Monday and will last for one week in Alexandria. During the week, members of the Greek and Cypriot communities will visit different historical places that unite the three countries, including Bibliotheca Alexandrina, Ras El Tin Palace, the Greek Orthodox Church of Alexandria, Greek Square, the Greek Tombs of the Shatby district, and the Alexandria National Museum.

The Roots Revival Week is the first initiative of its kind that aims at reviving the public celebration of the Greek and Cypriot communities living in Egypt.