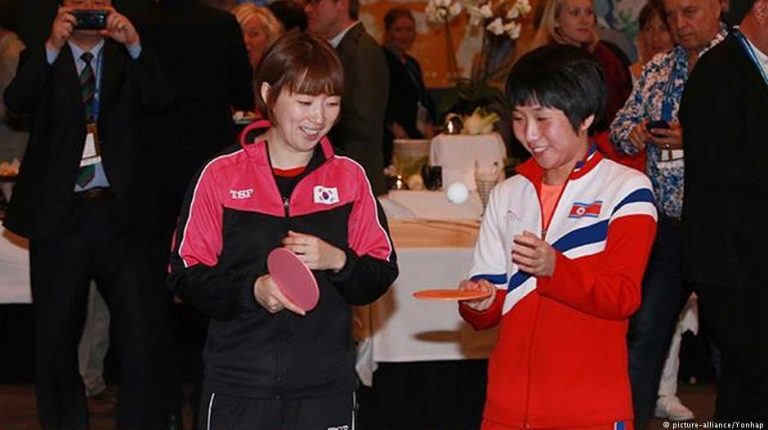 After being drawn against each other in the quarterfinals of the tournament in the southwestern city of Halmstad, the two teams applied to merge and advance to Friday’s semifinal together, where a joint Korean team is now to face either Japan or Ukraine.

“When I informed the board of directors of the development, the representatives of the joint team stood up and applauded in a show of support for this historic step,” said Thomas Weikert, president of the International Table Tennis Federation (ITTF).

Ryu Seung-min, the vice-president of the South Korean Table Tennis Federation and member of the International Olympic Committee (IOC), praised the ITTF for its spontaneous decision.

“This is an important statement to promote peace between our two countries through table tennis,” said the 2004 Olympic champion.

This is not the first time that the political rapprochement between the two Koreas has been reflected in the sporting arena. At the Winter Olympics in Pyeongchang in South Korea this past February, a joint Korean women’s hockey team took to the ice. Despite the fact that they lost all three group games and only scored one goal, the fact that the South Korean and North Korean women competed as one team seems to have contributed to the recent thaw in diplomatic tensions.

On April 27, Kim Jong Un and Moon Jae-in met in Panmunjom where they agreed to work towards the denuclearization of the peninsula and to reach a deal within the year to officially end to the Korean War, which has been in a state of ceasefire since 1953.