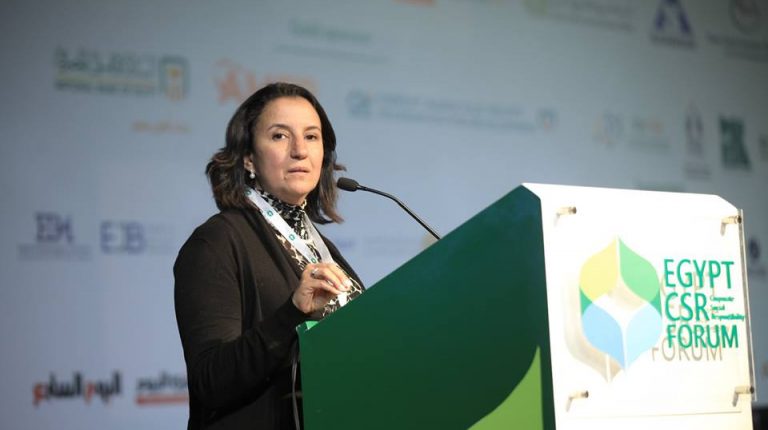 Sherine El-Sabagh, head of the policy unit and supervisor of development programmes at the Ministry of Trade and Industry, said at the forum that the government mainly relies on the private sector to support the field of community development, adding that it also focuses on directing its companies to the needed sectors and fields in order to implement development in the needed areas.

“Many of the private sector companies tend to spend their allocated CSR budget into building an attractive, nice fountain in one of the main roads. Yet, what we do is direct them; instead of doing so, we request that they pave a street in one of the industrial areas,” she explained.

El-Sabagh also discussed the improvement in the five-year strategy the government issued in 2015 in order to raise GDP. She stated that the goals of the strategy mainly aim to focus on  industrial development, increasing the number of SMEs, and enriching foreign trade, as well as investing in and training technical labour.

The strategy, according to her, is actually achieving more than expected, especially after the floatation, which resulted in a 10% increase in the total number of exports. Yet, the main issue the ministry is currently facing is the ability of filling the gap between the required technical labour skills and the skills graduates currently enter the market with.

“We are currently focusing on filling the gap we found to be greater than we had expected between the required labour force and the existing one,” she explained.

She also stressed that the ministry aims to connect as many private sector entities as possible in order to fund them with the amount that their governmental allocated budget could not fulfil.

For his part, Ahmed Abdel Razik, chairperson of the Industrial Development Authority (IDA), asserted that the government’s current role is to attract foreign investments, leaving the other development missions to the private sector.

Abdel Razik said that the government aims to increase GDP from 17.5% to 21% by 2020. In order to do so, it offered investors 8m sqm of land in order to establish new industrial projects.

“What the government has offered in terms of lands to be used for industrial projects since 2016 is triple the number of offered lands from 2007 to 2016,” he added.

As for the obstacles the government is currently facing in order to use the CSR budgets in improving existing industrial sites, Abdelaal Hosney, adviser to the chairperson of the IDA, spoke about the problems they currently aim to overcome in order to achieve the most sufficient use of private sector’s CSR strategies.

Lack of side roads and transportation infrastructure is one of the most critical issues that industrial sites suffer from in Egypt, he said, adding, “even when there are roads, there are no utilities or provided services for the vehicles or drivers. The roads lack restaurants, hospitals, or any needed safety services.”

The lack of public transportation is also another struggle the IDA aims to fix in the five-year strategy. Lack of sewage, drinkable, or “even water to be used in industrial projects” are also still unsolvable struggles, which the IDA requests the private sector’s CSR funds to help cover in order to establish sustainable development plans.

Putin’s new limousine coming out of the blue?

SODIC impacts over 12,000 lives in past 2 years through CSR: Nadine Okasha