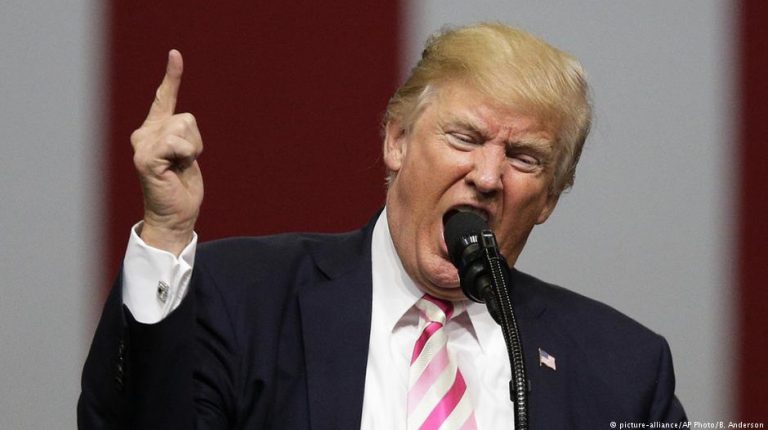 After months of threats, US President Donald Trump fulfilled his promise and pulled his country out of the Iran nuclear deal, ignoring the warnings of European allies that stressed they will uphold the deal, known as the Joint Comprehensive Plan of Action (JCPOA).

In a televised statement on Tuesday from the White House, Trump announced erasing 10 years of diplomacy to reach the deal, before the end of the four-day grace period for his European partners, the UK, France, and Germany, to modify the agreement between the world powers and Iran.

The decision is considered an erosion of one of the biggest foreign policy achievements of Trump’s predecessor, Barack Obama.

Trump described the deal as “a horrible one-sided deal that should never ever been made,” and he also warned that “any nation that helps Iran in its quest for nuclear weapons could be strongly sanctioned.”

He accused the Iranian regime of being “the leading state sponsor of terror.” He added that the deal has allowed Iran to “continue enriching uranium and—over time—reach the brink of a nuclear breakout.”

“Today, we have definitive proof that this Iranian promise was a lie. Last week, Israel published intelligence documents—long concealed by Iran—conclusively showing the Iranian regime and its history of pursuing nuclear weapons,” said Trump. However, he indicated that the US could forge a new deal with Iran “if they wanted,” saying, “the United States no longer makes empty threats.”

“In a few moments, I will sign a presidential memorandum to begin reinstating US nuclear sanctions on the Iranian regime. We will be instituting the highest level of economic sanctions,” said Trump.

In 2015, along with the UK, France, Russia, Germany, China, and the European Union, the US agreed with Iran on a long-term deal to curb its nuclear programme in exchange for sanctions relief. Under the deal, Iran limits its nuclear activities and allows inspectors of the International Atomic Energy Agency (IAEA) to examine its nuclear sites to ensure that its sensitive nuclear programme is exclusively for peaceful purposes.

Under the JCPOA, Iran unplugged two-thirds of its centrifuges, shipped out 98% of its enriched uranium, and filled its plutonium production reactor with concrete. The deal allows Iran access to more than $100bn of its assets frozen overseas, made it able to resume selling oil on international markets, and use the global financial system for trade.

In response, Iran rejected Trump’s accusations, and Iranian President Hassan Rouhani said in a televised speech that Trump is not loyal to his commitments. Rouhani said that he has ordered his country’s atomic agency to prepare to enrich uranium at industrial levels, and his foreign minister to negotiate with his European counterparts over the deal, as the deal could continue without the US.

He also warned Trump that he will not be able to win the “psychological war” with Iran, warning also that Iran could restart enriching uranium “without any limitations” within weeks.

Moreover, Iranian Minister of Foreign Affairs Mohammad Javad Zarif tweeted: “In response to US persistent violations & unlawful withdrawal from the nuclear deal, as instructed by President Rouhani, I’ll spearhead a diplomatic effort to examine whether remaining JCPOA participants can ensure its full benefits for Iran. Outcome will determine our response.”

Iran’s Supreme Leader Ali Khamenei accused Trump of lying more than 10 times in his announcement, describing it as “ridiculous” and “full of lies.”  In a meeting with Iranian intellectuals on Wednesday, Khamenei said that it would be illogical for Iran to continue the deal without securing the needed guarantees from the three European countries.

Trump’s decision was faced with international disappointment, including from the UK, France, and Germany. On his Twitter account, French President Emmanuel Macron wrote: “The nuclear non-proliferation regime is at stake.” He added: “We will work collectively on a broader framework, covering nuclear activity, the post-2025 period, ballistic activity, and stability in the Middle East, notably Syria, Yemen and Iraq.”

UK Secretary of State for Foreign Affairs Boris Johnson said he strongly regrets the US decision to withdraw from the Iran nuclear deal. Johnson wrote on Twitter that the “UK remains strongly committed to the JCPoA, and will work with E3 partners and the other parties to the deal to maintain it. Await more detail on US plan.”

High Representative of the EU for Foreign Affairs and Security Policy and Vice President of the EU Commission Federica Mogherini called on the international community to maintain the Iran nuclear deal, saying that the EU will remain committed to the continued full and effective implementation of the agreement.

“We fully trust the work, competence and autonomy of the International Atomic Energy Agency that has published 10 reports certifying that Iran has fully complied with its commitments,” Mogherini said. She added, “the lifting of nuclear-related sanctions is an essential part of the agreement. The EU has repeatedly stressed that the lifting of nuclear-related sanctions has a positive impact not only on trade and economic relations with Iran, but also mainly, crucial benefits for the Iranian people.”

UN Secretary General Antonio Guterres expressed his deep concern after the US decision, saying in a statement, “it is essential that all concerns regarding the implementation of the plan be addressed through the mechanisms established in the JCPOA. Issues not directly related to the JCPOA should be addressed without prejudice to preserving the agreement and its accomplishments.”

Furthermore, Russia, Turkey, and China said they regret the US decision.

On the other hand, Israel welcomed the move, and Israeli Prime Minister Benjamin Netanyahu said at a press conference that Israel fully supports Trump’s “bold decision” to reject the “disastrous nuclear deal with the terrorist regime in Iran.” Netanyahu added, “the removal of sanctions under the deal has already produced disastrous results. The deal didn’t push war further away, it actually brought it closer.”

Shortly after Trump’s statement, the Syrian government accused Israel of striking an Iran-linked army base south of Damascus, while the Israeli army ordered authorities in the occupied Golan Heights to ready bomb shelters “following the identification of irregular activity of Iranian forces in Syria,” according to an official statement from the Israel Defence Forces.

For its part, Egypt said, in a statement from its Foreign Ministry, that it “understands the US and international keenness to address all regional and international concerns in relation to the Iran nuclear deal, as well as Iran’s interference in the internal affairs of Arab countries,” stressing the need for Iran to fulfil all its obligations, in accordance with the Nuclear Non-Proliferation Treaty and the Comprehensive Safeguards Agreement with the International Atomic Energy Agency.

A number of Arab countries, including Saudi Arabia, the United Arab Emirates, and Bahrain, expressed support for Trump’s decision.

Any new deals with Iran must include Arabs: Egypt’s Foreign Ministry