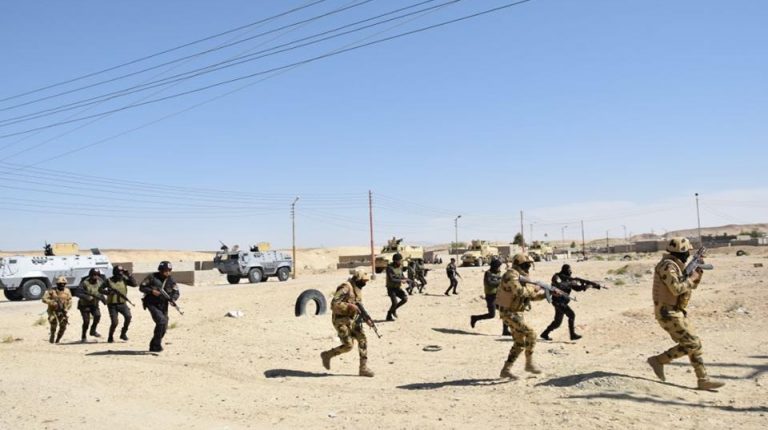 Over the past week of the extensive armed operation dubbed “Sinai 2018”, 21 alleged armed extremists were killed through gunfire with the armed forces during attacking 4 safe houses for the militants, while five others were arrested.

The 232 other suspects were also arrested, according to a statement by military spokesperson, Tamer El-Refaei on Thursday. The alleged extremists were hiding in one of the abandoned buildings in Al-Arish.

The security forces have targeted several terror targets, such as 391 dens and hideouts, including three explosive houses linked to a 100 metres tunnel. The armed forces also destroyed 30 vehicles that were set to target the security forces, and also found amounts of various firearms and ammunitions.

Al-Refaei added that the security forces have found and destroyed 15 tunnels, 21 explosive units, and wireless devices.

In  western Sinai, the armed forces destroyed four vehicles and found 13 other vehicles loaded with firearms. They also arrested 538 individuals from different nationalities, before crossing the borders illegally.

On 9 February, Egypt’s security forces launched the extensive military operation in Sinai dubbed Sinai 2018. The operation includes navy, air, and infantry forces. It aims to target “dens and ammunition storages that are being used by terrorist elements,” according to a previous statement from the armed forces.