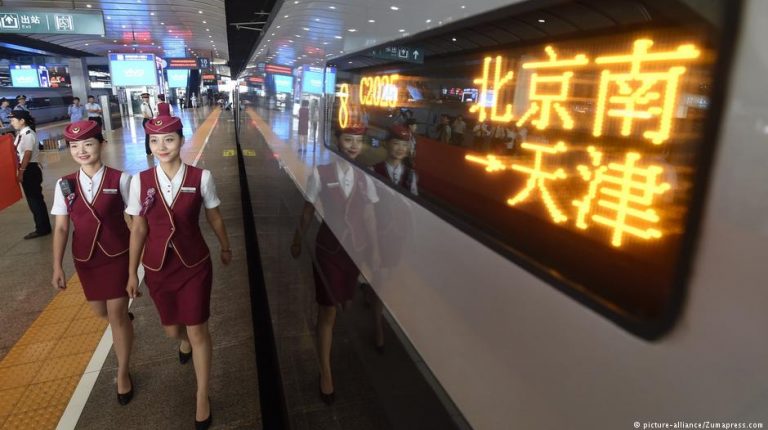 The Chinese government believes that it can become the top tech nation in the world sooner rather than later. Some milestones have already been met with more in sight as China looks to surpass the US, Japan and Korea.The power brokers in Beijing regularly refer to international trade rules during the ongoing trade dispute with the United States, a means of presenting China as a normal economic player on the international stage.

Yet at home, Chinese economic policy still reverts to a planned model. The meticulous planning extends to China's own economic expansion aims, something in evidence in the "Made in China 2025" strategy paper.

Presented in 2015, that document lists 10 key areas in which China intends to become a world leader by 2025. The scope of ambition is huge; aerospace, industrial robots and software, high-speed trains, electromobility, the modernization of power grids, medical tech, semi-conductors — it's all in there.

Many of these industries are ones in which the Germans have led for years. Beijing is working hard on building an Industry 4.0 vision to rival Germany's. But unlike in Europe's economic powerhouse, China's digitization drive is being led by the state rather than coming organically. And every two years, the decisions of the Chinese leaders are put to the test and re-adjusted if necessary.

For Daniel Caspari, an MEP for Germany's CDU party, it is high time European companies in possession of sensitive, cutting-edge technologies were protected.

"If China has committed itself to leading in 10 specific economic sectors, then the strategy for achieving that is clear. One point is, how can we extract know-how from other countries? The second point is, how can we, as the Chinese state or as a Chinese company, specifically invest in companies in a way which extracts know-how?"

Caspari is trying to bring about European legislation to address the issue. "We saw it with Kuka, the company in Augsburg, where it was said at the start: 'everything will stay as it is'.

"But now we can see that far more jobs are lost in Germany and being relocated to China. We now have a situation where 10 percent of Daimler has been sold! This worries me a lot. You don't buy 10 percent of one of the biggest and best car manufacturers without having strategic goals. These are things we will have to answer for."

In several sectors — telecommunications, high-speed trains, power generation — China is already well on the way to achieving its 2025 goals. "China is well on the way to becoming one of the world's leading manufacturers of robotics and alternative powertrain vehicles," says Jaqueline Ives from the Mercator Institute for China Studies (MERICS) in Berlin. "The problem areas are industrial software and the semiconductor industry."

In their attempts to establish a world-leading semiconductor industry, the Chinese are experiencing strong resistance from the US, particularly with regard to planned acquisitions of American chip companies. In April, the US imposed a seven-year ban on US companies supplying components to Chinese telecommunications firm ZTE.

In addition, recent takeover attempts have failed, such as the $146-billion (€122-billion) bid from Singapore-controlled Broadcom to take over US chip giant Qualcomm. US President Donald Trump banned the sale himself, saying US national security interests were threatened by such a large scale technology transfer to Asia. Meanwhile, Broadcom's corporate headquarters have relocated back to the USA.

The semiconductors example illustrates just how carefully China is planning things. Via the state-controlled "China Integrated Circuit Industry Investment Fund," the government hopes to provide an additional €25 billion in 2018 to help Chinese companies buy high-tech chip companies around the world, according to Bloomberg.

The US ban on sales to ZTE threatens its position and the Chinese government is trying to soften the impact by providing tax cuts for domestic chip manufacturers, according to Ives.

The topic of semiconductors is a sensitive one for many Western governments because of the important role they play in the defense industry. They are critical for the development of new weapon systems, even for a nuclear power such as China, while they are equally pivotal for aerospace development.

In addition, the Chinese rely on the technical know-how of foreign semiconductor manufacturers to build state-of-the-art data networks needed for 5G internet, and all that comes with that. Therefore, the failure of the Qualcomm takeover was a big setback.

Beijing has also readjusted its aims on Artificial Intelligence (AI). The government had earmarked €20 billion for its expansion in the coming years but politicians at provincial level in China want this doubled by 2022, to meet their own ambitions.

While this local ambition is welcome on one level, it also can cause problems in Beijing. Ambitious provincial decision-makers sometimes overshoot their targets in attempts to impress their superiors. Overcapacity can occur when there is a glut of competitors, the Chinese solar industry being a case in point.

Chinese telecommunications giant Huawei operates more than a dozen research centers around the world as a means of tapping into international IT knowledge and expertise. Electric carmaker NIO was founded in 2014 and already has 30 sites worldwide with both Chinese and international teams working on different prototypes and battery technologies.

IT companies Baidu, Tencent and Didi have AI research centers in Silicon Valley while the massive Alibaba intends to invest more than €10 billion in research in the next few years, in collaboration with top researchers at some elite US universities. According to MERICS, Alibaba already employs 25,000 scientists and engineers worldwide.

Something else that is happening is that more and more western-educated people with a Chinese family background are returning to the country to continue their studies and research there. They are not going back for the money, says Jacqueline Ives.

"Many believe that they express their creativity more in China, because in China, regulations and laws are more flexible in order to give space to new technologies and to allow them to develop dynamically," she says. This also applies increasingly to Western experts who go to China "to let off steam and because they feel they have a freer hand in their chosen field."

It was in the fall of 2017 that Eric Schmidt, then head of Google's parent company Alphabet, warned of China's imminent dominance in the field of AI. China aims to become the world leader in the field by 2030 and according to Beijing, the domestic Chinese AI industry will have a value of €125 billion by that year. For Schmidt, that is an entirely realistic prospect. "Believe me, these Chinese are good," he told his Washington audience.

China intends on setting the world's industrial standards in the near future. No country spends more today on research — even the USA lags behind the Chinese. According to MERICS, 2.1 percent of China's GDP (more than $230 billion) went into research and development in 2016, compared with 2.5 percent in 2020.

But even China will not achieve all it sets out to, says Ives.

"The aspiration to automate and digitize the entire Chinese economy is very, very ambitious," she says. "Many factories in China may be still operating at Industry 2.0 levels. They will not be able to source technology for smart manufacturing so there is still a discrepancy between what the government wants and what is possible at the local level."