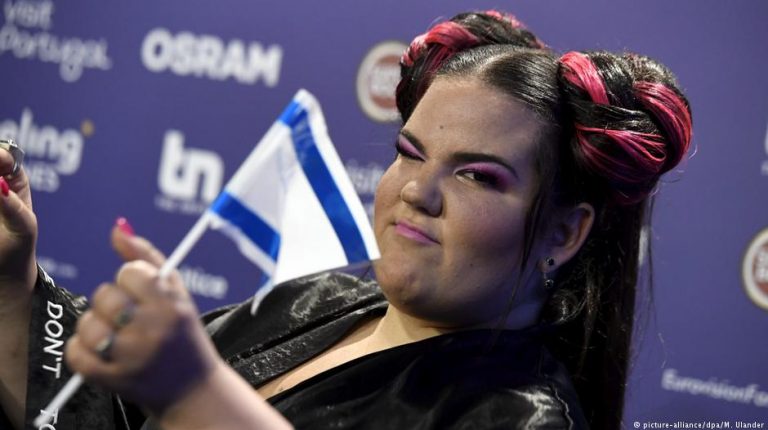 The 25-year-old singer is a phenomenon, and not only on stage. When she showed up for Eurovision's "blue carpet" event for the press and fans last week, she didn't simply saunter by, occasionally stopping to pose for photographers; she waltzed down the carpet in a pompous bridal gown and veil. She pirouetted, danced and spoke to anyone and everyone.

Not content with the off-the-rack options in her size, Netta has her clothes tailor-made by designers. There are very few photos on her Instagram account that show her without crazy make-up, extreme hairdos or fancy costumes.

For weeks, Netta has been a hot contender to win this year's Eurovision competition. Fans celebrate her unequivocal stance on the #MeToo debate, and the music video for her Eurovision entry "Toy" has been clicked more than 23 million times on YouTube.

The chorus line is simple: "I'm not your toy, you stupid boy." The song is a message to chauvinist men and an act of liberation, not just for women in general but for Netta personally. She says she was always teased, and now finally she isn't the underdog, but tops the list of favorites.

"I do what my heart tells me," she says, adding that she overcomes limitations and firmly believes that is how things must be tackled.

From newcomer to Eurovision star

Music is her life. The 25-year-old sang in a military orchestra in Israel and studied music; she is a DJ and club singer, teaches singing and has successfully tried her hand at different, more exotic musical styles with The Experiment, a singing ensemble she founded in 2016.

This year, Netta won "HaKochav HaBa," the Israeli equivalent of the "Pop Idol" reality talent show. That was her ticket to the Eurovision Song Contest.

Flamboyant artists like Netta stand out. Characters like Germany's Guildo Horn and Ukraine's Verka Serduchka have also caught people's eye in the past, simply because they don't fit the mold of traditional Eurovision contestant. So this year, it's Netta's turn. But will it be enough to secure the Eurovision crown?