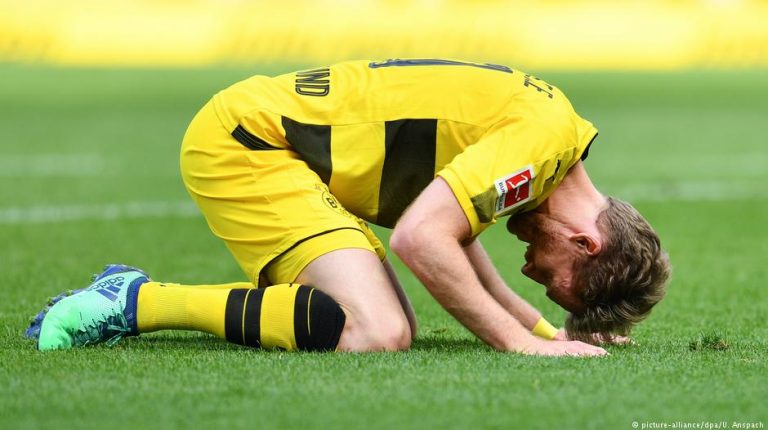 Borussia Dortmund made it hard for themselves but have qualified for the Champions League — just. A complete overhaul is in order, but they could do worse than look to Hoffenheim and Julian Nagelsmann for inspiration.When the final whistle blew in Sinsheim on the final day of the Bundesliga season, two Champions League teams were stood on the pitch. But the mood in the two camps couldn't have been more different.

While Hoffenheim's players jumped around and hugged one another and their fans spilled onto the field in celebration, Borussia Dortmund's players slowly trudged off towards the away end to applaud their travelling supporters.

After finishing fourth last season and losing to Liverpool in the qualification round, Hoffenheim's 3-1 win saw them leapfrog Dortmund into third, securing automatic qualification to the Champions League for the first time in the club's history.

Just under an hour later, Peter Stöger confirmed in his post-match press conference what had been suspected by many for a long time – that he would not be in charge of Borussia Dortmund next season.

"It's a decision we reached together some time ago. A new impulse with a new coach will do the club good." Whoever his successor is – and there are strong suggestions that it will be former Borussia Mönchengladbach coach Lucien Favre – it can't do the club any worse.

"I'm happy that we've achieved our aim," added Stöger. They did. Just. But Borussia Dortmund had done everything in their power to drop into the Europa League, not just over the previous 90 minutes, but over the last 34 games. In the end, two late Hannover goals in Leverkusen ensured that they finished fourth by three goals.

'A lot has to change'

"Relief is the right word," said CEO Hans-Joachim Watzke. "But we're certainly not satisfied with what we've achieved this season. A lot of things have to change."

"We've had so many problems to deal with this season, enough problems for three seasons," added sporting director Michael Zorc. "We'll definitely be making repairs in quite a few areas."

From a purely personnel point of view, Dortmund need a long-term replacement for goal-scorers Pierre-Emerick Aubameyang and Michy Batshuayi, plus a new defense.

The expected arrival of Augsburg's Marwin Hitz should serve as a warning to current goalkeeper Roman Bürki, whose error led to Andrej Kramaric's first-half opener, but lapses of discipline within the squad also need to be addressed, as does the apparent lack of a winning mentality.

If Dortmund's qualification for the Champions League was underwhelming, Hoffenheim's was nothing but miraculous given their poor first half of the season. "It's unbelievable that we've come third," said an emotional Julian Nagelsmann. "I've got tears in my eyes."

In a short space of time, Nagelsmann and Hoffenheim have managed to achieve in six months what a succession of Dortmund coaches have not been able to over a number of years.

Speaking in the Süddeutsche Zeitung this weekend, Watzke complained with some justification that Dortmund had been severely weakened by high-profile departures in recent years. Christian Pulisic could be next, if reports are to be believed.

This season, Hoffenheim have suffered a similar fate with Sebastian Rudy, Niklas Süle and Sandro Wagner all heading to Munich. But, aided by some smart transfer business which brought strikers Mark Uth and Serge Gnabry to Sinsheim, Nagelsmann has stuck to his principals and rebuilt.

The 30-year-old was drenched in beer by his jubilant players at his post-match press conference and thoroughly deserves his shot at the Champions League.

As for Borussia Dortmund, a synonym for tradition and identity in German football, they now need to find their identity again. Ironically, they could do worse than look to Hoffenheim.