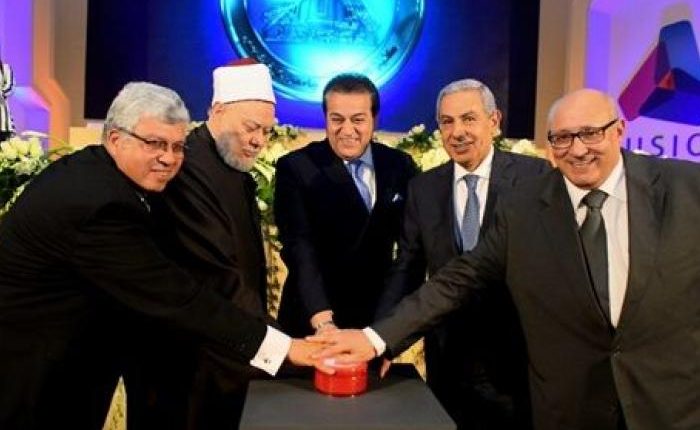 Minister of Higher Education and Scientific Research Khaled Abdel Ghafar, and Minister of Trade and Industry Tarek Kabil inaugurated on Saturday evening the FUSION initiative, which aims to develop Egyptian industry and qualify a new generation of creative graduates and entrepreneurs to advance the Egyptian economy.

FUSION is an initiative launched by the Faculty of Engineering at Ain Shams University to establish a new scientific city on an area of 20 feddans in the city of Obour, at an initial cost of EGP 12bn over three stages.

Kabil said that the city will be named Technology and Innovation Oasis, and will include a large group of laboratories and advanced training centres.

He added that the cost of the project’s first phase will be EGP 1.5bn.

Kabil said in a statement on Sunday that the initiative is being co-funded by Tahya Misr Fund and a number of businesspersons who are members of the Federation of Egyptian Industries (FEI).

The minister pointed out that this initiative comes within the framework of enhancing the benefit of the outputs of scientific research and innovation in meeting the needs of different industrial sectors and improving their competitiveness, because of its great impact on the advancement of the national economy.

On the other hand, the minister of trade and industry and the minister of higher education and scientific research witnessed, during the inauguration celebration, the signing of a number of cooperation protocols between the Faculty of Engineering at Ain Shams University and a number of development partners, which include the Tahya Misr Fund, the FEI, Egyptian Junior Business Association, and Al Ahly for Real Estate Development.

Earlier this month, Abdel Ghafar said that Egypt will establish a new educational city for science and innovation at the New Administrative Capital, part of which will be dedicated to the establishment of branches of foreign universities inside Egypt.

Keeping up with Germany’s endangered bats