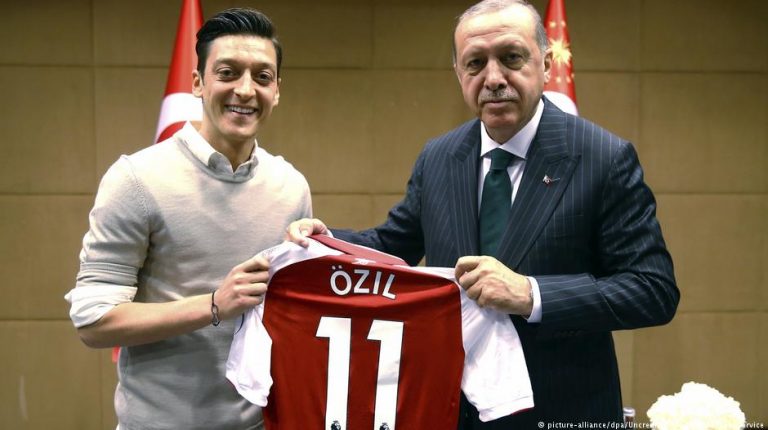 Germany players Mesut Özil and Ilkay Gündogan have been criticized for meeting with Turkish President Recep Tayyip Erdogan. Both are of Turkish heritage, but chose to represent Germany in international football.The Premier League stars, who were joined by a third player, Everton striker Cenk Tosun, met with Turkish President Recep Tayyip Erdogan at London's Four Seasons hotel on Sunday. President Erdogan, who is up for re-election on June 24, is in the British capital for a three-day state visit, where he is to be received by Queen Elizabeth II and meet with Prime Minister Teresa May on Tuesday,

Each player presented Erdogan with a football jersey from his respective club, before posing for a picture with the president. Gündogan's Manchester City shirt was also inscribed with the personal message: "With great repsect for my president."

While the added sentiment attached to Gündogan's shirt is significant, Özil’s presence seems particularly surprising. He told the German national daily Süddeutschen Zeitung, in a 2017 interview, that he generally refrains from commenting on political matters. "I don't speak about politics," he said at the time.

The German internationals were criticized on Monday by Reinhard Grindel, president of the German football association (DFB).

"Of course the DFB respects the special situation of players from migrant backgrounds," he said. "But football and the DFB stand for values that are not sufficiently respected by Mr. Erdogan. It's not good that our players are letting themselves be exploited for the good of his (election) campaign. The actions of these players have not helped the integration efforts of the DFB."

After the news broke, some took to Twitter to voice their disapproval with the meeting. In the four years since Erdogan, became president, Turkey has frequently come under fire for alleged human rights violations, as well as crackdowns on the press and social media. During that time, more journalists have been jailed under his regime than in any other country, and the former longtime prime minister has blocked Wikipedia, Facebook, Twitter and YouTube at various times. Many German media outlets have been particualrly critical of Erdogan's regime.

Although both were born in the western Germany city of Gelsenkirchen and chose to represent Germany internationally, both Özil and Gündogan are of Turkish heritage. Everton striker Tosun was also born in Germany, but he chose to play for Turkey.

The timing is far from ideal, given that German national team coach Jogi Löw is set to announce his preliminary squad for the upcoming World Cup on Tuesday. Both Özil and Gündogan are expected to make the squad, although as a result of Sunday's meeting, some fans have called for their exclusion.