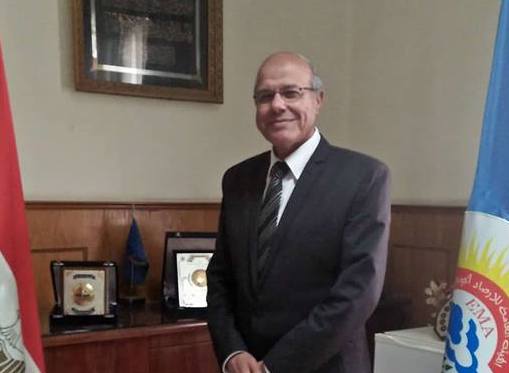 Egyptians may not have ever been as interested in the weather as they are now, and perhaps this attention has turned into a global fever.

This is due to several reasons, the first of which is the severe climate change that has affected all countries of the world, including an onslaught of hurricanes, floods, droughts, and other natural disasters, and the second because of the spread of talk about global warming and its effects, which could eventually cause the full disappearance of cities and many beaches around the world.

The danger is not far from us—there are many expectations that large parts of Alexandria and the entirety of Kafr El-Sheikh will drown, and the impact could even reach all of the Nile Delta.

The body in charge of the weather in Egypt is the Egyptian Meteorological Authority (EMA) and its current head is Ahmed Abdel Aal, whom Daily News Egypt met to learn about the story of the EMA and its role. He explained these changes to us and advised citizens.

The transcript for the interview is below, lightly edited for clarity.

When was the EMA established, what is its mission, and who supervises it?

The EMA was established by royal decree in 1892, which named it the Bureau of Meteorology. In 1971, it was turned into an authority responsible for protecting all public and private property from climatic factors. After the development of air traffic, there has come to be a meteorological station in each airport. The EMA now is affiliated with the Ministry of Civil Aviation through 176 stations that issue meteorological observations every hour that are collected and sent to all agencies, ministries, and governorates.

Where does a specialist in meteorology graduate from? Is there a shortage of specialists?

There is no shortage of specialists in our department. There is a department in Cairo University and another in Al-Azhar named astronomy and meteorology. The departments’ graduates are trained for two years to be ready for work. Both department cover our needs of specialists, so we do not need more of them.

Were you surprised by the recent disturbances of rain, wind, and heat?

Not at all. Even though these fluctuations are strange to happen during the spring season, and especially the rain, we issued the data. On the issue of New Cairo, all officials said that the EMA warned 48 hours before it happened, and we sent the data to all the concerned authorities.

What is the reason for the unexpected climate change?

The spring, which ends on 21 June, is, by its nature, the season of abrupt and sharp climatic changes. This year, the events were different, including the heavy rain and the storms as well as the lightning and thunder instead of the “khamsin wind”.

Is the climate of Egypt still hot and dry in the summer and mild and rainy in winter?

We suspect that the climate of Egypt is still as we learned, but this cannot be confirmed until after study. At present, climate scientists at the EMA are working on studying the climate of Egypt during the last 50 years to find out the times of change and whether the climate has changed completely or not. If proven to have changed, we will address the Ministry of Education to change the curriculum.

The month of Ramadan will fall entirely in the spring, and it will not be in the summer. This is a good indicator. For now, we can expect, unconfirmed still, moderate weather at the beginning of the month, less moderate in the middle, and hot towards the end.

Explain the global warming phenomenon that the world warns of.

The origin of the story is that the world used the oil and coal derivatives in a large and unnatural way, which resulted in the release of gases called greenhouse gases, consisting of carbon monoxide, carbon dioxide, and methane. It is known that the Earth absorbs heat then releases it in the night to outer space. These gases act to form a cover of pollutants. This cover prevents the heat from going back into space, causing the Earth’s climate to heat up. This is the concept of global warming. This is a chronic phenomenon and a problem that has been extended for decades. And it is time to address it.

What are the implications of this phenomenon?

The heat should be released to outer space. And the gases should also be able to climb out of the atmosphere, but the cover prevents that from happening. This heat creates a state of imbalance in the climate that reflects differently in different regions. Some places incur floods, others droughts, while some suffer from earthquakes, and more see windstorms and blizzards. All of these events are caused by global warming. This goes beyond weather, as it poses threats to health, economies, food and water resources, and maybe even life on Earth.

What did the world do to confront this phenomenon quickly?

The Climate Summit was held in 2014, organised by the United Nations, in Morocco with the participation of a large number of countries in the world. It ended with agreements to curb carbon emissions, mobilise funds, and market to face the problem, put a price on carbon, and commit to keep the Earth’s temperature increase below two degrees Celsius. The recommendations of the conference should be implemented to save the Earth.

Why did the United States withdraw from the convention and its impact?

Because the most important items agreed upon is the provision of $125bn for the countries affected by climate change. America will pay a large part of these funds. And therefore, if America does not pay these amounts, the convention will be impacted. US President Donald Trump does not want to abide by the convention because he imagines that if he adheres to it, it will impact industry and technology as the US will be committed to limiting global warming, which will reduce the scale of industry.

Does Egypt have a role in these agreements?


Egypt plays a major role, representing the whole African continent, which has 57 countries out of the 192 participating countries, which means about one-quarter of the participating countries. Thus, Egypt’s role in this agreement is strong. President Abdel Fattah Al-Sisi’s call during the previous climate summit to rely on new and renewable energy resources, if implemented, the world will be saved from this threatening phenomenon.

Are the expectations of the drowning of the Nile Delta, Alexandria’s beaches, and Kafr El-Sheikh real?

These expectations are very likely, though the Egyptian government is making great efforts to save the Delta from this fate. The Egyptian Shore Protection Authority (SPA) is doing its best to confront climate change and we can say that Egypt succeeded in facing the phenomenon as far as possible. I have prepared a study to fill up about one mile of the beaches in Alexandria and Delta and I presented the idea to the minister of irrigation. I can say that the citizens do not feel any change in the beaches because of the government’s efforts.

How can we contribute to resolving this crisis and reducing global warming?

In my opinion, the best solution lies in relying on new and renewable energy, especially solar energy. Egypt has at least 15 hours of daylight every day. If we use solar energy to generate electricity, we will save oil reserves. It will also ensure a clean and cheap energy source. Although the solar panels are expensive, they will cover their costs within a short period of time. In addition, we can issue a new law to light up all new cities with solar-powered electricity.
A committee from the EMA will prepare a book on solar radiation in Egypt, which will identify the most places that receive high solar radiation. The book will be used in solar power plants and will be a reference for anyone who wants to build a solar station.

Has the authority witnessed any development recently and does it receive any support from the state?

The development of the EMA continues all the time, including the training of staff internally and externally in China, Japan, the US, and France, which makes the meteorological service progress.

In terms of infrastructure, the EMA started to use solar energy and signed an EGP 182m deal with the armed forces to bring three weather radars, a giant computer, and 30 automatic stations. This equipment are modern and the EMA will not need any development for the coming 20 years.

Will the state criminalise talking about the weather?

Not exactly, but there is a draft law that will limit the authority to issue aerial forecasts or atmosphere to the EMA, as is the case in all countries because the weather is a matter of national security. No one but the EMA should have the right to speak or issue forecasts on the weather. Some media pages use terms that have never been used by the EMA and we warn the citizens that the only reliable sources for weather news are Egyptian television, radio, newspapers, or calling us.

Is there enough attention and awareness among citizens about the importance of weather reports?

Yes, there is a high level of interest among Egyptians about the atmosphere and climate change, and this reflects the development of the people, especially with the recent changes in the weather.

What is the EMA’s weather forecast for Egypt in the coming period?

We are expecting dusty “khamsin” winds that started last Thursday accompanied by a sudden rise in temperature. We warn those suffering respiratory diseases, allergies, or eye disorders to avoid open areas and to be alert in the coming period.