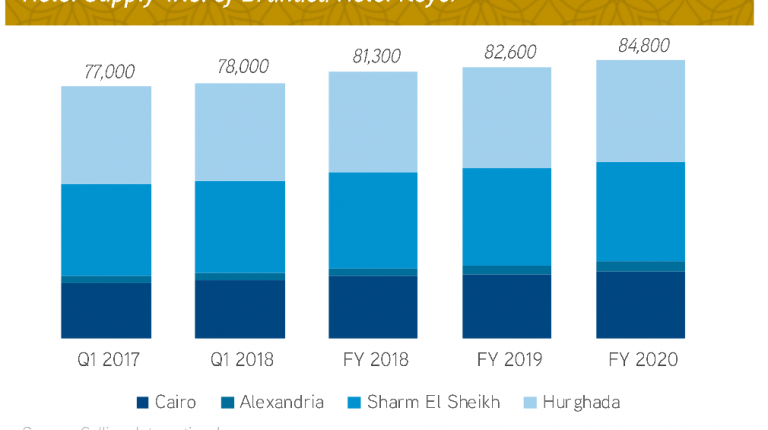 In the first quarter of 2018, Sharm El-Sheikh hotels were on the path of recovery, achieving a year-over-year improvement of 44% in occupancy and 37% in average daily rates (ADR), according to Colliers International’s The MENA Quarterly Review Q1 2018 report.

Furthermore, the report indicates that in Q1, hotel room supply grew by 900 keys compared to Q1 2017, with the growth occurring in the Cairo market. The report cites Cairo as the sole driver of growth in Egypt’s hotel supply with the opening of the Sheraton Hotel Cairo and Casino and the Hilton Heliopolis in Q3 2017 and Q1 2018 respectively. The openings contributed to the 5% growth in supply for Cairo seen in Q1 2018 over the previous year.

According to the report, operators such as Hilton Worldwide, Egyptian local operator Travco, and the UAE-based Emaar have already made announcements for new projects in Egypt, as prospects improve in the tourism sector.

The new projects will contribute 7,000 additional rooms that are expected to enter the market by the end of fiscal year (FY) 2020.

The report forecast that Sharm El-Sheikh is expected to witness 23% growth in occupancy levels by FY 2018, backed by the strong Q1 2018 results, which indicate a positive performance in the Egyptian market from its most recent low in 2016.

Moreover, Colliers’ report concludes that the current period of stability has also encouraged Russia and Germany, two key source markets, to reopen direct flights to Cairo and Sharm El-Sheikh. If this trend continues, it is expected to further increase the demand on the country’s prominent tourist destinations.