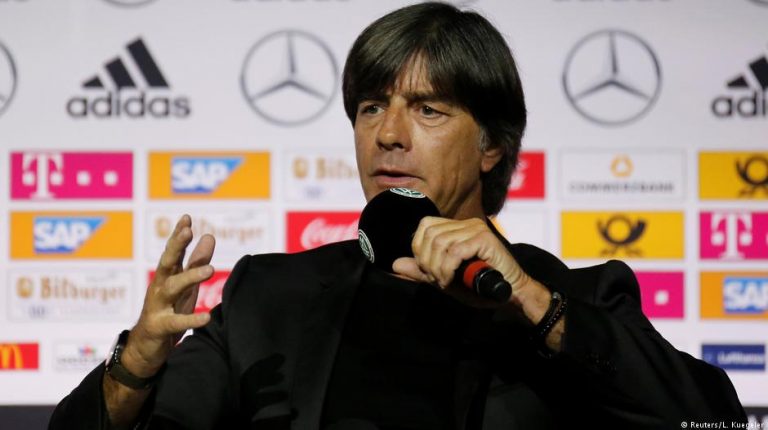 Germany head coach Joachim Löw has named his preliminary squad for the World Cup, which kicks off in Russia next month. The DFB has extended the head coach’s contract through the World Cup in 2022.Head coach Joachim Löw named a squad of 27 players, who will accompany him to the national team’s training camp in Austria next week. This means he will have to cut four players from the roster before departing for the tournament.

Aside from the omission of Borussia Dortmund midfielder Mario Götze, who scored the winner in Germany’s 2014 triumph, there were no major surprises in the squad, which was announced during a press event at the German Football Museum in Dortmund on Tuesday. However, a few questions were answered. Some had wondered whether first-choice goalkeeper Manuel Neuer would be invited, given the fact that he hasn’t played a competitive match since September due to his foot injury. However, Neuer’s name is on the list, one of four goalkeepers who will travel to Austria.

Löw said that Neuer would get some much-needed playing time in two friendlies against Germany’s under-20 team during the training camp in Austria.

“At the moment, things are looking really good (for Neuer),” the coach said.

There had also been speculation that Bayern Munich striker Sandro Wagner could make the team, but the nod has gone instead to the in-form Freiburg striker Nils Petersen. Löw said he had high expectations for Petersen, who scored 15 goals for Freiburg this past season.

Some had called for two of Germany’s players, Mesut Özil and Ilkay Gündogan, to be left out following a meeting with Turkish President Recep Tayyip Erdogan in London on the weekend. However, both were included in the squad.

The two German-born players of Turkish heritage have been widely criticized for Sunday’s meeting, which came while Erdogan is campaigning to be elected for a second term as president. Both presented Erdogan with a jersey and Gündogan has come in for particular criticism for the inscription: “With respect for my president” written on the one he gave the Turkish leader.

“Football and the DFB stand for values that are not sufficiently respected by Mr. Erdogan,” Grindel said. “Our players have not helped our integration work.”

Gundogan later issued a statement saying that he had not meant to make a political statement or get involved in an election campaign.

From Grindel’s comments prior to the announcement of the squad on Tuesday, it was clear that neither Erdogan nor Özil would be left out of the squad due to their actions. Grindel said that “people make mistakes but we should deal with it in proportion.”

For his part, coach Löw described Sunday’s meeting between the players as unfortunate, but he also said that the idea of dropping them over the incident had never crossed his mind.

The extension of Joachim Löw’s contract came as little surprise, as Grindel, had previously said that the coach would remain in charge of the national team, even if Germany were eliminated in the quarterfinals of the upcoming World Cup. The contracts of assistant coach Thomas Schneider and goalkeeper coach have also been extended until 2022.

The contract of DFB director and national team general manager Oliver Bierhoff has been extended until 2024.