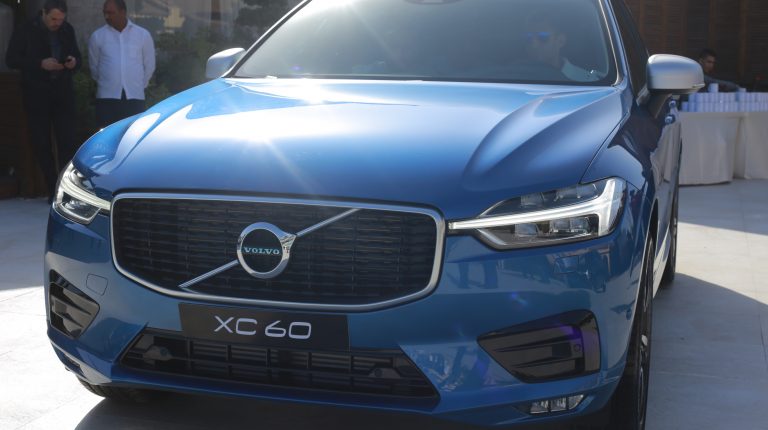 The Volvo XC60 is a mid-size multi-purpose sporty car, made entirely in Sweden, and was officially presented to the public at the 2017 Geneva International Motor Show. The XC60 is the younger sister of the XC90, combining beauty and strength like its sibling. The all-new XC60 was released on the Egyptian market almost a month ago by Ezz Elarab Automotive Group, the exclusive agent for the Swedish Volvo Car Group in Egypt.

The XC60 is the highest-selling car among Volvo’s world-class cars. It is available in Egypt in two categories: the Momentum costs EGP 190,000 and the Inscription costs EGP 1.39m. A third category is expected to be launched soon.

Daily News Egypt took the T5 Momentum XC60 for a test drive and reviewed its performance on the road. The Momentum means power, excitement, and enthusiasm, as the vehicle is equipped with all a driver might need.

When DNE received the car from the company’s headquarters in the Abu Rawash area, Ahmed Al Shami, Volvo sales manager at Ezz Elarab Group, told the reporters that Ezz Elarab intends to increase the sales of this category by 150% compared to last year, benefiting from the competitive price of the car among its category.

The XC60 is a beautiful combination of a powerful SUV and a luxury car with sophisticated materials and cutting-edge technology.

The XC60 has been designed to give the car a strong and fierce impression. The car features a long and wide hood. The grille is connected with smart LED headlights, designed in the shape of a bull hammer. The car’s sides are characterised by smooth lines and all the parts of the external structure are covered with silver chrome. The rear comes with a new attractive design that is very similar to the XC90 with minor modifications.

The engine is connected to an eight-speed automatic transmission and adopts an AWD system with a maximum speed of 260 km/h. It also supports a dynamic driving mode.

The XC60 comes with four different driving modes. Eco mode has low gasoline consumption, as it turns off the engine when the car stops for a long time, for example at traffic lights. Comfort mode is suitable for daily use within a city or slow driving on highways. Off Road mode is suitable for rough terrains. All these modes give drivers the feeling that they have several cars in one car. Finally, the Dynamic mode offers the maximum torque and once it is initiated, a driver may feel they are in a “savage” car, completely different from other modes.

Staying in a car for a long time is very boring and exhausting, but things are quite different inside the XC60. This car is definitely the best for travelling. The cabin comes with several features that make drivers comfortable. The car has a large panoramic sunroof that allows sufficient lighting during the day, with an amazing view of the sky at night.

The cabin’s storage is large, with two cupholders, large door pockets in the front, two cupholders, and smaller door pockets in the back. The centre console storage area under the centre armrest is also of a decent size. The XC60’s cabin is spacious, and there’s plenty of legroom in the back seats with good headroom, even with the panoramic sunroof.

The XC60’s nine-inch touch screen helps users access all the car’s features, including air-conditioning and the engine, reducing buttons on the dashboard and the centre console.

The steering wheel features a number of buttons that allow the driver to control music playback, dial and answer the phone, and control the autopilot system very easily.

The XC60 and XC90 SUVs are based on Volvo’s Scalable Product Architecture (SPA) platform. The new platform will ensure that the Volvo XC60 gets a host of features from its elder siblings. It gives flexibility, smoothness, and very high driving control through its shock absorber system.

Volvo has focused on safety in this model, as it has done in all its cars, and has added a new safety system called Oncoming Lane Mitigation, using steer assist to help mitigate head-on collisions, while Volvo’s Blind Spot Indication System (BLIS) can actively guide the SUV out of harm’s way and back into its lane if it detects that it is about to collide with another vehicle when changing lanes.

Volvo’s autopilot also provides assistance to drivers when turning, speeding, and using brakes on well-defined roads at speeds up to 130 km/h. Volvo is quick to make it clear this is just for assistance and can in no way be expected to drive the car all on its own.

The car comes with 360-degree cameras that surround all sides of the car, giving you a complete view of the exterior to avoid hitting other vehicles and to leave a suitable distance between the XC60 and other vehicles. There are two cameras on the doors, one in the front, and another in the back, but these cameras can be annoying in big cities like Cairo as everyone drives close to other traffic lanes and the car would not stop warning you.

The car also comes with the Anti-Lock Braking System (ABS), which can stop the car completely if it senses a body in front of it, while riding at a speed less than 60 km/h. the ABS also avoids the locking up of wheels, and hence, protects the rider and pillion in case of an emergency or panic braking.

The XC60 has strong rivals, including the Mercedes GLC Class, the BMW X3, the Audi Q5, the Porsche Macan, and the Jeep Grand Cherokee. The Egyptian market will see fierce competition among these categories in the coming period, especially between the XC60, X3, and Grand Cherokee.

The XC60 was named the 2018 Car of the Year at the Geneva show. It also won the Best New Car Award for 2017 by Auto Express, and the Best Luxury Car in 2018 by the Auto Guide based on public vote.