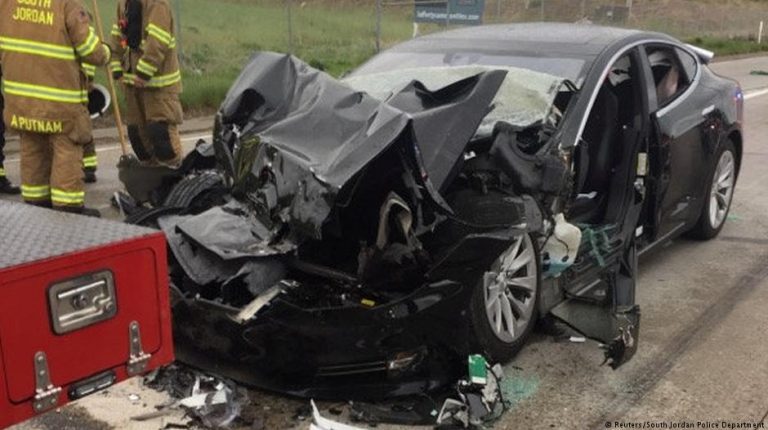 Swiss police are investigating the death of a man after his Tesla car crashed and burst into flames last week. The case adds to claims e-vehicle car batteries may be a safety concern after similar incidents in the US.A 48-year-old German driver died last Thursday when his car hit a barrier on a highway in the southern Swiss canton of Ticino, before flipping over and bursting into flames.

Local police said that the driver, from Baden-Württemberg, lost control of the car for unknown reasons.

The fire department in the nearby Swiss town of Bellinzona later on Thursday posted on its Facebook page: “The violent impact to lithium-ion batteries could probably have caused a phenomenon called ‘thermal runaway,’ that is a rapid and unstoppable increase in temperature,” citing fire safety expert Guido Zaccarelli.

A meter-high (3.3-foot) fire flame was reportedly visible in the deleted post, which the fire department later withdrew without saying why.

Lithium-ion batteries can have a sudden and unstoppable increase in temperature in a chain reaction that leads to the complete destruction of the batteries and the car, fire safety expert Guido Zaccarelli wrote in an article quoted in the firefighters’ deleted post.

There have been problems with lithium-ion batteries used in smartphones, notebooks and Boeing 787s.

Elon Musk, boss of the e-car firm, has said a fire in a Tesla electric vehicle was far less likely than in regular cars.

Tesla wrote on the company website that its battery packs “are designed so that in the rare circumstance a fire occurs, it spreads slowly so that occupants have plenty of time to get out of the car […] Serious crashes […] can result in fire regardless of the type of car and Tesla’s billions of miles of actual driving data shows that a gas car in the US is five times more likely to experience a fire than a Tesla vehicle.”

According to the National Fire Prevention Association (NFPA), in 2015 there were 174,000 gasoline fires in vehicles in the US, with 445 people killed and 1,550 injured.

Tesla, whose future depends to a large extent on the success of its new Model 3 car, could do without any more negative PR. The company has continued to operate at a loss, and delays in rolling out the new model cost the firm an estimated $745.3 million (€621.3 million) in the first quarter of 2018 alone.

Tesla said it was working to gather all the facts about the Swiss case and was fully cooperating with the local authorities.

One is into a Model S that caught fire after crashing into a wall in Florida, when two 18-year-olds were trapped and died in the flames.

Police said speed was a factor, but also that the car burst into flames shortly after the accident.

Tesla said in a statement: “We have not yet been able to retrieve the logs from the vehicle, but everything we have seen thus far indicates a very high speed collision and that autopilot was not engaged.”

The NTSB said autopilot was not part of its investigation’s focus.

A probe is underway into a fire in a Tesla Model X SUV that crashed on a freeway near Mountain View, California, on March 23. In that case, six days after the crash, the car’s high-voltage lithium-ion battery reportedly re-ignited while sitting in a tow yard.