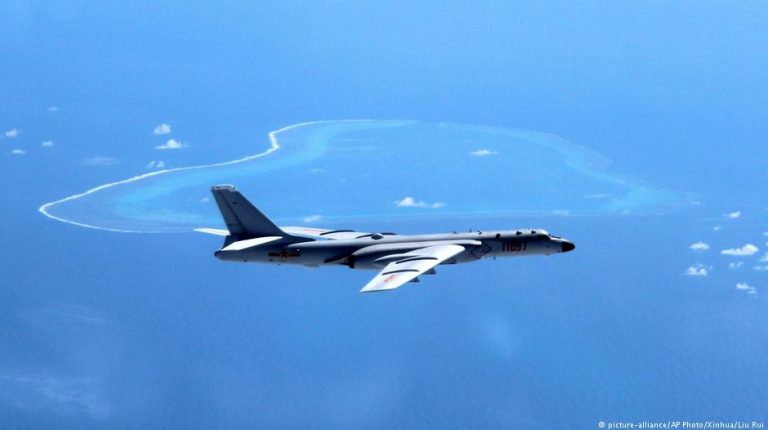 The Chinese air force has for the first time landed several bombers on a South China Sea island. The move could fuel tension in the region amid concern that Beijing is expanding its military might to the disputed waters.The China Daily state newspaper reported Friday that several bombers, including the long-range, nuclear strike-capable H-6K, conducted takeoff and landing drills at an unidentified island airfield in the South China Sea.

Read more: South China Sea — what you need to know

A defense ministry statement said that the exercise was conducted on an island reef, but did not specify the area, saying only that it took place at a “southern sea area.”

The ministry also said that several H-6Ks carried out stimulated strikes against sea targets during the drill.

Wang Mingliang, a military expert, was quoted in the statement as saying that the exercise in the South China Sea will help the Chinese air force “strengthen its combat capability to deal with maritime security threats.”

The Washington-based Asia Maritime Transparency Initiative identified the exercise location as Woody Island, China’s largest base in the Paracel Islands.

“I believe this is the first time a bomber has landed in the South China Sea,” Bonneih Glaser, a China expert at the Center for Strategic and International Studies, tweeted.

How powerful is China’s military?

The tensions in the South China Sea center on Beijing claiming virtually all of the sea to be its territorial waters, claims that have been vigorously disputed by Vietnam, the Philippines, Malaysia, Taiwan and Brunei.

The Philippines had been the most vigorous critic of Chinese territorial claims, but Philippine President Rodrigo Duterte dialed back his country’s objections, leaving Vietnam as the leading critic.

The US has accused China of militarizing the region and changing its geography to strengthen its claims across the South China Sea. Washington believes China will use the islands and its military presence on them to deny access to strategic sea routes.

In the Paracel islands, a new helipad, wind turbines and large radar towers had been built. The radar towers on Triton Island could be used in China’s disputes with Vietnam and with the US over freedom of navigation operations, which the US navy has used to back its perceived right to free passage in international waters.

Earlier this month, China’s first home-built aircraft carrier left dock in the northeastern port of Dalian to begin sea trials of its engine, propulsion and navigation systems. The trials represent a landmark in Beijing’s extensive project to modernize its navy as it continues to build up its presence in the disputed South China Sea and around Taiwan, which it sees as its own territory.