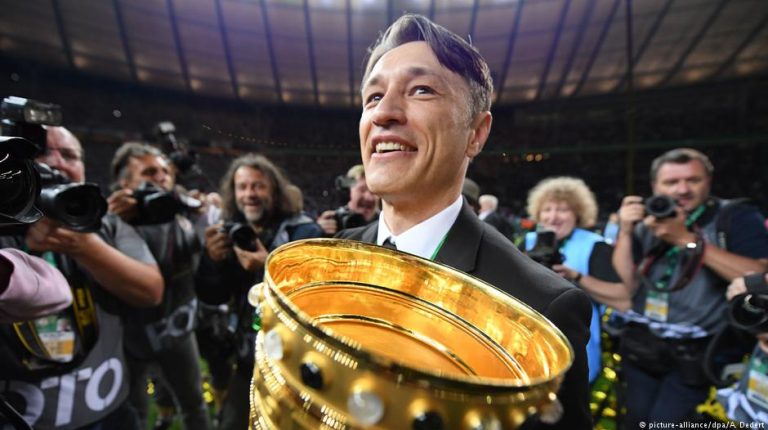 Frankfurt swept to a rousing German Cup win over favorites Bayern. A tactical tweak and some words of wisdom from coach Niko Kovac inspired the shock victory, something Bayern can take comfort in.Even for a club as storied as Bayern Munich, there can be few occasions when letting a trophy slip out of reach has come with such an emphatic and meaningful consolation.

While it’s not something likely to provide much comfort to Jupp Heynckes, who finishes his storied 39-year coaching career with a loss, the rest of those dressed in red in Berlin – both in the stands and on the pitch – can at least reflect that their future looks bright.

While the exceptional Ante Rebic stole the show on the pitch, playing an equally critical role in a clinical, rousing and refreshingly unxpected 3-1 win for the Eagles, it was Niko Kovac who delivered a tactical masterclass from the sidelines to claim the first major title of his coaching career.

The Croatian’s imminent move to Bayern caused bad blood between these two clubs and his appointment came as a shock to many. Despite the acrimony caused by his departure, Frankfurt are still very much Kovac’s team, for this Saturday at least. As Kevin-Prince Boateng, one of several Frankfurt men revitalised by Kovac, put it: “Niko couldn’t have left on a better note.”

Like the travelling Eagles faithful, who all took their seats early whipping up a racket ahead of kick off, Frankfurt and Kovac had long planned for this day. Content to allow Bayern the ball early on, they swooped in the 11th minute when Rebic picked James Rodriguez’ pocket and fired Kevin-Prince Boateng’s through ball past Sven Ulreich.

Though initially ruffled, Bayern soon began to draw on their vast big game experience and continued to dominate the ball. But Frankfurt gave no quarter. Boateng, a player once regarded as a wayward luxury, sprinted across the pitch to close down fullbacks, white shirts flew in to tackles and Kovac’s men used their rare glimpses of the ball smartly, fashioning a pair of decent openings before the break.

Their coach was equally active, pacing a small square around the top left corner of his technical area while the man he’ll replace stayed largely impassive in his dugout, positioned in the vast hinterland between the stands and the pitch. A stage set for the winners to lift their prize lay just behind Bayern’s present and future bosses.

After the smoke cleared from the halftime flares, and as the sun dropped behind the stand where their fans sat, Bayern began to feel that stage was theirs to strut on, and Robert Lewandowski’s leveller further convinced them of their fate.

But Kovac’s ragtag collection of players assembled from across the globe have heart. And, more than that, they have intelligence, skill and a very astute coach.

“I always knew what this team was capable of,” said an emotional Kovac after the win but before a surprise beer shower from his players in the post match press conference. “Before the game we constantly told the players that it was possible.”

It couldn’t have been clearer that they believed him. Makoto Hasebe was exceptional at the base of midfield, Danny da Costa made Franck Ribery look his age and Boateng looked like the player he’s always promised to be.

But, aside from the belief he’s instilled in his men, Kovac also showed the kind of in-game tactical awareness that can turn even the toughest of tests. Despite their unlikely lead, he tinkered at the break, moving Rebic to a more central role. Kovac’s compatriot was electric, constantly troubling Niklas Süle and Mats Hummels with his direct, pacy and decisive dribbling and his intuitive relationship with Boateng.

The calculated gamble was rewarded eight minutes from time, when Rebic again outpaced Bayern’s center backs to lift the ball over the onrushing Ulreich. It’s the kind of decisive move clubs like Bayern require in the big moments.

“He proved what he is capable of by winning this title,” said the Bayern keeper post-match. “We’re excited to see what he can do as FC Bayern coach.”

But for now, Kovac belongs to Frankfurt. He rose as one with his bench and the fans as the players headed wildly towards them following Rebic’s second. For a minute, chaos reigned as VAR chacked the goal but a delayed second wave of euphoria followed. Amid it all, Kovac stepped on to the field, almost unnoticed, to brief Boateng on how the Eagles could see out the final few minutes.

If Kovac suggested his troops could hit the champions on the counter while Ulreich was at the wrong end of the pitch, Bayern have themselves an even better coach than they thought.

As Mijat Gacinovic latched on to a cleared corner, leaving Hummels trailing in his wake before tapping home, the aborted pitch invasion that followed the second goal gave way to the real thing. The Frankfurt bench, Kovac included, spilled on the turf before their fans bounded across the chasm between their seats and the pitch to join them, followed swiftly by lines of riot police. No-one stopped to wait for the whistle.

So the stage belonged to Frankfurt. Kovac allowed his players to bask in the limelight before taking his turn. A few of the remaining Bayern fans roused themselves from shock long enough to applaud. For them, it’s all about next season. But for Frankfurt, and Niko Kovac, it’s all about tonight.