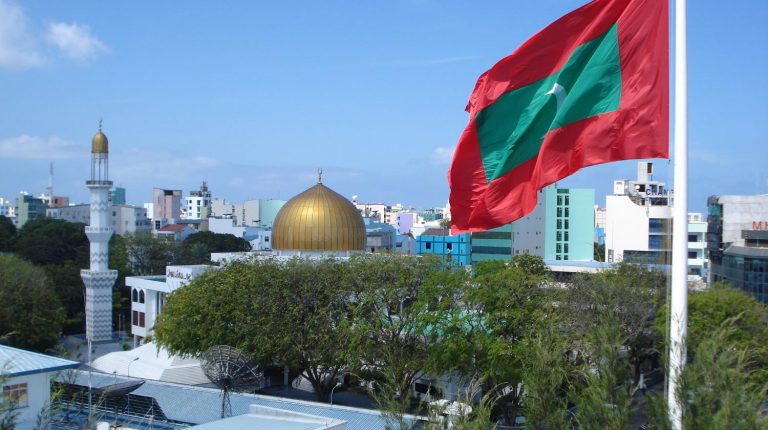 The Maldives is a group of coral islands in the Indian Ocean. It is known for its beaches, blue lagoons, and extensive reefs. The capital is Malé, and its official language is Divehi. All its population are Muslims and most of them have Indian and Sri Lankan roots.

The people of the Maldives are devout and keen on Islamic etiquette. Most of the women there wear hijab—a headscarf to cover their head and hair—and restaurants are closed during the daytime in Ramadan. The hustle and bustle of life stop at the Iftar time. No one can eat or drink in public places during the fasting time. They flock to mosques at the time of each prayer and care very much to follow religious TV shows.

Muslims in the Maldives prepare for the holy month of Ramadan very early, starting from the month of Sha’baan (the month that precedes Ramadan).

Maldivian people spent the night before Ramadan on the coasts until the morning. They decorated mosques and hung lights in preparation for the holy month. They also do more charity during this month.

The beginning of Ramadan is usually announced by the Mufti of the Maldives, based on the visual sighting of the crescent moon by a special committee of scholars and preachers. During Ramadan, the Maldivian government decrease working hours, while companies and merchants announce great discounts for the public throughout the month.

In the Maldives, Ramadan is characterised by crowded mosques and the increase of shopping. Maldivian families and friends hold celebrations and exchange visits. They also attend sermons at mosques together.

During Ramadan, parents educate and train their children to pray, fast, and read the Qur’an. Meanwhile, mosques provide many sermons according to a schedule prepared in advance.

During the Iftar, the Maldivians held feasts in squares and streets, which are hosted by the rich and the volunteers, while many houses are decorated with lightings.

The Maldives have their own cuisine that presents many delicious dishes served throughout Ramadan, such as Garudhiya, a fish served with rice, lime, chili, and onions, and kulhi boakiba, a spicy fish cake.

The food in the Maldives is varied in a way that makes it delicious and healthy. Due to the nature of the country consisting of islands surrounded by seawater, it is natural that fish, especially tuna, become the main ingredient in the Maldivian cuisine with a mix of Arabic, Indian, Sri Lankan, and oriental influences.

Coconuts are another major part of many dishes in Maldives and can be served in grated form, as milk or as coconut oil, which is used in deep frying. Favourite fish include skipjack tuna, little tuna, yellowfin tuna, frigate tuna, bigeye scad, wahoo, and mahi-mahi.

The Maldivians were influenced by the Arab cuisine, as “Tharid” became one of the main dishes that are popular during Ramadan, especially in feasts. It consists of rice, mutton, or beef, and some types of dry bread. There are also meat or fish tannins, usually cooked in the oven and filled with flavours and spices. They are served in the Iftar as traditional dishes.

The meat and chicken dishes are only served on special occasions and holidays, while the popular dishes include fried fish, curry, and fish soup.

At the suhoor meal, some prefer to eat steamed rice with pieces of fish, while others just have syrup with yogurt, sugar, wheat, and dried fruits. Coconut is the main crop in the Maldives, besides other fruits and vegetables that are planted on some islands, hence most of the food produce are imported.