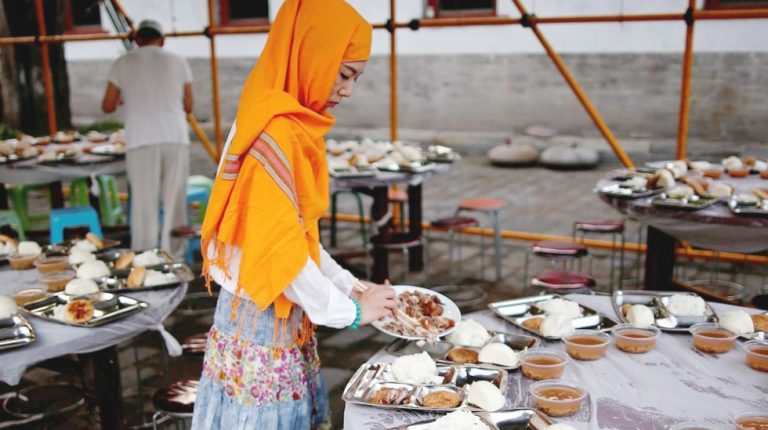 The Islamic Chinese Association in Beijing determines the beginning of Ramadan according to astronomical calculations rather seeing the crescent like Arab countries.

For the Muslims of China, Ramadan holds a very special place. Celebrations start early through cleaning houses, including even ceilings and walls, as well as decorating walls with verses from the Quran, and mosques with colours. Mosques also welcome new rugs and worshipers, as is the case in the rest of the Islamic world.

With the beginning of the fasting month, you will see that the rich in China become very generous with their money. Each Muslim tries to go to the mosque with whatever food and drinks they can in order to share them with the other worshipers.

As Ramadan starts, you will find mosques keen on opening their doors before Muslims and non-Muslims in order to introduce them to Islam.

Each year, Al-Azhar sends several preachers who are distributed across China’s Muslim cities and neighbourhoods. Niujie Mosque, which is one of the oldest mosques in Beijing that has existed for nearly a thousand years, welcomes Egyptian preachers, which makes the Muslim Chinese there very enthusiastic.

One of the most important manifestations of Ramadan is organising mass iftar meals in order to strengthen the bonds between Muslims in society.

The iftar table is usually round, with a variety of foods, with special care given to not wasting large amounts of food.

The meal in China is divided into two parts. The first includes drinking tea and eating watermelon pieces, then individuals go pray. The second part of the meal comes after praying, with the main dish being rice, along with various types of vegetables and mutton.

Experts estimate the number of Chinese dishes to be over 5,000 halal foods, such as boiled chicken, fried lamb chops, veal meat with curry, chicken, peanuts, and roast beef. In China you will notice the word “halal” on any food for Muslims, and the colour green distinguishes the stores of Muslims, compared to the colour red which is considered the main colour of the country.

The Chinese give great attention to the suhoor meal. It is considered the main meal for them. One of the reasons for this is that their fasting hours are very long, and the second is that the Chinese have a good relationship with food on regular days, as they have five meals a day.

The late period of the night includes rituals such as Tahajjud prayers and mass suhoor. The Tarawih prayer each night is concluded with a sermon, and afterwards the door is opened for questions and inquiries in order to benefit all.

As for the lanterns that are well known in Egypt and considered a main elementof Ramadan, as we find them invading our markets every year from China, they are also very popular with the Chinese during the holy month. They are among the most popular goods exported from China to the Arab and Islamic worlds. They were used in the ancient times for lighting and decorating houses and neighbourhoods, but over the time, they have become a habit and people have embraced them as symbols of Ramadan. Soon after, lanterns turned into a major trade.