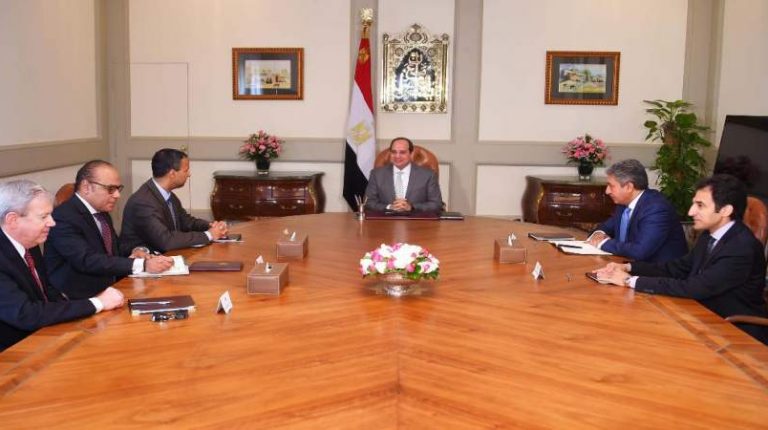 On 18 April, Al-Sisi met with Boeing’s President Marc Allen to discuss Egypt’s keenness on promoting cooperation with the Boeing Company. Attending the meeting were Minister of Civil Aviation Sherif Fathy and Bernard J Dunn, Boeing’s MENAT president, according to a previous statement from the presidency.

Dunn said that Boeing will cooperate with Egypt in another CSR activity in 2018 in collaboration with World Learning Organisation, clarifying that the project, called Curiosity Machine, “aims to introduce an interactive me focused on science, technology, engineering, and mathematics (STEM).”

Boeing implemented the Curiosity Machine programme in Doha and it was created by US-based non-profit Iridescent. It teaches STEM learning through hands-on engineering design challenges, each of which presents fundamental science or engineering concepts and asks students to use simple materials to come up with possible solutions, according to a 5 May statement from Qatar Foundation’s Pre-University Education (PUE).

“Egypt has a fair share of our CSR regional budget,” said Dunn, noting that his company collaborates with the organisations Education for Employment and Injaz Al-Arab. The company will expand their CSR activities in Egypt.

Dunn noted that Boeing and EgyptAir collaborated on a charity event to deliver food boxes to Kasr Al Aini Hospital for the third year.

“We expect the Middle East and Africa will need 3,350 commercial jets over the next 20 years which requires employing 63,000 pilots, 67,000 technicians, and 92,000 cabin crew,” said Dunn, adding that buying aeroplanes is an investment in the future as it creates jobs.

“Dubai figured out buying airplanes is an investment in the economy and other governments in the region are learning that quite well. Egypt understands how to utilise this well for the benefit of the country,” said Dunn.

The Middle East is the fourth largest market in terms of services growth behind the US, Europe, and Asia Pacific, he noted.

Meanwhile, Dunn added that his company focuses on developing environmentally friend aircraft, noting that manufacturers changed their direction towards energy efficienct aeroplanes rather than fast ones following the 9/11 attacks, which decreased demand for commercial planes.

“Our Dreamliner planes are very strong, light, and can carry more people. Airlines care about maximising the profits and efficiency and that is why Dreamliner is such a successful plane as it consumes 15% less power than other planes,” said Dunn.

Airbus may stop A380 production as orders dry up