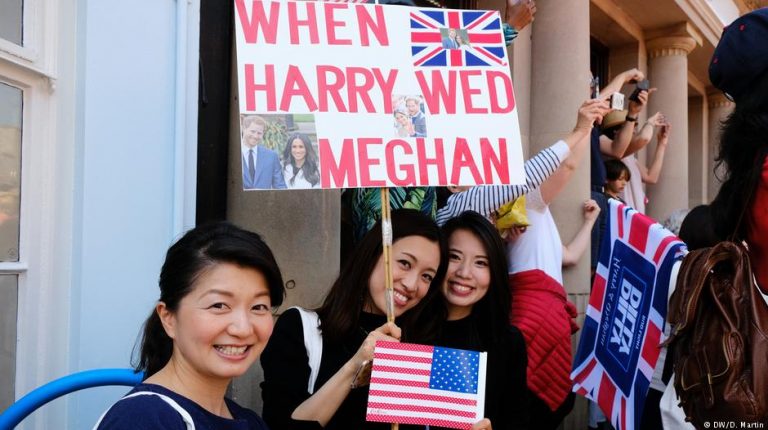 On the surface, Harry and Meghan’s royal wedding had all the glitz and glamour you would associate with such an occasion. But now accusations of racism-tinged media coverage have taken some of the shine off the gloss.It was a wedding fit for a (new) duchess: In one of the biggest TV events of the year, an estimated two billion people tuned in to watch Meghan Markle marry Prince Harry on Saturday in a joyous, if somewhat unusual, celebration. And media across the world were scrambling to examine every angle of the Meghan and Harry story.

Unsurprisingly, not everyone got it right. German public broadcaster ZDF came under fire for what was deemed racist remarks during its wall-to-wall coverage of the wedding; the journalists mused over the texture and styling regime of Meghan and her mom’s black hair and repeatedly referred to the bride and her guests as exotic. Viewers and Twitter users were not amused. ZDF said in a statement that it takes those concerns seriously.

To be clear — this was a wedding fraught with questions of culture, race, and gender. Consider Meghan Markle, a successful American actress and a biracial divorced woman, challenging centuries-old tradition in a deeply staid institution. Consider the ceremony itself, featuring a black bishop, supportive of LGBTQ rights, delivering a rousing sermon; and then a black choir performed “Stand By Me.” This was new and fresh, and as Karen Attiah, a Washington Post editor, said, an “overt celebration of black American culture.”

But Meghan and Harry aside, this is about what we say when we talk about race. And media — journalists in particular — bear a crucial responsibility in setting the tone. After all, if we aren’t careful with our words, why should anyone else be?

Exotic, for example — a term I myself, an American journalist of Sri Lankan Tamil extraction living in Berlin, have been on the receiving end of time and again in Germany — is best reserved for tropical fruit and safari animals, not people. This isn’t just semantics, either. Words are laden with history and meaning and context, and “exotic” smacks of the post-colonial coverage still scattered across media and culture in both the US and Germany, the two societies I call home.

And it is indeed important to note that Germany is not alone here. America is hardly a paragon of post-racial identity politics — think s***hole countries and Fox News calling Lebron James “barely intelligible.” Racial biases in media coverage — particularly towards black men — have come sharply into focus in the past few years with the police killings of Michael Brown and Philando Castile and the emergence of the Black Lives Matter movement.

That’s why it’s equally, if not more important, to talk about what lies beneath our words: our understanding of minorities, people of color, and underrepresented groups. As long as newsrooms do not reflect the societies they serve and represent, biases and stereotypes will inevitably creep into their reporting.

The news outlets I worked for in the US actively sought to diversify their newsroom staffs, yet the numbers — in 2015, minorities made up only about 12 percent of the workforce according to the American Society of News Editors — are still troubling. In Germany, where at least 20 percent of the population have immigrant roots, the trend is even more pronounced. It’s difficult to find concrete numbers on newsroom diversity in Germany, but various research has identified the need to create more inclusive media outlets. As DW’s newsroom has continued to diversify, our storytelling has grown richer, more nuanced. Frankly, it’s gotten better. And while we’re here — diversity of gender, economic class, and political views are also crucial to balanced coverage.

Including a spectrum of political views is vital, but only as long as it’s constructive. We’ve seen members of the right-wing in particular arguing for the right to cast off the “thought police” shackles and break taboos on race and identity. But what does that look like? German public broadcaster MDR recently attempted to host a talk show reflecting on political correctness in our political and public sphere. The title of the show was “Are we allowed to say ‘N*****’ today?” Oh, and the commentators invited to debate the topic were, inexplicably, only white Germans. (An uproar ensued and MDR had to cancel the show).

So let’s talk openly about words and what they mean, and race and what constitutes racism — but on an even playing field, where minority voices are well-represented, and words are not wielded as weapons. That leads to constructive dialogue. Who knows, maybe Meghan and Harry gave us the impetus we needed.