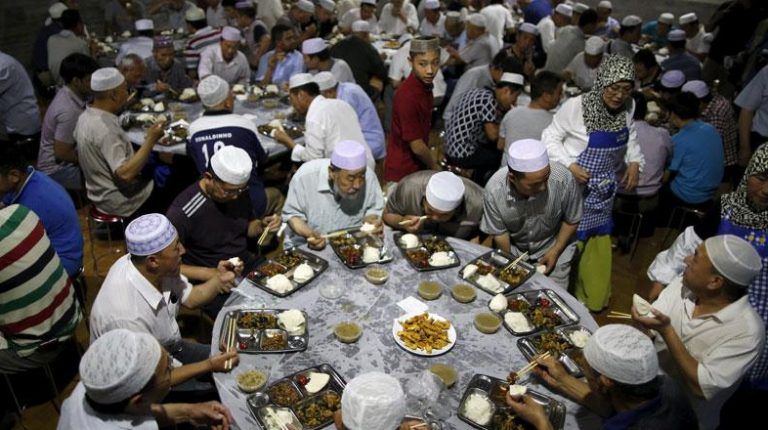 Kazakhstan is the largest Islamic country in the world in terms of area. It consists of 16 provinces. The Kazakh people account for 53.4% ​​of the total population, most of whom speak Kazakh. It is the official language of the state and has Turkish origins. About 70% of Kazakhstan’s inhabitants are Muslims.
The country borders Turkmenistan, Uzbekistan, and Kyrgyzstan to the south; Russia to the north; Russia and the Caspian Sea to the west; and China’s Xinjiang Uygur Autonomous Region to the east.
The holy month of Ramadan is a time for reciting Quran and acts of charity by Muslims in Kazakhstan. The customs of this holy month are long inherited in Kazakhstan. A few days before Ramadan, the Muslims prepare to receive the month through cleaning mosques and public areas to hold Tarawih prayers.
Kazakhstan has many beautiful, large mosques built on vast areas, such as Nur-Astana Mosque in Astana, the capital of Kazakhstan; Central Mosque Almaty; Mausoleum of Khawaja Ahmed Yasawi Mosque in Turkistan; and Manjali Mosque in Atyrau. One of Kazakhstan’s wonders is the underground Becket Ata Mosque in the area Oglandy. The mosque was built in the 17th century.
Before iftar (breakfast meal), daily sermons are delivered in most of the mosques to educate worshippers on religious teachings. More than 2,000 copies of the Holy Quran and 10 tonnes of dates are distributed among the Kazakh people. Preaching convoys are also held throughout Kazakhstan, and it lasts for 75 days before Ramadan for preaching and guidance in the remote villages.
The people flock to mosques in huge numbers during Ramadan to perform Tarawih prayers.
Before the Maghrib (sunset) prayer, the fasting people go in large numbers to “Ramadan street banquets” which are called “mercy restaurants” in Kazakhstan. These banquets are usually held in public squares and inside giant Kazakh mosques, estimated at 2,000 mosques.
Nur-Astana is one of the largest mosques in Central Asia and can accommodate up to 5,000 worshipers. It is located in the capital of Kazakhstan, Astana. It has a huge, golden dome, which is 40 metres high and is surrounded by four 64-metre high minarets. The mosque was built in 2005 on an area of 8,000 sqm.

After the Maghrib prayer, the worshipers are invited to special banquets set up by undergraduates. These street banquets serve juices and salads as well as the main dish, called Plov. It is the Kazakh version of Pilaf rice. This dish is popular at large gatherings. It consists of rice served with lamb (sometimes beef), onions, and carrots. Kumiss, fermented mare milk, is a popular drink with many Kazakh people. The fermentation process removes the lactose from the milk making it a good alternative to cow milk for lactose intolerant people. Shubat is the camel milk equivalent to kumiss and is made in the same way. Both kumiss and shubat are reputed to have wonderful health benefits. Because the weather is particularly challenging, the food was, traditionally, very nutritious and contained a lot of fat to provide energy. This means that food can sometimes seem too oily or greasy to people who are not used to it.

One of the special customs of Kazakhs is that neighbouring families rotate hosting iftars during Ramadan at their homes.
One of the most famous dishes of all time, beshbarmak, the national dish of Kazakhstan, means “five fingers,” referring to the fact that it is eaten by hand.  It consists of boiled meat (traditionally horse, but nowadays often lamb) and large noodles that look like sheets of lasagne in an onion gravy/broth.

The Kazakh people do not add spices to meat as they think that the meat should be eaten as it is, so that it does not lose its original taste.

Many events take place in Kazakhstan during the month of Ramadan, as mass street banquets are held in different cities, new mosques are opened, and competitions for reciting the Holy Quran are held.

In Ramadan, the government forbids the sale of alcoholic beverages, and whoever violates that rule is penalised.