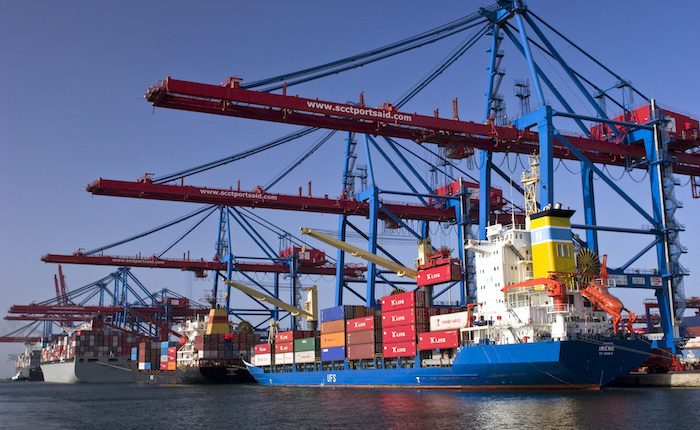 Lars Christensen, the CEO of SCCT, said that the company is targeting to maintain the performance rates achieved in 2016 and 2017. However, there are many obstacles and challenges in terms of transportation activities and logistics locally and globally.

In his first interview since he was appointed as CEO of the company, Fang said the SCCT is working to increase the station’s efficiency to maintain its current customers and attract new ones. The station ranked first in terms of performance rates amongst the parent company’s stations across the world last year.

The SCCT is one of the five largest container trade companies in the Eastern Mediterranean with a capacity of 5.4m containers.

Fang pointed out that the station’s operation was greatly affected because of the exiting of many navigation lines from East Port Said in April 2017.

Hany El Nady, head of PR at the SCCT, said there are no indicators for the return of navigation lines despite the positive procedures made by the Suez Canal Economic Authority to provide 50% discounts for the rates of trade transit in the six ports of the authority: Ain Sokhna, East and West Port Said, El Tor, Al-Adabiya, and Al-Arish.

El Nady pointed out the role of Maersk, the main shareholder in the station which increased its container trade rate in 2017 by 40% compared to 2016, is to maintain trade rates and send a positive message to bring back competitiveness as well as stress partnership and cooperation between the government and investors.

In April 2017, because of a coalition of five maritime shipping companies leaving for Greece’s Piraeus port, the number of ships in East Port Said Port declined from 1,735 to 1,402.

El Nady stressed the keenness of Maersk to maintain its investments in Egypt and be present as one of the entities contributing to achieving development in the SCZone.

Fang said the SCCT is working on long-term plans and seeks to maintain its opportunities despite the fierce competition with the ports in the Eastern and Southern Mediterranean.

He pointed out that there are negotiations taking place with the Egyptian government to put East Port Said Port back on the competition map.

Mohab Mamish, chairperson of the Suez Canal Authority, said he is exerting great efforts to maximise the utilisation of East Port Said port, especially with the development of the SCZone.

“We hope that the help of Maersk continues this year, however, there are many factors that affect the decision of continuation this year, including prices and volume of operations globally. What the company did last year was a positive message that supports the Egyptian government within its efforts to improve the situation,” Mamish added.

“The property structure of the company is currently without modifications, and the navigation line Cosco still owns 20% of the company’s shares,” Fang said in response to a question about a conflict of interest with Cosco, which is a competitor and implements its operations from Piraeus port.

The company’s ownership is distributed as 55% for Maersk, 20% for Cosco, 10.3% for the Suez Canal Authority, 5% for the National Bank of Egypt (NBE), and 9.7% for a group of private sector investors.

Lars added that Cosco is an important partner in the station and is one of the most important and largest navigation lines in the world. It cannot be blamed for its decision to move its operations outside East Port Said Port due to the competitive conditions.

Fang added that the return of Cosco depends on two main factors: connecting the east the canal to its west and making decisions that contribute to restructuring the fees of ports to enable East Port Said Port to enter real competition with the ports of the Eastern and Southern Mediterranean.

He said that the Egyptian government is establishing four tunnels under the Suez Canal and connecting the east to the west is one of the main factors to ensure the success of the development work in East Port Said especially and North Sinai generally. It will contribute to attracting more investments to the region.

He said that the new Suez Canal has contributed to reducing wait times and sped up the pace of ships leaving and entering the port. “Implementing that project was strategic for us and all the area of East Port Said. It was clearly seen in the volume of traded operations,” he added.

Regarding the awaited competition with the government’s direction to implement a new station for containers in East Port Said, he added that having competitors will be very healthy in terms of generating jobs and supporting the Egyptian economy.

Fang explained that the SCCT will continue its efforts to develop Egyptian society through its social responsibilities in terms of education, health, and environment especially in Port Said and South Sinai, which is in line with the state’s general policy, and stems from a deep belief in the importance of its societal role.